Peyton Kennedy is a Canadian actress best known for her role of Dr. O in the PBS Kids television series ‘Odd Squad’. In her childhood, she loved to build toy robots and wanted to study robotics when she grew up. She was inspired to start acting at the age of six after reading ‘Harry Potter’ novels and watching movies. In 2011, she started her training to become an actress. The same year, she attended ‘The Canadian Model and Talent Convention’ for the ‘Photography Go-See Award’ event and came first. In 2012, she started her acting career by landing the role of Gwen Pelway in the movie ‘An Officer and a Murderer’. She made her TV debut with the show ‘Copper’ in 2013. In the ensuing years, she has worked in many television series and movies while receiving numerous awards for her performances. She also plays the piano, flute, and ukulele. She is active on various platforms of social media and has posted many photos with her mother. Canadian People
Capricorn Actresses
Canadian Actresses
Child And Teen Actresses
Women Film & Theater Personalities
Career
Peyton Kennedy started her acting career in 2012 with the role of Gwen Pelway in the movie ‘An Officer and a Murderer’. She made her TV debut in 2013 in the TV series ‘Copper,’ in which she played the role of Clara Purvis. She landed the recurring role of Dr. O in the PBS Kids television series, ‘Odd Squad,’ which she portrayed from 2014 to 2017. She gained immense recognition and many awards for this work. In 2014, she made appearances in movies like ‘The Captive’ and ‘Cut Bank,’ and a short film named ‘Dorsal.’ She won the ‘Joey Award’ in the category Young Actress in a Feature Film Principle or Supporting Role for her role in ‘The Captive.’
In 2015, she made appearances in the TV series ‘Between’ and ‘Murdoch Mysteries’. She acted in movies like ‘Lavender’ (2016), ‘American Fable’ (2016), and ‘Odd Squad: The Movie’ (2016). Her 2017 film credits include ‘XX’, ‘Sunny Side Up’, ‘Pond life’, ‘What the Night Can Do’, and ‘Cardinal’. She then starred in the Netflix series, ‘Everything Sucks!’ in 2018 as Kate Messner. Later, she appeared as Betty Nelson in the TV series ‘Grey’s Anatomy’ (2018–19).
You May Like

Canadian Female Film & Theater Personalities
Canadian Film & Theater Personalities
Capricorn Women
Continue Reading Below
Family & Personal Life
Peyton Kennedy was born on January 4, 2004, in Toronto, Ontario, Canada. Her mother’s name is Mercedes Mason and she also has a brother. When she was just a kid, she took an eager interest in building toy robots and reading about them. At the age of six, after reading Harry Potter novels and watching movies, she got inspired to choose acting as her career. In 2011, she started her training for becoming an actress and won the first place at the ‘Canadian Model and Talent Convention for the Photography Go-See Award’.
She is also a talented musician and plays the piano, flute, and ukulele very well. Her hobbies include reading, painting, swimming, playing baseball and soccer. When it comes to food, her favorite is pasta and Menchie's frozen yogurt. For the latter, she always looks for a franchise wherever she travels. Though she has posted photos with her mother on social media, she has kept her father’s identity a secret. She once claimed that her real father very much resembles her on-screen dad Patch Darragh with whom she had worked in ‘Everything Sucks!’
She is exceptionally close to her ‘Everything Sucks!’ co-star Brendan Heard. They both have spent a holiday together, but neither has confirmed whether they are dating. Her fans proclaim that she looks similar to Gaten Matarazzo - the star of ‘Stranger Things’.
Her kissing scene in ‘Everything Sucks!’ with a much older girl co-star was considered “gross” by some viewers due to their age difference. It also ignited the rumors that Peyton is a lesbian in real life. She neither accepted nor denied the rumors. She is currently believed to be single. 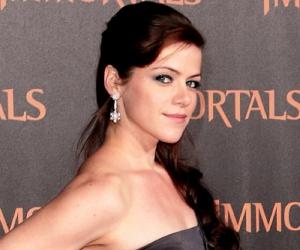