Advanced Search
Kelly Rowan is a Canadian actor and former model, best known for playing pivotal roles in series and TV movies such as ‘Lonesome Dove: The Outlaw Years’ and ‘Adrift.’ Born and raised in Ottawa, Ontario, Canada, Kelly became interested in the prospect of becoming an actor much later in life, during her college years. She dropped out of the ‘University of Western Ontario’ to pursue acting and enrolled at the ‘British American Drama Academy.’ After being trained in acting for a while in New York, she began working as a model. She made her acting debut in 1984. During her early years as an actor, she appeared in guest roles in series such as ‘Hangin’ in’ and ‘Night Heat.’ Her breakthrough came in 1993, when she won a ‘Gemini Award’ for her performance in the TV film ‘Adrift.’ She also played one of the main roles in the series ‘Lonesome Dove: The Outlaw Years.’ She played a key role in the series titled ‘The O.C.’ in 2003. In addition, she has also appeared in supporting roles in feature films such as ‘Jack and Jill vs The World’ and ‘Proximity.’ Tatiana Maslany
DID WE MISS SOMEONE?
CLICK HERE AND TELL US
WE'LL MAKE SURE
THEY'RE HERE A.S.A.P
Quick Facts

Canadian People
University Of California, Los Angeles
Scorpio Actresses
Canadian Actresses
Actresses Who Are In Their 50s
Childhood & Early Life
Kelly Rowan was born on October 26, 1965, in Ottawa, Ontario, Canada, to upper-middle-class Canadian parents. She attended Toronto’s ‘Northern Secondary School.’ Although she had a slight inclination toward modeling, acting was something she did not think of at all.
She began modeling while studying English literature at the ‘University of Western Ontario.’ She made enough money to be able to pay for her college educationShe slowly began doing commercial advertisements, which sparked her interest in acting.
She got the first acting project of her career while still in college. She had to choose between her college education and acting career, and she chose acting. She thus moved to England to study acting at the ‘British American Drama Academy.’
She subsequently moved to US and settled in New York. There, she earned a living through modeling and auditioned for film and TV roles. Additionally, she also began attending the ‘Neighborhood Playhouse’ in New York to hone her acting skills.
Continue Reading Below
Career
She made her acting debut with an episode of the series titled ‘Hangin’ In,’ titled ‘The Party’ in 1984. The following year, she made her film debut, appearing as ‘Stephanie’ in the direct-to-video film titled ‘My Pet Monster.’
In 1986, she appeared in small roles in TV films such as ‘The Truth about Alex’ and ‘The High Price of Passion.’
The 1987 supernatural horror film titled ‘The Gate’ featured her in the supporting role of ‘Lori Lee.’ The film received positive reviews and was a moderate commercial success, too.
In the next few years, she carried on with guest roles in series such as ‘War of the Worlds,’ ‘Street Legal,’ and ‘Growing Pains.’
In 1991, she received a huge break when she was signed by Steven Spielberg to play a supporting role in the film ‘Hook.’ The same year, she appeared in a 3-episode supporting role (as ‘Dana’) in the series ‘Dallas.’
In the early 1990s, she appeared in supporting roles in TV films such as ‘Exclusive’ and ‘Black Fox: Good Men and Bad.’ She got a breakthrough role in the 1996 series ‘Lonesome Dove: The Series.’ The series was renamed ‘Lonesome Dove: The Outlaw Years’ during the 1995–1996 season. Kelly appeared in the second season of the series, playing ‘Mattie Shaw.’ The series was a critical and commercial success.
In the mid-1990s, she appeared in supporting roles in films such as ‘Assassins’ and ‘Candyman: Farewell to the Flesh.’ Both the films failed critically and commerically.
In 1997, she appeared in a key role in the TV film ‘A Match Made in Heaven.’ He then appeared in a supporting role in the 1998 TV film ‘When He Didn’t Come Home.’
The same year, she appeared in one of the lead roles in the Samuel Jackson-starrer film ‘One Eight Seven.’ The film was a failure at the box office and was also rejected by critics.
Continue Reading Below
In the late 1990s and the early 2000s, she appeared in supporting roles in a string of TV films, such as ‘A Crime of Passion,’ ‘The Truth About Jane,’ ‘Scorn,’ and ‘A Girl Thing.’
In 2001, she appeared as ‘Anne Conroy’ in the action thriller ‘Proximity.’ The film received moderate reviews from both critics and audiences.
In 2002, she appeared in one of the lead roles in the Christmas TV movie titled ‘The Man Who Saved Christmas.’ Set against the backdrop of the First World War, the film was a critical success and received good ratings.
In 2002, after appearing as ‘Marian McNorris’ in four episodes of the series titled ‘Boomtown,’ she appeared as ‘Kirsten Cohen,’ one of the lead characters in the TV series ‘The O.C.’
Following the immense critical and commercial success of the series, Kelly became a household name in the country. Her career received yet another breakthrough.
In 2006, she appeared in the main role in the TV film titled ‘Eight Days to Live.’ Over the next few years, she appeared in key roles in TV films such as ‘The Good Times are Killing Me’ and ‘In God’s Country.’
In 2011, she appeared in one of the main roles in the TV film ‘Cyberbully’ and then appeared in a leading role in the 2012 series ‘Perception.’ The latter featured her as ‘Natalie Vincent/Dr. Caroline Newsome.’
In the more recent years, she has appeared in guest roles in series such as ‘Castle’ and ‘Murdoch Mysteries.’ In addition, she has also appeared in feature films such as ‘Rufus’ and ‘Jack and Jill vs. The World’.
She has produced a few episodes of the series ‘Child Star’ and a few TV movies, such as ‘Tangled,’ ‘She Drives Me Crazy,’ and ‘Eight Days to Live.’
Family & Personal Life
Kelly Rowan dated Canadian media magnate David Thomson, 3rd Baron Thomson of Fleet, for a while, before they announced their engagement in June 2007. They had a daughter in April 2008. However, the couple had broken their engagement shortly before the birth of their child.
Kelly has been good friends with actor Kelly Rutherford all her life.

See the events in life of Kelly Rowan in Chronological Order 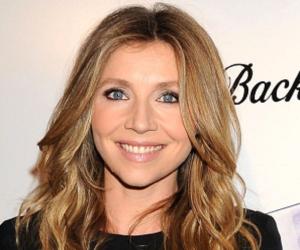