Advanced Search
Christina Ochoa is an actress, marine biologist, author, and producer from Spain. She is the grandniece of Nobel laureate Severo Ochoa. Ochoa grew up in a household where both her scientific acumen and artistic sensibilities received equal encouragement. After completing her education that took her from Spain to Australia and America, she became an active social media based science educator. She has hosted and served as a keynote speaker at numerous scientific conferences and web shows. However, she came to realise that while science has been one of her interests, acting is her true passion. Ochoa started performing initially as a hobby and relocated to Madrid to further her grasp on the subject and hopefully land a few roles. In 2008, she made her screen debut in the comedy series ‘La que se avecina’. Since then, she has appeared on stage as well as played lead characters in multiple television shows. As a writer, she is a regular contributor to Vogue Spain, H, and El Imparcial magazines. In 2009, she became a member of Mensa. Stella Banderas
DID WE MISS SOMEONE?
CLICK HERE AND TELL US
WE'LL MAKE SURE
THEY'RE HERE A.S.A.P
Quick Facts

Spanish People
Spanish Women
Aquarius Actresses
Spanish Actresses
Actresses Who Are In Their 30s
Accomplishments in the Scientific Field
Since leaving school, Christina Ochoa has served as a host and keynote speaker at a variety of scientific conferences and shows: the college prep program MESA, Bitesize TV's ‘Chaotic Awesome’, and The Young Turks network’s ‘NERD ALERT’ to name a few. She is the current host of an educational podcast called ‘Know Brainer’.
She is an active member of the ‘Los Angeles Science for Society’, an organization that champions science in society and scientific literacy and supports the Intel Science and Engineering Fair (ISEF). In 2017, she participated in the annual event as a commentator.
In the recent years, she has appeared as an expert guest on ‘Professor Blastoff’, a scientific comedy podcast; ‘Talk Nerdy’, a podcast hosted by Cara Santa Maria; and numerous online STEM Education platforms.
Recommended Lists:

Female T V & Movie Producers
Spanish T V & Movie Producers
Women Film & Theater Personalities
Spanish Film & Theater Personalities
Continue Reading Below
Career in the Entertainment Industry
Despite having a significant career in the scientific field, acting has always been her passion. Christina Ochoa began by appearing in several plays at Little Theatre of Alexandria in Washington, D.C. She Later decided to relocate to Madrid, where she started taking acting lessons and playing small roles on stage.
She debuted on the small screen in 2008 in the episode ‘Un fontanero, un calentón y una abuela motorista’ of the Spanish comedy series ‘La que se avecina’. In 2009, she played the character Gabriela in the TV movie ‘[email protected]’. Staring alongside Stephen Amell and Deirdre Wall, Ochoa appeared in her first American project, a short film named ‘Stay with Me’ in 2011. It was the also the first project of her production company QE (Quantum Entanglement). She made cameo appearances in Fox’s ‘I Hate My Teenage Daughter’ (2011), ABC’s ‘Modern Family’ (2012), and ABC’s ‘The Neighbors’ (2013).
In 2014, she co-wrote several episodes as well as served as a correspondent in the web series ‘Chaotic Awesome’. In the same year, Ochoa was cast as Karen Morales in El Rey Network’s action-drama ‘Matador’. Since 2016, she has been appearing as Ren Randall in TNT’s drama ‘Animal Kingdom’. She landed her first leading role in Syfy’s short-lived action-grindhouse series ‘Blood Drive’. Despite high ratings, the show was cancelled after one season.
In her newest series, The CW’s ‘Valor’, she plays Chief Warrant Officer 3 Nora Madani. Created by Kyle Jarrow, the series premiered on October 9, 2017.
Recommended Lists:

Spanish Women Film & Theater Personalities
Aquarius Women
Writing Credits
As a writer, Ochoa’s work was first published in ‘Vogue Spanish’ in October 2010. For the entertainment magazine ‘H,’ she writes book reviews and profile pieces. She also writes a monthly film column for the Puerto Rican news website El Imparcial.
Personal Life
Ochoa was born as Cristina Ochoa Lopez on January 25, 1985, in Barcelona, Spain. Her father, Victor Ochoa, is an activist, painter, graphic designer, and master muralist. As a youth, she lived in Madrid, Barcelona, and Miami. Her granduncle, Severo Ochoa, a Spanish-American physician and biochemist, won a share of the Nobel Prize for the discovery of mechanisms in the biological synthesis of RNA and DNA.
She studied at the Santa Isabel La Asuncion in Madrid and later enrolled at Universidad de las Palmas de Gran Canaria, in the Canary Islands for an undergraduate degree in oceanographic engineering. She then went to Australia where she attended the James Cook University to study marine biology with special emphasis on elasmobranchii, a subclass of chondrichthyes or cartilaginous fish. She was taking particle physics classes at Universidad Nacional de Educacion a Distancia (UNED) when she decided to pursue a career in acting and left before completing her masters.
According to reports, Ochoa previously dated actor Derek Theler. She was engaged to actor Nathan Fillion sometime between 2013 and 2014.
Trivia
In 2011, Ochoa won the Los Angeles Movie Award for Best Actress for ‘Stay with Me’. 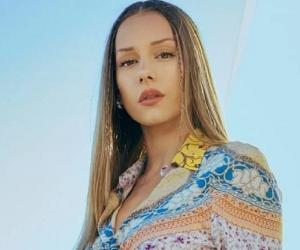 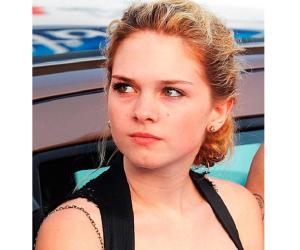