Paul Walker was an American actor famous for his starring role in ‘The Fast and the Furious’ franchise. He had also appeared in other popular movies such as ‘Varsity Blues’, ‘Eight Below’, ‘Timeline’, ‘Into the Blue’, ‘Joy Ride’ and ‘Running Scared’. Born as the son of a fashion model, he inherited his mother’s good looks, confidence and poise. Exposed to the world of show business as a toddler, it is not surprising that he developed an early interest in acting. He was just two when he began modeling and after a few years started appearing in television series in guest roles. He ventured into filmdom as a teenager when he bagged a role in the horror/comedy ‘Monster in the Closet’ and there was no looking back. He effectively left behind his television days and soon gained a reputation as a popular teen star. His roles in the coming-of-age films like ‘She's All That’ and ‘Varsity Blues’ made him a well-known face and he was able to easily make the transition to more mature roles. He received the opportunity of a lifetime when he was chosen to play Brian O'Conner in the street racing action film ‘The Fast and the Furious’ which established him as a highly successful Hollywood star. The life of this talented actor was tragically cut short in a fatal car accident in 2013. Macaulay Culkin
12th September In History
DID WE MISS SOMEONE?
CLICK HERE AND TELL US
WE'LL MAKE SURE
THEY'RE HERE A.S.A.P
Quick Facts

American Celebrities
American Men
California Actors
Tall Celebrities
Tall Male Celebrities
Childhood & Early Life
He was born as Paul William Walker IV on September 12, 1973, in Glendale, California, U.S. to Cheryl Crabtree and Paul William Walker III. His mother was a fashion model while his father was a sewer contractor and a fighter. He had four younger siblings.
He began modeling as a toddler and starred in a television commercial for Pampers. As he grew up, he began taking up roles in television series such as ‘Charles in Charge’, ‘Highway to Heaven’ and ‘Who's the Boss’.

He made his film debut in 1986, when he was selected to play the role of “Professor" Bennett in the horror/comedy film ‘Monster in the Closet’. The next year he appeared in ‘The Retailiator’ (aka Programmed to Kill), a low budget cyborg action film.

He graduated from Sun Valley's Village Christian School in 1991, and attended several community colleges in Southern California, majoring in marine biology. He was a fan of marine biologist Jacques-Yves Cousteau.

Even though he had a genuine interest in marine biology, he realized that he was more passionate about acting and decided to pursue acting as a full-time career. 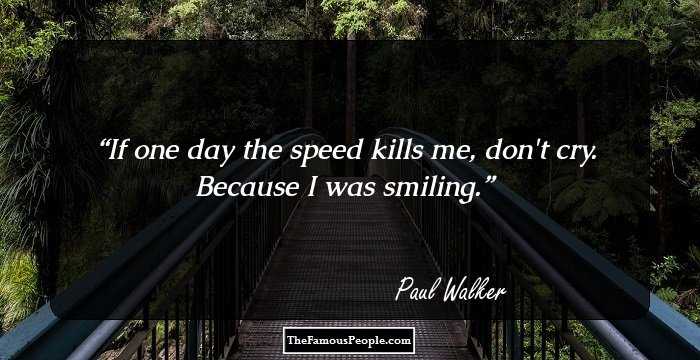 Quotes: Me, I
Continue Reading Below
Career
In 1993, Paul Walker played Brandon Collins on the CBS soap opera ‘The Young and the Restless’. This role got him noticed for his good looks and acting skills, and earned him a nomination for Outstanding Lead Actor in a soap opera at the Youth in Film Awards.

After appearing in movies like ‘Varsity Blues’ (1999), ‘She's All That’ (1999), and ‘The Skulls’ (2000), Paul Walker was chosen to play the protagonist—undercover cop Brian O'Conner—in the action film ‘The Fast and the Furious’, the first film in the franchise. He co-starred with Vin Diesel who would become one of his best friends over the years. The film proved to be a great commercial success and spawned several sequels in which Walker reprised his role.

In 2005, he appeared in the action film, ‘Into the Blue’ in which he was paired opposite Jessica Alba. The film was a box-office flop and received negative reviews.
Walker bounced back to being a bankable star with the family drama ‘Eight Below’ (2006) in which he played Jerry Shepard, a guide at an Antarctica research base under contract with the National Science Foundation. A Walt Disney production, the film opened at #1 and was a huge commercial success.
He portrayed a reformed criminal on parole who gets a second chance at life and begins work at a psychiatric hospital in the thriller film ‘The Lazarus Project’ in 2008.

He began the year 2013, on a good note and appeared in several movies including ‘Vehicle 9’, ‘Fast & Furious 6’, and ‘Pawn Shop Chronicles’. He was in the midst of filming ‘Furious 7’ at the time of his untimely death in November 2013. 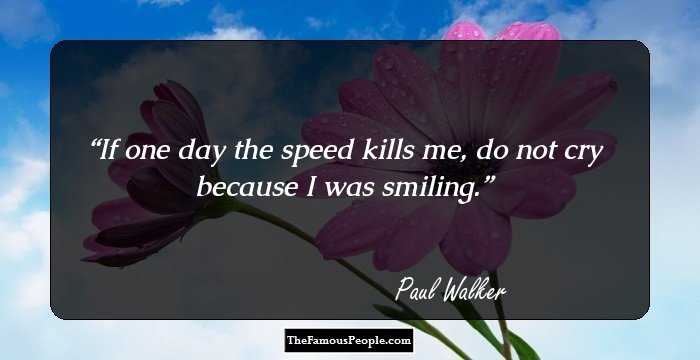 Quotes: Me, I
Major Works
He is best remembered for his role as Brian O'Conner, the main protagonist, in ‘The Fast and the Furious’ film franchise. He played the role of an undercover cop who must stop semi-truck hijackers from stealing expensive electronic equipment. This was the role that established Paul Walker as an accomplished Hollywood star.
Awards & Achievements
He won the 2014 MTV Movie Award for best on-screen duo, with Vin Diesel for the movie ‘Fast & Furious 6’ (2013). 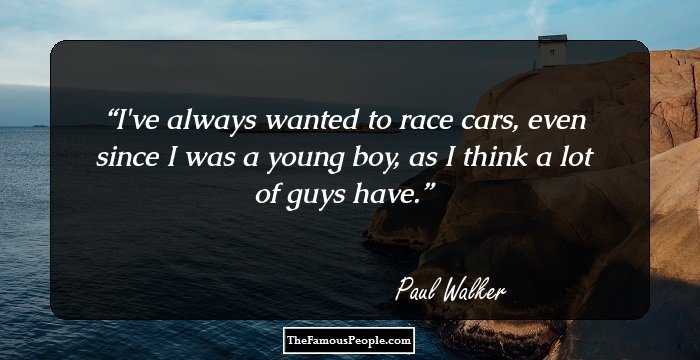 Paul Walker was once in a relationship with Rebecca Soteros and the couple had a daughter named, Meadow Walker.

Paul Walker died in a tragic car accident on November 30, 2013. The movie ‘Furious 7’ was in the middle of filming at the time of Walker's death and was released more than a year after his death.
Walker was close friends with his ‘The Fast and the Furious’ co-stars Tyrese Gibson and Vin Diesel. Diesel became Walker’s daughter Meadow’s godfather following Walker’s death.
Trivia
Paul Walker was the founder of "Reach Out Worldwide" (ROWW), an organization for providing relief efforts to regions devastated by natural disasters like earthquakes and hurricanes.

Quotes By Paul Walker | Quote Of The Day | Top 100 Quotes

See the events in life of Paul Walker in Chronological Order