Paul Thomas Anderson is an American screenwriter, director, and producer. He is also known as P. T. Anderson or PTA. The son of a radio and television personality, Anderson was raised within the entertainment industry. He had a loving relationship with his father who encouraged him to pursue his filmmaking aspirations. At the age of eight, he made his first film. By the time he reached adolescence, he had started writing scripts. He spent years developing his skills behind the camera before writing and directing his first formal production, a mockumentary film called ‘The Dirk Diggler Story’, in 1988. Anderson made his first feature production in 1996; it was a neo-noir crime thriller film called ‘Hard Eight’ that starred Philip Baker Hall, John C. Reilly, Gwyneth Paltrow, and Samuel L. Jackson. In the ensuing years, he worked with some of the best actors in the industry including Daniel Day-Lewis, Joaquin Phoenix, and Philip Seymour Hoffman and has been nominated for eight Academy Awards. All of his films have received critical acclaim and movies such as ‘Boogie Nights’ and ‘There Will Be Blood’ have garnered commercial success as well. ‘There Will Be Blood’ is widely regarded as one of the best films of the 21st century and it, along with ‘The Master’ and ‘Inherent Vice’, were listed among BBC's 100 Greatest Films of the 21st Century so far.
Continue Reading Below 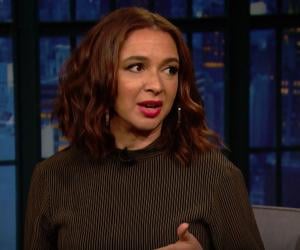 American People
T V & Movie Producers
American Men
American Directors
American TV & Movie Producers
Childhood & Early Life
Paul Thomas Anderson was born on June 26, 1970, in Studio City, Los Angeles, California, as one of the nine children of Edwina (née Gough) and Ernie Anderson. He has four brothers, Richard, Ernest, Michael, and Stephen, and four sisters, Amanda, Kathryn, Elizabeth, and Victoria.
Anderson’s father, the late Ernie Anderson, was a radio and television personality, horror host, and announcer, primarily known for hosting WJW Channel 8’s late-night horror movie presentation as "Ghoulardi". While Anderson had a strained relationship with his mother, he got on well with his father.
Ernie supported his son’s decision to pursue a career in the entertainment industry. Since he was a child, Anderson has been deeply interested in cinema and did not bother to come up with a backup plan if filmmaking were not to work out.
At the age of eight, he shot his first film. When he was 12 years old, his father purchased him a Betamax video camera which he used to make his films.
As a teenager, he switched to 8 mm film for a brief period before realising that video was simpler. He started writing content for his films when he became an adolescent and at the age of 17, he tried filming with a Bolex sixteen millimetre camera for the first time.
Anderson studied at several schools, such as Buckley in Sherman Oaks, John Thomas Dye School, Campbell Hall School, Cushing Academy and Montclair Prep. During his time at Montclair Prep, Anderson made his first real film, the mockumentary short ‘The Dirk Diggler Story’.
After he graduated from high school, he studied at Santa Monica College and later enrolled at Emerson College to pursue a degree in English but dropped out after two semesters.
His stint at New York University Film School was even shorter as he dropped out to become a professional associated with the film industry. He served as a production assistant on multiple TV movies, videos, and game shows in Los Angeles and New York.
Continue Reading Below
You May Like

The Sexiest Men Of 2020, Ranked
Career
After ‘The Dirk Diggler Story’, Paul Thomas Anderson continued to make short films. He directed the drama short ‘Cigarettes & Coffee’, which was released in 1993. Starring Philip Baker Hall, the film revolves around five people who are connected through a twenty-dollar bill.
‘Cigarettes & Coffee’ was screened at the 1993 Sundance Film Festival Shorts Program. He received an invitation to the 1994 Sundance Feature Film Program after he expressed his desire to make a full-length film with the script of ‘Cigarettes & Coffee’.
Anderson had Scottish filmmaker Michael Caton-Jones as his mentor at the Sundance Feature Film Program. He instantly recognized Anderson’s potential, realising that he had "talent and a fully formed creative voice but not much hands-on experience" and subsequently imparted to him some hard and practical lessons on filmmaking.
During his time at Sundance Feature Film Program, Anderson signed a deal with Rysher Entertainment to make his first feature film ‘Sydney’. However, his first project turned out to be a complete nightmare. Rysher re-edited his film after post-production. Anderson was fired from the project and could not release his own version.
Fortunately, he still had the workprint of the original film in his possession and decided to submit it to the 1996 Cannes Film Festival. It proved to be a good decision as the film received favourable reviews after it was screened in the Un Certain Regard section. He was told that he could release the film only after re-titling it. Hence, he renamed it ‘Hard Eight’ and put it out in 1996.
As a young man raised in Los Angeles, Anderson was intrigued by the adult film industry. The plot of ‘The Dirk Diggler Story’ was about a adult movie star named John Holmes and his 13-inch manhood. In his second feature, ‘Boogie Nights’ (1997), Anderson revisited the narrative and told the story of a nightclub dishwasher (Mark Wahlberg) whose circumstances make him a popular adult film actor under his stage name Dirk Diggler.
The film was a critical and commercial success and launched the career of not only Anderson but also of several others, including Wahlberg and Julianne Moore. At the 70th Academy Awards, the film received nominations for Best Supporting Actor (Burt Reynolds), Best Supporting Actress (Julianne Moore) and Best Original Screenplay (Anderson).
New Line Cinema had produced ‘Boogie Nights’ and was extremely satisfied with the film and its success. They allowed Anderson complete creative control over his next film. Initially, Anderson intended to make an “intimate and small film” but the script just “kept blossoming”. The resultant ensemble drama ‘Magnolia’ was released in 1999.
Starring Jeremy Blackman, Tom Cruise, Philip Seymour Hoffman, William H. Macy, Alfred Molina, Julianne Moore, and John C. Reilly, the film ‘Magnolia’ garnered massive praise for its acting, direction, storytelling, and its soundtrack. It earned Cruise a Best Supporting Actor Oscar nomination and won the Golden Bear at the Berlin International Film Festival. Anderson was also nominated for Best Original Screenplay Oscar.
Continue Reading Below
After ‘Magnolia’, Anderson expressed his desire to work with comedian and actor Adam Sandler in the future and stated that his next film would not exceed 90 minutes in running time.
In 2002, Anderson’s fourth feature film ‘Punch-Drunk Love’ was released. Praised by critics, the film won Anderson the Best Director Award at the 2002 Cannes Film Festival.
The 2012 release ‘The Master’ stars Joaquin Phoenix, Philip Seymour Hoffman, and Amy Adams and was produced by Anderson, JoAnne Sellar, Daniel Lupi, and Megan Ellison. The film officially premiered at the Venice Film Festival where it received the FIPRESCI Award for Best Film. Anderson has reportedly stated that ‘The Master’ is his most favourite among his own films.
He worked again with Phoenix in his next film, the 2014 neo-noir comedy-drama ‘Inherent Vice’. According to many critics, ‘Inherent Vice’ may someday become a cult classic. His second collaborative effort with Day-Lewis’ resulted in the 2014 period drama ‘Phantom Thread’. It garnered both Anderson and Day-Lewis Oscar nominations, for Best Director and Best Actor, respectively. The film was also nominated for a Best Picture Oscar.
Over the course of his career, Anderson has directed multiple music videos and short films as well. In 2000, he collaborated with Ben Affleck for a ‘Saturday Night Live’ segment called ‘SNL FANatic’. He staged a 70-minute play at the Largo theatre in 2008, which had his real-life partner Maya Rudolph in a leading role.
Major Works
Paul Thomas Anderson’s fifth feature film, ‘There Will Be Blood’ (2007) was inspired by Upton Sinclair’s novel ‘Oil!’ and starred Daniel Day-Lewis, Paul Dano, Kevin J. O'Connor, and Ciarán Hinds.
It told the story of a ruthless silver miner named Daniel Plainview deriving benefits from the Southern California oil boom of the late 19th and early 20th centuries. The film was a critical and commercial success. Made on a $25 million budget, it earned $76.2 million at the box office.
The film was nominated for eight Academy Awards and went on to win two, including Best Actor Award for Day-Lewis. Anderson himself was nominated for the Best Director and Best Adapted Screenplay Awards.
The film earned him two BAFTAs for Best Director and Best Adapted Screenplay and the Silver Bear Award for Best Director at the 2008 Berlin International Film Festival. Since its release, the film has been constantly listed as one of the best films of the 21st Century so far.
Personal Life
Paul Thomas Anderson had previously dated singer-songwriter and pianist Fiona Apple. In 2001, he began a relationship with actress, comedian, and ‘Saturday Night Live’ alumnus Maya Rudolph. The couple welcomed their first child, a daughter whom they named Pearl Minnie Anderson, on October 15, 2005.
Their second daughter, Lucille Anderson, was born on November 6, 2009. On July 3, 2011, Rudolph gave birth to their son, Jack Anderson. Their fourth child, Minnie Ida Anderson was born on August 1, 2013. The family resides in the San Fernando Valley.
Recommended Lists:
Film & Theater Personalities #2389
You May Like