Maya Khabira Rudolph is a popular American actor, musician, and comedian. Maya followed in her mother’s footsteps and started making appearances in local theatre during her childhood. She was also drawn towards music. As she grew older, Maya Rudolph began exploring areas, such as acting. Over the course of her career, she has tried her hand at playing the keyboard, singing, acting, and voice acting. Other than playing the keyboard, she also plays ukulele. She has stated in interviews that comedy is the most exciting thing that one could do. It was her dream from the age of five to appear on the ‘Saturday Night Live’ television show and her dream was realized in the year 2000. Maya Rudolph has been nominated for the prestigious ‘Emmy Awards’ and ‘Screen Actors Guild Awards’ for her performances. She has a Jewish ancestry from her father’s side and African-American lineage from her mother’s side. Jennette McCurdy
27th July In History
DID WE MISS SOMEONE?
CLICK HERE AND TELL US
WE'LL MAKE SURE
THEY'RE HERE A.S.A.P
Quick Facts

American People
Jewish Actresses
Actresses
Comedians
American Women
Childhood & Early Life
Maya Rudolph was born on 27 July 1972, in Florida, USA, to Minnie Riperton, a well-known singer and songwriter, and Richard Rudolph, a composer, lyricist, and producer. Her brother Marc grew up to become a music engineer. Her mother passed away due to cancer when Maya was seven years old.
Her family moved to California when she was very young. She did her schooling at ‘Sea School’ in St. Augustine and later graduated from the ‘Crossroads School’ in Santa Monica, California.
She then enrolled for a course in photography at the ‘University of California’ in 1990. She graduated with a Bachelor of Arts degree from ‘Porter College’ in 1995. While in college, she formed a musical band named ‘Supersauce’ with fellow students. 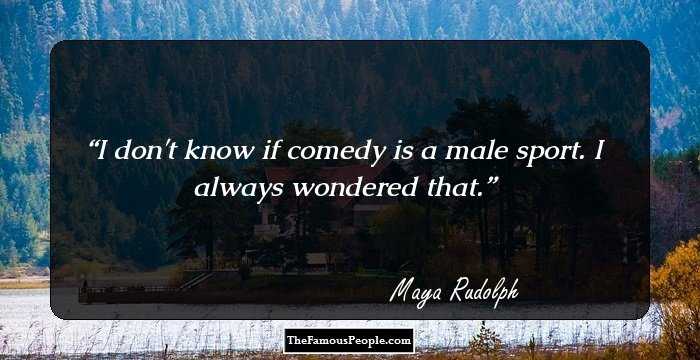 Continue Reading Below
Career
After college, Maya Rudolph pursued her interest and began her career with the improv comedy troop, ‘The Groundlings.’ She was able to perform well and showcase her talent in acting during this phase. She also appeared in minor roles in movies like ‘As Good As It Gets’ (1997) and ‘Gattaca’ (1997). Meanwhile, from 1996 to 1997, she appeared in the TV series ‘Chicago Hope.’
In 2000, she received a breakthrough when she joined ‘Saturday Night Live’ (SNL), a popular television live comedy show. She became a featured player in ‘SNL,’ appearing in three seasons from 1999 to 2000. Along with her acting capabilities, her talent as a singer was also used throughout the show. In the year 2000, she also landed a recurring role in the TV series ‘City of Angels.’
In 2001, Maya Rudolph became a cast member of ‘Saturday Night Live.’ She was much appreciated for her command over a wide range of accents that allowed her to portray different characters with ease. She played characters of various ethnicities, including Hispanic, Asian, North European, and Black.
She made her last appearance on ‘Saturday Night Live’ on November 2007. However, she went on to appear on the show as a guest in 2008, 2009, and 2010. She made a comeback on the show in 2012 as a host. During her time in the show, she came up with more than 50 celebrity impressions. Most popular of these include Barbra Streisand, Christina Aguilera, Darcel Wynne, Diana Ross, Halle Berry, Ivanka Trump, Jennifer Lopez, Lisa Kudrow, Lisa Ling, Michelle Obama, Nelly Furtado, Paris Hilton, Tyra Banks, Valerie Simpson, and Whitney Houston.
Her first major movie role came in 2006 when she was cast in the film ‘A Prairie Home Companion.’ She also starred in the movie ‘Idiocracy’ which released later that year.
In 2007, she voiced the character of ‘Rapunzel’ in the movie ‘Shrek the Third.’ Some of the other movies where she lent her voice include ‘Zookeeper’ (2011), ‘Turbo’ (2013), ‘The Nut Job’ (2014), ‘Big Hero 6’ (2014), and ‘Strange Magic’ (2015).
In 2010, Maya Rudolph acted in the movie ‘Grown Ups,’ starring alongside Adam Sandler. The next year, she appeared in the movie ‘Bridesmaids.’ In 2011, she also acted in ‘Friends with Kids.’
In 2013, she appeared in a supporting role in the film ‘The Way, Way Back.’ She also co-starred in the situational comedy ‘Up All Night.’ The following year, she appeared in the crime comedy–drama film ‘Inherent Vice.’
On May 2014, a television pilot titled ‘The Maya Rudolph Show’ was aired. The show was an attempt to revisit the classic variety show format. Maya Rudolph co-produced and starred in the show.
In 2015, she played roles in the romantic comedy movie ‘Maggie’s Plan’ and musical comedy film ‘A Very Murray Christmas.’ She was then seen in the comedy film ‘Sisters’ (2015) and drama film ‘We Don’t Belong Here’ (2017). Meanwhile, she also voiced a character in the animated comedy film ‘The Angry Birds Movie’ (2016).
From 2017 to 2019, she was cast in many films like ‘CHiPs,’ ‘Life of the Party,’ ‘Wine Country,’ and ‘Booksmart.’ On June 2017, she was chosen to voice a character named ‘Nanny’ in the animated comedy movie ‘The Willoughbys.’ 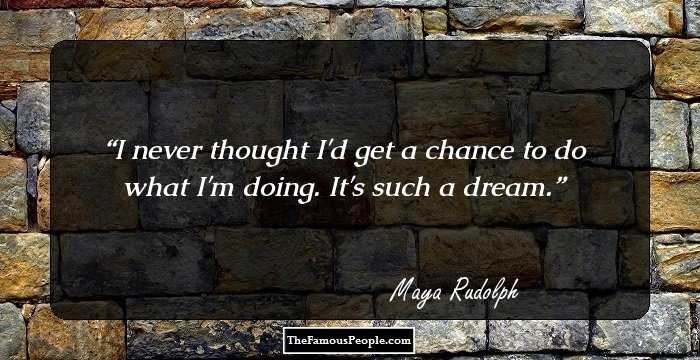 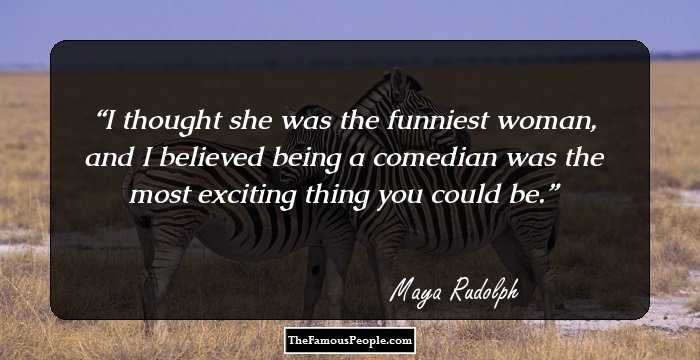 Quotes By Maya Rudolph | Quote Of The Day | Top 100 Quotes

See the events in life of Maya Rudolph in Chronological Order