Paul Stanley is an American singer, songwriter, guitarist, and painter, best known as a long-time member of the metal band ‘Kiss.’ Born into a Jewish family in New York City, he was introduced to various forms of music quite early in life. His parents were music lovers and mostly listened to classical and light music. Despite having a hearing problem in one ear, Paul grew up fascinated by music. He got a children’s guitar when he was 7 years old. He grew up admiring ‘The Beatles’ and ‘The Rolling Stones’ and got his first proper guitar at the age of 13. However, he was also interested in graphic arts. Nevertheless, he eventually chose music and began playing in bands as soon as he graduated high school. He was introduced to Gene Simmons and joined the band named ‘Kiss’ in the early 1970s. The band released their self-titled debut album in 1974. It was a huge success, and since then, the band has consistently been one of the top metal bands in the country, releasing 24 studio albums to date. Paul has also released two solo albums, ‘Paul Stanley’ and ‘Live to Win.’ American People
Rock Singers
Lyricists & Songwriters
Hard Rock Musicians
Heavy Metal Musicians
Childhood & Early Life
Paul Stanley was born Stanley Bert Eisen, on January 20, 1952, in Upper Manhattan, New York City, to Jewish parents. His father, William Eisen, was of Polish descent, while his mother, Eva Eisen, belonged to a family that had fled ‘Nazi’ Germany during the Second World War and moved to Amsterdam, Netherlands, and then to New York City.
Paul was the second-born child in the family and had an older sister. He had a birth defect in his right ear, because of which he was unable to hear from that side. However, despite that, he loved listening to music, as his parents were music lovers who listened to Beethoven and other classical musicians.
Paul found it extremely difficult to determine the direction of sounds, owing to his deformed ear. However, over time, he developed a good sense of hearing. He received his first children’s guitar when he was 7 years old. Some of his favorite musicians during his adolescence were ‘The Rolling Stones,’ Jerry Lee Lewis, Eddie Cochran and ‘The Beatles.’
When he was around 8 years old, his family moved to Queens, New York, where he kept practicing on his guitar. Observing his enthusiasm, his parents bought him a real guitar when he was 13 years old. This led him to practice even more. While he watched his favorite bands’ performances on TV, he aspired to perform like that someday.
He was also good at graphic designing, which he pursued while studying at the ‘High School of Music & Art’ in the New York City. Despite the fact that he was an extremely good budding graphic designer, he decided to pursue music as a career option. 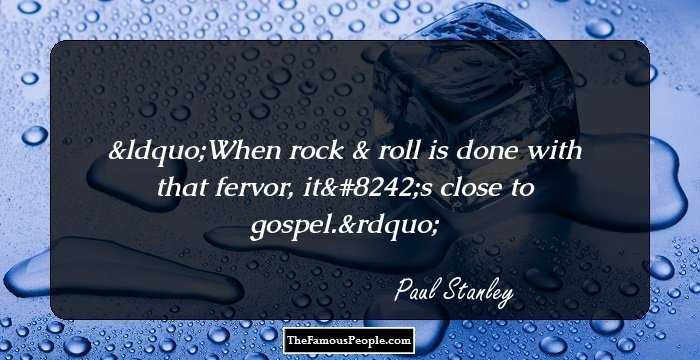 American Men
New Yorkers Musicians
Tall Celebrities
Tall Male Celebrities
Career
Paul initially joined a local band named ‘Rainbow,’ which he then left to join other bands such as ‘Uncle Joe’ and ‘Post War Baby Boom.’ Through Gene Simmons, he joined the band ‘Wicked Lester,’ which was later named ‘Kiss.’ The band began working immediately. They recorded their first album in 1972. Unfortunately, it remained unreleased
Kiss’ began working on another album immediately. Soon, they sealed a deal with ‘Casablanca Records’ and released their debut studio album, ‘Kiss.’ The album, which was released in 1974, opened to a lukewarm response.
The album sold about 75,000 copies and did not score even one hit single. None of its songs were featured on the major charts. The band went on many tours around the country to promote the album. Its sale eventually picked up pace, and the album eventually ended up selling 500,000 copies within a few years. The album was later certified “gold” by the ‘RIAA.’
Over the years, the album was termed one of the most successful ‘Kiss’ albums ever. Gene Simmons said that it was his most favorite album of their band. It was also featured on the ‘Spin’ list of essential glam rock albums.
However, the band made waves for one more reason: their stage presence. The band members wore outrageous costumes and performed with painted faces. The elaborate live performances that ‘Kiss’ put up became iconic over the years.
Following the slow response to their debut album, the band gained nationwide prominence with their subsequent albums, ‘Dressed to Kill,’ ‘Destroyer,’ and ‘Rock and Roll Over.’
Over the years, the band members kept changing, with Gene Simmons and Paul Stanley being the only constants. Stanley’s elaborate combination of costumes and make-up was named “Starchild.”
The band enjoyed great success toward the late 1970s and the early 1980s. In 1983, the band members stopped using make-up and eccentric costumes after a change in the line-up. That “unmasked” era of the band continued for more than a decade.
In 1983, the band released the album ‘Lick it Up,’ which was certified “platinum” by the ‘RIAA’ and was the band’s most successful album till then. The album appealed to youngsters, and the band earned a whole new fan base. By then, their music videos were also being played on major TV channels, such as ‘MTV.’
Continue Reading Below
By the mid-1990s, the band had become one of the most successful mainstream American bands ever, and their fans began asking for the original line-up to come together again. Thus, all the original members of the band re-united. Hence, the elaborate costumes and make-up also made a comeback into their live performances.
‘Kiss’ has released 24 studio albums until now and is regarded as one of the most successful rock bands of all time. They have sold more than 75 million copies of their albums worldwide till now. The band also holds the record for the highest number of “gold”-certified albums, with 30 “gold” albums to their credit, including their live albums and compilation albums. In 2014, the four original members of the band were inducted into the ‘Rock and Roll Hall of Fame.’
In 1978, the members of the band released their solo albums simultaneously. Paul’s album, titled ‘Paul Stanley,’ received moderate reviews and commercial success. However, it was termed the most “Kiss-like” album of all the four albums released.
Toward the late 1980s, Paul worked on another solo album, but his busy schedules with ‘Kiss’ got the album shelved. Nevertheless, some singles from the album were later released.
In 2006, Paul released his second solo album, ‘Live to Win.’ Later that year, he embarked on a nationwide tour to promote his album.
In 2012, Paul collaborated with Gene Simmons and other investors to start a restaurant chain called ‘Rock & Brews.’ 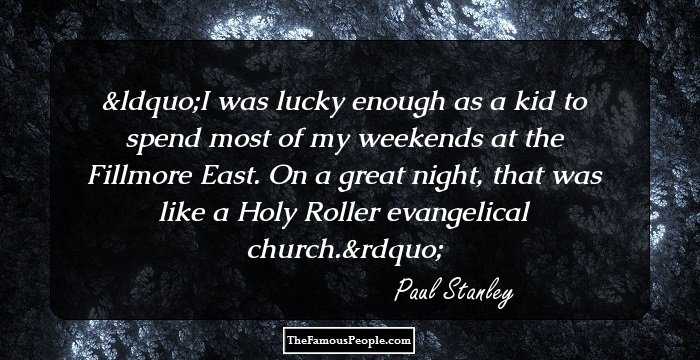 Male Singers
Male Musicians
Aquarius Singers
Male Guitarists
Personal Life & Legacy
Paul Stanley married actor Pamela Bowen in 1992. They had a son, Evan Shane Stanley. The couple divorced in 2001.
In 2005, Paul married Erin Sutton, his long-time girlfriend, and went on to have three children with her.
At the age of 30, he went through a reconstructive surgery to fix his right ear and later said that it was like a new life for him.
In 2011, Paul had a surgery done on his vocal cords. A few years prior to that, he had undergone two hip-replacement surgeries.
Recommended Lists:

Quotes By Paul Stanley | Quote Of The Day | Top 100 Quotes

See the events in life of Paul Stanley in Chronological Order