Paul Simon is an American musician, singer-songwriter, and actor. He is one of the most successful and respected songwriters of the rock era. He rose to fame in the mid-60s, with most of his songs being sensible and melodious. He is best known for his works that were produced after he joined hands with Art Garfunkel. The duo, which would go on to become famous, was formed in the year 1964. Some of their collaborative works include ‘The Sound of Silence,’ ‘Mrs. Robinson,’ and ‘Bridge Over Troubled Water.’ After parting ways with Garfunkel, Simon went on to establish a successful solo career. He even starred in the movie ‘One-Trick Pony,’ which was written by him. During the course of his successful career, he has won many awards, including 16‘Grammys.’Simon’s success story involves hard work, struggles, and rivalry that have inspired budding rock musicians. Paul Simon was bornon October 13, 1941, in Newark, New Jersey, USA. He was the first born child of his parents.He has a younger brother named Eddie.

While his father Louis Simon was an educator, his mother Belle Simon taught English at an elementary school. When Simon was a few months old, they moved to Flushing, Queens, in New York.

Right from his childhood, Simon had passion for baseball, jazz, and folk music. His parents played a key role in him developing passion for music. He also had a great spiritual influence from his mother who brought him up in accordance with the Jewish custom and heritage.

When Simon was 11 years old, he met Art Garfunkel, and the two became friends and later discovered that they shared a common interest –music. They formed a harmony duo, much like their favorite duo, ‘The Everly Brothers.’ They then made their stage debut at a junior-high school talent show.

They both enrolled at ‘Forest Hills High School’ and spent their time together, composing music. In 1955, the duo wrote a song titled ‘The Girl for Me,’ which became their first copyrighted song.

Simon graduated in 1963 with a major in English Literature. He later joined ‘Brooklyn Law School,’ but dropped out after some time. He then started focusing on music. 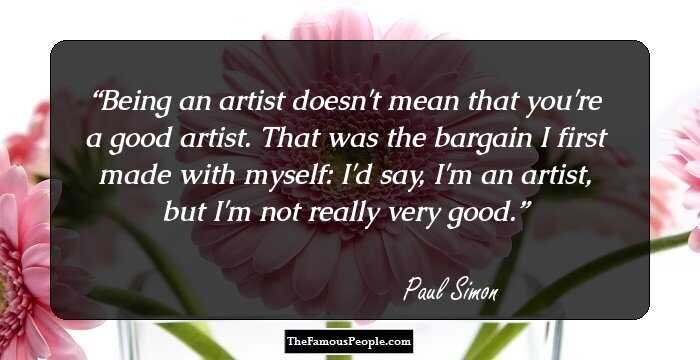 Simon’s career in music took off at a tender age of 11 when he performed alongside Garfunkel for a production of 'Alice in Wonderland.' From then on, they started performing as a rock duo under the name 'Tom and Jerry.'

Some of their early hits include 'Our Song' and 'That's My Story.' In 1964, the duo impressedClive Davis, the executive of ‘Columbia Records,’ who immediately signed them for an album.

‘Columbia Records’ registered the duo by their real name and released their first long play ‘Wednesday Morning, 3 A.M.’Unfortunately, the album did not perform well on the music charts.

Dismayed by the failure of his debut album, Simon headed to Europe. In Europe, he collaborated with Bruce Woodley, a member of the Australian rock band ‘The Seekers.’ Together, they composed a few songs like ‘Red Rubber Ball,’ ‘I Wish You Could Be Here,’ and ‘Cloudy.’

After he returned to the US, a producer named Tom Wilson reworked on his debut album and released it as a single titled ‘The Sound of Silence.’ The album became a massive hit. Its second volume was released as ‘The Sounds of Silence,’ in which Simon worked with Garfunkel.

The duo released numerous chartbusters right after their second LP. Meanwhile, they contributed to the soundtrack of the iconic film ‘The Graduate,’ which became a massive hit.

With back-to-back hits, Simon-Garfunkel was labeled as one of the most popular and influential duos of the era. But as they reached new musical heights, their partnership started to weaken.

Simon & Garfunkel came up with their last album ‘Bridge Over Troubled Water’ in 1970. Thanks to its innovative style of composition, the album did well on music charts. The title song became the cultural anthem for the youth.

The Simon-Garfunkel duo parted ways and moved on to build their respective career in different fields. Simon stuck to his music career and began working on imparting new dimensions to rock music.

In 1972, Simon recorded a self-titled solo album that included songs like ‘Mother and Child Reunion’ and 'Me and Julio Down by the Schoolyard.' The tracks gave birth to a new style of music which was quite distinct from his previous works, and earned rave reviews from the initially skeptical critics.

In 1980, Simon stepped into the field of filmmaking. Inspired by Woody Allen’s work in the film ‘Annie Hall,’ Simon wrote and starred in his movie ‘One-Trick Pony.’ He also recorded a soundtrack for the film. The movie tanked at the box office, but the soundtrack yielded the hit single ‘Late in the Evening.’

In 1981, he reunited with Garfunkel for a free concert in New York’s ‘Central Park.’ The concert album was released in 1982 and was so successful that the duo decided to record another album together. However, while working together, they were reminded of their differences, which led to many years of estrangement.

The album ‘Hearts and Bones’ would have marked their reunion, but eventually became Simon's solo album. The album was not appreciated by the fans and was a commercial flop.

Simon’s career was revitalized with Grammy-nominated studio albums ‘You’re the One’ (2000), ‘Surprise’ (2006), and ‘So Beautiful or So What’ (2011). These albums were also commercial successes.

He has had a long-time association with the popular TV show ‘Saturday Night Live.’So far,he has appeared on the show on 14 occasions.

Simon released his 13th solo studio album‘Stranger to Stranger’ through ‘Concord Records’ in June 2016.His next album ‘In the Blue Light’ was released in September 2018. 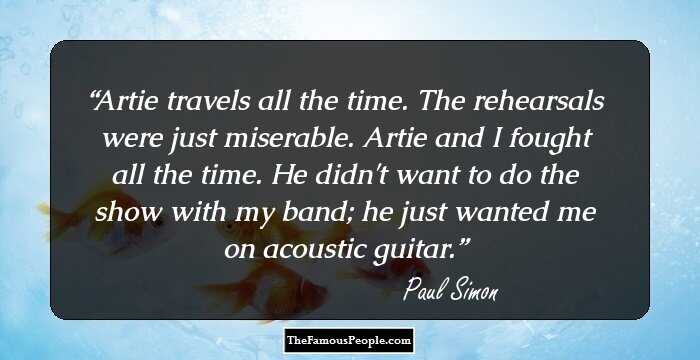 Wednesday Morning, 3 A.M. – This was Simon-Garfunkel’s first LP since their days as the teen harmony duo ‘Tom & Jerry.’ The tracks of the album were composed on high-octane with a touch of pop-folk music. The album released in March 1964 and included tracks like ‘Sun Is Burning,’ ‘You Can Tell the World,’ ‘Bleecker Street,’ etc.

Sounds of Silence –This was the duo’s second album which sounded soothing unlike their first album. Released in 1965, the album included chartbuster tracks like ‘Kathy's Song,’ ‘The Sound of Silence,’ ‘Richard Cory,’ and ‘I Am a Rock.’

Bridge Over Troubled Water – This was one of the biggest-selling albums of the decade (1970). Apart from the gospel-flavored title track, most of the tracks were composed in accordance with the duo’s usual style. The album was released in 1970 and held the number one position for two-and-a-half months from the day of its release. It featured on various charts for years, and sold more than five million copies. Ironically, the album marked the end of one of the most famous musical duos, even after achieving an overwhelming success.

Mrs. Robinson – This track is from the duo's fourth LP ‘Bookends.’ The track was later used in the film ‘The Graduate.’ It holds the record for being the first rock song to win a ‘Grammy.’

Grammy (1968) – Simon & Garfunkel were felicitated with two of this prestigious award for the track ‘Mrs. Robinson.’ They won the award under the ‘Best Contemporary Vocal Duo’ and ‘Record of the Year’ categories.

Grammy (1968) – This ‘Grammy’ was awarded for the film ‘The Graduate’ under the ‘Best Original Scorewritten for Motion Picture’ category.

Grammy (1970) – The duo received five ‘Grammys’ for the LP ‘Bridge Over Troubled Water.’ The awards were won under the ‘Best Contemporary Song,’‘Song of the Year,’‘Record of the Year,’ and ‘Album of the Year’ categories.

Grammy (1975) – Simon was presented with three of the award for the LP ‘Still Crazy After All These Years.’ He won the awards under the ‘Best Pop Vocal Male’ and ‘Album of the Year’ categories.

Grammy (1986) – Simon won two ‘Grammy Awards’ for the LP ‘Graceland.’ He won the awards under ‘Artist’ and‘Album of the Year’ categories.

Grammy Hall of Fame (1998) – Simon was bestowed with the highest honor in the field of music for his contributions. 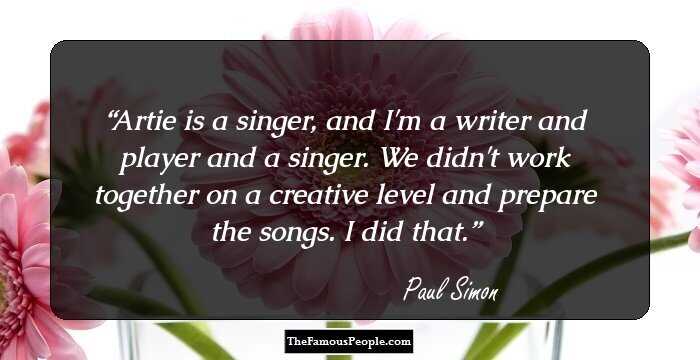 Simon had several failed relationships and has been married thrice. He was in a relationship with Kathy Kathleen Mary whom he met during his days in Europe.

Simon's growing success brought insecurities between the couple and they decided to part ways.

Presently, he is married to singer Edie Brickell. They got married on May 30, 1992 and are parents to three children, namely Adrian, Lulu, and Gabriel.

Simon and his ex-girlfriend Kathy had posed for the cover of ‘The Paul Simon Songbook.’

See the events in life of Paul Simon in Chronological Order