Paul Robeson was one of the most talented and outstanding African-American singers and actors. A multi-talented man, he started his career as an athlete by serving as the football player for the Rutgers University. Simultaneously, he made his international debut in singing and acting in theatre and films. Not limiting his indulgences to just artistic endeavours, he played a quintessential role in political activism and actively advocated against Spanish Civil War, fascism, and social injustice. His radical thought on anti-communalism and anti-imperialism led him to be blacklisted from the country. However, he did not give up on his struggle for equality and continuously voiced out and lashed the supporters of social injustice. He was ripped off his passport which did not allow him to perform outside America but this did not affect him as he continued to publish his thoughts, views and opinion in a periodical, criticizing U. S. policies. It was only later in his life that he secluded from public appearance due to health concerns. Robeson was bestowed with a number of prestigious awards posthumously for his contributions as an actor and activist. Lisa Marie Presley
9th April In History
DID WE MISS SOMEONE?
CLICK HERE AND TELL US
WE'LL MAKE SURE
THEY'RE HERE A.S.A.P
Quick Facts

American Celebrities
Singers
Black Actors
Black Singers
Black Activists
Childhood & Early Life
Paul Robeson was the youngest of the five children born to Reverend William Drew Robeson and Maria Louisa Bustill. His father served as a minister at Princeton's Witherspoon Street Presbyterian Church.
Upon the resignation of his father from the duties of the rector and the death of his mother in a house fire, young Robeson lived a life of poverty and hardship.
Robeson attended Somerville High School, Somerville, New Jersey. Gifted with an athletic bod and being a sports enthusiast, he excelled at various games such as football, basketball, baseball and track. Here, he also performed in Julius Caesar, Othello and sang in the chorus.
He won an academic scholarship to Rutgers University and in 1915, became the third African-American to study at the prestigious university. At the college, he excelled in extra-curricular activities by joining the debate team, the Glee Club and collegiate athletic team. He was recognized for his academic, singing and athletic talent.
In 1919, he graduated from the university with four annual oratorical triumphs and varsity letters in various sports. He served as a class valedictorian. Both athletically and academically, he excelled with top scores/grades.
In 1919, he enrolled at the New York University School of Law. To survive a living, he took up the position of an assistant football coach in Lincoln. However, his stay at NYU was cut short as he moved to Columbia Law School in 1920.
After much coaxing from his girlfriend and future wife, Eslanda Essie Goode, he made his theatrical debut with the role of Simon in Ridgely Torrence's ‘Simon of Cyrene’.
While continuing his law studies, he took up acting projects and starred in various plays such as Mary Hoyt Wiborg's ‘Taboo’ and NFL's ‘Akron Pros’. He also sang in the chorus of an Off-Broadway production, Shuffle Along.
He returned to Columbia to play for NFL's Milwaukee Badgers. With this, he ended his footballing career in 1922. The same year, he graduated from the law school with a degree in legal studies. 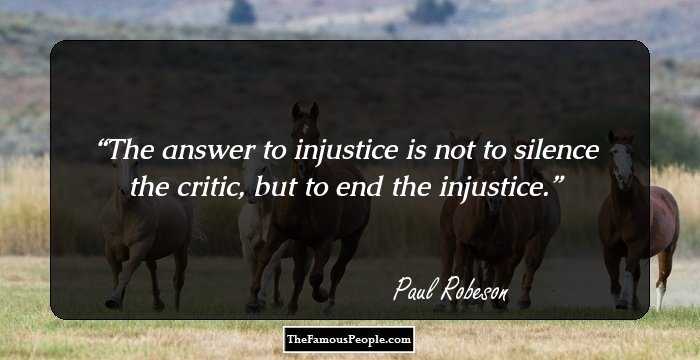 Continue Reading Below
Career
After the completion of his degree, he took up a job in law but gave up the same due to extensive racism prevalent in law firms. He switched to take up acting as his profession.
His early roles include that of Jim in Eugene O'Neill's ‘All God's Chillun Got Wings’ and as Brutus in the revival of ‘The Emperor Jones’. Both the roles received positive critical comments and were very well received.
The early success brought him to instant limelight and fame. The stardom further amplified as his wife quit her job to serve as his agent. She earned him his first movie role in the silent film, ‘Body and Soul’
Other than working as an actor, he sang spirituals in charity concerts. It was due to this performance that he clubbed with Lawrence Brown and Roland Hayes to ad-lib a set of spirituals. His soulful renditions earned him a contract by Victor Records.
In 1928, he returned to acting, playing the role of Joe in the American musical, ‘Show Boat’ at the Theatre Royal. The show lasted 350 performances, thus becoming the most profitable venture
Meanwhile his song, ‘Ol’ Man River’ gained much popularity. His widespread popularity led him to perform for a Royal Command Performance at the Buckingham Palace
In the early 1930s, he appeared with his wife in the experimental classic, ‘Borderline’. He then returned to West End to star in Shakespeare’s Othello, starring opposite Peggy Ashcroft. His portrayal of Othello brought mixed response from the public who appreciated his talent but did not like his lack of style.
In 1932, he revived his character of Joe for the Broadway play, ‘Show Boat’ which was bestowed with immense acclamation and appreciation both critically and popularly.
He then reprised his role of Brutus in the film adaptation of ‘The Emperor Jones’. The film was one-of-its-kind as it was the first time that an African-American starred in the main lead.
Continue Reading Below
In 1934, he enrolled himself at the School of Oriental and African Studies to learn 20 different languages. This multi-lingual yearning was followed by writing an essay titled, ‘I Want to be African’ in which he desired to take up every minute cultural heritage of his ancestry.
Next, he starred in the film, ‘Sanders of the River’ which was released in 1935. The movie had him play the role of Bosambo. Though the movie established his reputation as an international star, it stirred a lot of controversy as well for his character of a colonial African.
Following this, he appeared in a number of films such as ‘Song of Freedom’, ‘Show Boat’, ‘Big Fella’, ‘My Song Goes Forth’, and ‘King Solomon's Mines’. His works granted him a popular status amongst the British actors.
With the beginning of the Spanish War, he turned into a political activist and started using his concert performances to advocate the Republican cause. In 1938, he travelled to Spain to provide a morale boost to Republicans. He then reworked on his career to work for the plights that common man faced
With the outbreak of World War II, he returned to the U. S. to serve as an entertainer. He came up with successful films and radio broadcasts. However, after appearing in ‘Tales in Manhattan’ he de-routed from films for the demeaning roles available to blacks. Instead, he indulged in tours
In 1943, he reprised his role of Othello at the Shubert Theatre and became the first African-American to play the role with a white supporting cast on Broadway. Meanwhile, he became an active civil rights speaker and voiced his opinion against segregation and lynching.
In 1946, he founded the American Crusade Against Lynching organization. He called upon people demanding the Congress to pass civil rights legislation. His anti-colonial activities and black racial class led him to be classified as a threat to American democracy.
After several attempts to persuade him to give up on his activism, his passport was annulled, thereby disallowing him to travel abroad. He indulged in legal battles that took the better part of the next decade.
It was after eight years of struggle that he finally managed to reinstate his passport. Following this, he indulged in travelling yet again and started giving concerts in England and Australia. However, the anguish led him to drug dependency, suicide attempts and nervous breakdown. He was hospitalized in London.
Continue Reading Below
Returning to the United States, he gave up on his concerts and performed negligibly. Slowly, she stepped out of his public life, due to his weak health condition and lessening power as a singer and orator. He spent much of his later life in seclusion. 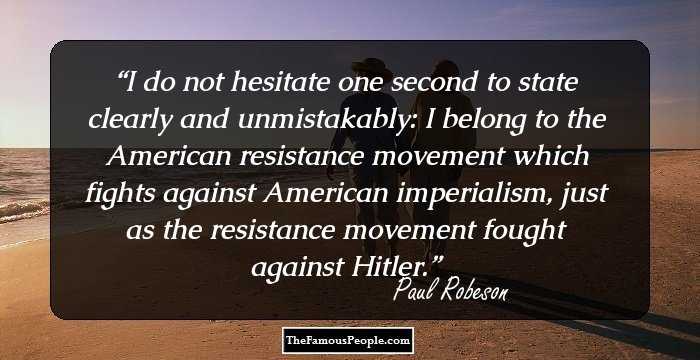 Quotes: I
Awards & Achievements
In 1952, he was conferred with the International Stalin Prize by the USSR.
Posthumously, he received a number of awards such as an Academy Award, Lifetime Achievement Grammy Award, Donaldson Award, Springarn Medal and so on.
He was inducted into the College Football Hall of Fame in 1995
Personal Life & Legacy
He started dating Eslanda Essie Goode in 1920. A year later, the two went into the wedlock. The couple was blessed with their first child Paul Jr.
The marriage went into a troubled phase as he allegedly got involved in extra-marital relationships. It was an affair with Ashcroft that finally made the wedlock hit rock bottom.
The two split up and filed for divorce. However, following an advice by his former football coach, he gave up on his relationship with Ashcroft and reconciled with Essie for good.
Starting 1960, his health dramatically deteriorated as he suffered from heart problems. He suffered from various health complications in the latter half of his life and finally breathed his last following complications of stroke in January 23, 1976.
He was laid in state and a funeral was held at his brother’s parsonage, Mother AME Zion Church. He was interred in the Ferncliff Cemetery in Hartsdale, New York.
Posthumously, several public and private establishments were named after him. His works have been archived at prestigious institutes such as Academy of Arts, Howard University and the Schomburg Center.
The US Postal Service honored him by issuing a 37 cent stamp of him. Furthermore, his movies were released as a DVD boxed set by Criterion Collection, a company that specializes in releasing special edition versions of classic and contemporary films. 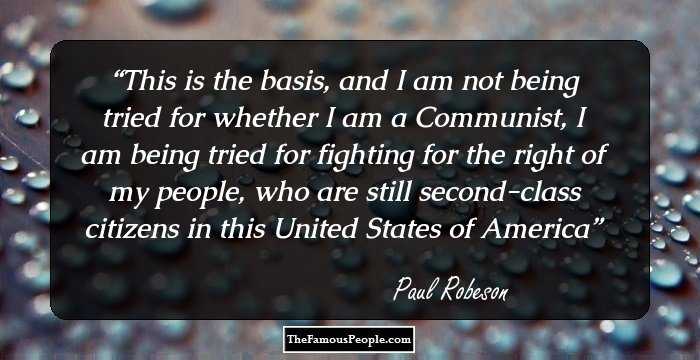 Quotes: I
Trivia
This African-American actor and activist starred in the role of Othello for the Shakespeare play in Broadway. As of 2011, the play became the longest-running production of a Shakespeare play ever staged on Broadway.

See the events in life of Paul Robeson in Chronological Order