Pablo Emilio Escobar Gaviria often referred as the ‘King of coke’ was a notorious Colombian drug lord. He was considered as the most flagrant, influential and wealthiest criminal in the history of cocaine trafficking. The ‘Medellin Cartel’ was formed by him in collaboration with other criminals to ship cocaine to the American market. The 1970s and 1980s saw Pablo Escobar and the ‘Medellin Cartel’ enjoying near monopoly in the cocaine smuggling business in the U.S. shipping over 80% of the total drug smuggled in the country. He earned billions of dollars and by the early 90s his known estimated net worth was $30 billion. The earnings sum up to around $100 billion when money buried in various parts of Colombia are included. In 1989 Forbes mentioned him as the seventh wealthiest person in the world. He led an extravagant life with the fortune he made. His empire included four hundred luxury mansions across the world, private aircrafts and a private zoo that housed various exotic animals. He also had his own army of soldiers and seasoned criminals. While his vast empire was built on murders and crimes, he was known for sponsoring soccer clubs and charity projects. 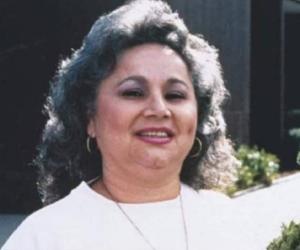 Colombian Celebrities
Drug Lords
Colombian Men
Male Criminals
Colombian Criminals
Childhood & Early Life
Pablo Escobar was born in on December 1, 1949, Rionegro, Colombia, to Abel de Jesús Dari Escobar and Hermilda Gaviria as their third child among seven. His father was a farmer and his mother was an elementary school teacher.
His criminal activities began on the streets of Medellin in his teens when he used to steal gravestones and sell them to smugglers after sanding them. Reberto Escobar, his brother on the contrary claimed that the stones were from owners of those cemeteries where the clients failed to pay for site care and that one of Escobar’s relatives were in the monument business.
He studied in the ‘University Autónoma Latinoamericana of Medellín’ for a short period.
Since childhood he had a strong desire to become a millionaire by the age of 22. His criminal activities along with Oscar Bernal Aguirre included selling fake lottery tickets, stealing cars, selling contraband cigarettes and operating petty street scams.
He became a bodyguard and a thief in early 1970s and kidnapped a Medellin executive to earn a quick $100,000. His next step up in the criminal world was to work with Alvaro Prieto, a contraband smuggler. 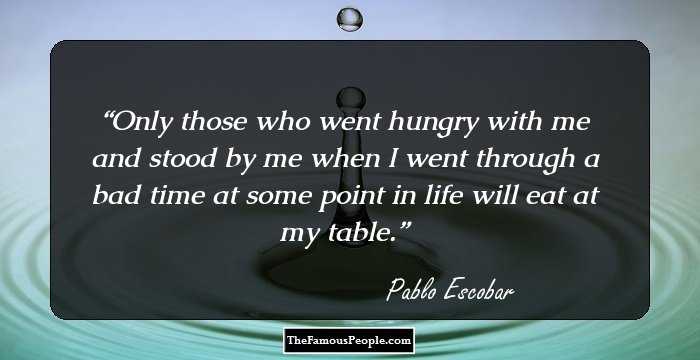 Quotes: Life, Me, Time, Will, I
Continue Reading Below
You May Like

The Most Popular US Veterans
Criminal Career

In ‘The Accountant's Story: Inside the Violent World of the Medellín Cartel’ Roberto Escobar discussed how an obscure and simple middleclass person like Pablo Escobar rose to become one of the richest men under the Sun.

Roberto Escobar used to keep track of all the money earned by Pablo Escobar as his accountant. At its peak when ‘Medellin Cartel’ smuggled 15 tons of cocaine daily to the U.S. worth over half a billion dollars, Pablo and his brother purchased rubber bands worth $1000 per week to wrap the cash bundles. About 10% of the money stored in their warehouses was lost every year due to spoilage by rats.

Pablo Escobar entered the drug trade in the 1970s and developed his cocaine operation in 1975. He himself used to fly a plane between Colombia and Panama for smuggling the drug to the U.S.

In 1975, after he returned to Medellin from Ecuador with a heavy load, he was arrested along with his men. Thirty-nine pounds of white paste was found in their possession. He failed in an attempt to bribe the judges of his case and later killed the two arresting officers resulting in dropping of his case. Soon he started applying his tactics of either bribing or killing to deal with the authorities.

Earlier, he used to smuggle cocaine in old tyres of planes and a pilot would receive $500,000 per flight. Later when its demand in the U.S. escalated, he arranged for additional shipments and alternative routes and networks including California and South Florida.

In collaboration with Carlos Lehder he developed Norman’s Clay in the Bahamas as the new island trans-shipment point. Between 1978 and 1982, this point remained the main route of smuggling for the Medellin Cartel’.

The mid-1980s saw him at the peak of his power smuggling about 11 tons of cocaine per flight to the U.S. According to Roberto Escobar, Pablo Escobar also employed two remote controlled submarines to smuggle cocaine.

In 1982, the ‘Colombian Liberal Party’ elected him to the ‘Chamber of Representatives of Colombia’ as an alternate member. He represented the Colombian government officially at the swearing ceremony of Felipe Gonzalez in Spain.

Another allegation against Escobar was that he backed the left-wing guerrillas of the ‘19th April Movement’ (M-19) who stormed the Colombian Supreme Court in 1985. Many of the judges on the court were murdered and files and papers were destroyed at a time when the court was considering Colombia’s extradition treaty with the United States The treaty would have allowed the country to extradite drug lords to the United States for prosecution.

As his network expanded and gained notoriety, he became infamous worldwide. By that time the ‘Medellin Cartel’ controlled a major portion of drug trafficking covering the United States, Spain, Mexico, Dominic Republic, Venezuela, Puerto Rico and other countries of Europe and America. Rumours that his network reached Asia were also doing the rounds.

His policy to deal with the Colombian system that encompassed intimidation and corruption was referred as ‘plata o plomo’. Though literally it means ‘silver or lead’ in his dictionary, it meant either accept ‘money’ or face ‘bullets’. His criminal activities included killings of hundreds of state officials, civilians and policemen and bribing politicians, judges and government officials.

By 1989 his ‘Medellin Cartel’ was in control of 80% of cocaine market in the world. It was generally believed that he was the chief financier of the Colombian football team ‘Medellín's Atlético Nacional’. He was also credited for developing multi-sports courts, football fields and aiding children’s football team.

Although he was considered an enemy of the Colombian government and the U.S., he was successful in creating goodwill among the poor people. He was instrumental in building schools, churches and hospitals in western Colombia and also donated money for housing projects of the poor. He was quite popular in the local Roman Catholic Church and the locals of Medellin often helped and protected him including hiding him from authorities.

His empire became so powerful that other drug smugglers gave away 20% to 35% of their profit to him for smooth shipment of their cocaine to the U.S.

In 1989, he was accused of getting Luis Carlos Galan, a Colombian presidential candidate, assassinated. He was also accused of the bombings at the ‘DAS Building’ in Bogota and at the Avianca Flight 203.

After the murder of Luis Carlos Galan the Cesar Gavitis led administration acted against him. The government negotiated with him to surrender on condition of a lesser sentence along with favourable treatment during his imprisonment.

In 1991, he surrendered to the Colombian government and was kept in La Catedral that was converted into a private luxurious prison. Before he surrendered the newly approved Colombian Constitution prohibited extradition of Colombian citizens which was suspected to be influenced by Escobar and other drug mafias.

On July, 1992, after finding that Pablo Escobar was operating his criminal activities from La Catedral, the government tried to shift him to a more conventional jail. However, he came to know of such plan through his influence and made a timely escape.

The U.S. ‘Joint Special Operations Command’ and ‘Centra Spike’ jointly started hunting him in 1992. ‘Search Bloc’ a special Colombian task force was trained by them for this purpose.

The ‘Los Pepes’ (Los Perseguidos por Pablo Escobar, "People Persecuted by Pablo Escobar") a vigilante group aided by rivals and former associates of Pablo Escobar executed a bloody carnage. This resulted in killing of around 300 relatives and associates of Escobar and destruction of huge amount of property of his cartel.

There was Co-ordination among ‘Search Bloc’, the Colombian and U.S. intelligence agencies and ‘Los Pepes’ through intelligence sharing so that ‘Los Pepes’ could bring down Escobar and his remaining few allies. 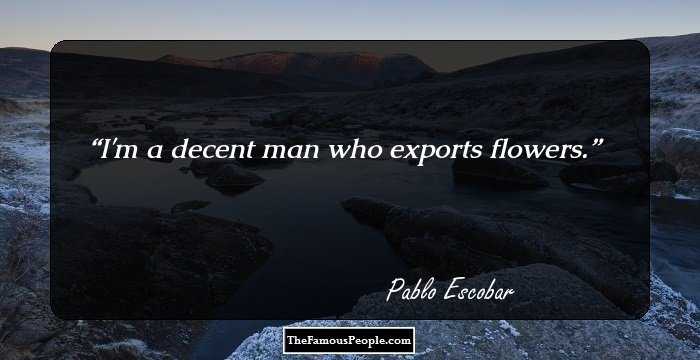 On December 2, 1993, after a fifteen month manhunt by ‘Search Bloc’, the Colombian and the U.S. intelligence agencies and the ‘Los Pepes’, he was found from his hiding and shot by the ‘Colombian National Police’. It still remains a mystery as to who shot him in his head as the relatives of Escobar believe that he shot himself to death.

Around 25,000 people attended his burial including most of the Medellin’s poor who were extensively aided by him. His grave rests at Itagui’s ‘Cemetario Jardins Montesacro’.

During 1990s, the government expropriated his luxurious estate ‘Hacienda Napoles’, the unfinished Greek-style citadel and the zoo under the law ‘extinción de dominio’ and handed them over to the low-income families. The property was reformed to a theme park encompassed by four luxury hotels alongside the zoo and a tropical park. 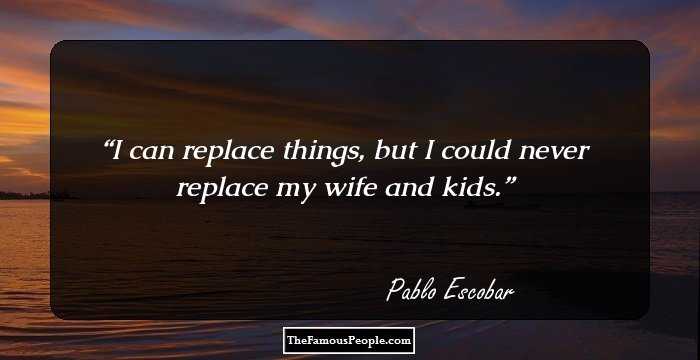 Quotes By Pablo Escobar | Quote Of The Day | Top 100 Quotes

See the events in life of Pablo Escobar in Chronological Order 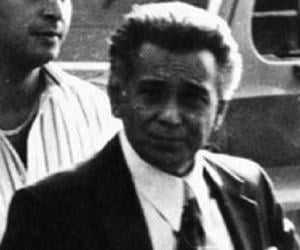