(One of the Most Influential Wrestlers of All Time)
Advanced Search Óscar Gutiérrez, who is popularly known by his ring name, Rey Mysterio (previously Rey Mysterio Jr.), is a well-known American professional wrestler. Known for his popular high flying Lucha Libre style which is his trademark, Mysterio's tenure with WWE started in the year 2002 and lasted till February 2015. Trained by his uncle Rey Misterio Sr., one of the top wrestling stars of the 1970s, he made his debut when he was only fourteen years of age. Despite being only five feet and six inches tall, he didn't stop pursuing his dreams. In his long career, he has won numerous championships such as the 'World Championship Wrestling Cruiserweight Championship', ' World Wrestling Association Lightweight Championship’, and 'World Wrestling Entertainment Championship.’ Mysterio attracted controversy in 2007, when an article was posted by the magazine 'Sports Illustrated', which mentioned several wrestlers including him, who were alleged to have obtained nandrolone and stanozolol. Much later, when it was stated that WWE would suspend him for thirty days, he defended himself saying that the drugs were actually prescribed to him for his knee and arm. Currently, Rey resides in San Diego, California, along with his wife Angelica and their two children. Ronda Rousey
WWE Wrestlers #33
Sportspersons #460
Continue Reading Below
DID WE MISS SOMEONE?
CLICK HERE AND TELL US
WE'LL MAKE SURE
THEY'RE HERE A.S.A.P
Quick Facts

American People
Male Sportspersons
Male Wwe Wrestlers
American WWE Wrestlers
American Sportspersons
Childhood & Early Life
Rey Mysterio was born as Óscar Gutiérrez on 11 December 1974 in Chula Vista, California, in the United States. Much is not known about his parents, but his uncle Rey Misterio Sr., a well-known professional wrestler and trainer, trained him from an early age.
Continue Reading Below
You May Like

The Sexiest Men Of 2020, Ranked
Career
Rey Mysterio made his debut in Mexico in the year 1989, when he was only fourteen. From 1992 to 1995, he wrestled with Asistencia Asesoría y Administración (Assistance, Assessment and Administration), which was based in Mexico.
Later in 1995, he signed with 'Extreme Championship Wrestling'. The next year, he was signed by 'World Championship Wrestling'. In his first match at the Great American Bash, he faced the Cruiserweight Champ Dean Malenko, in which Malenko emerged victorious. Mysterio mostly fought with high flyers such as Ultimate Dragon, Juventud Guerrera, Billy Kidman, and his longtime rival, Psicosis, whom he defeated in July 1996 in 'Bash at the Beach'.
Very soon, again in July 1996, Rey Mysterio fought Malenko, defeating him to win his first Cruiserweight Championship. He reigned as champion for three months. During this time, he had to defend his title from many, such as Ultimate Dragon, Super Caló and then Malenko himself.
Mysterio eventually lost the title after losing to Malenko at the Halloween Havoc. Later, he challenged Ultimate Dragon for the J-Crown Championship in November 1996. However, he was unsuccessful.
In 1997, Rey won the Cruiserweight Championship for a second time, after emerging victorious in a match against his opponent Guerrero. However, in November, he was defeated by Guerrero, and the latter reclaimed the title.
In January 1998, Rey Mysterio won his third Cruiserweight Championship after defeating Juventud in a match. He lost it after nine days to Chris Jericho.
Later that year, he formed a tag team with Billy Kidman to fight at the Latino World Order. Later, Mysterio fought Kidman, for the Cruiserweight Championship, though he was unable to win it back.
In 1999, Mysterio was forced to remove his mask after he and his tag partner Konnan were defeated in a 'Hair vs. Mask match' which he fought against Kevin Nash and Scott Hall. He expressed strong disappointment over being unmasked, and said that he only removed it because he had no other choice.
With a new and a better mask, he made his debut with the WWE (World Wrestling Entertainment) in 2002. After facing various opponents such as Chavo Guerrero, Kurt Angle and Big Show, he later reformed his tag team with Billy Kidman.
Continue Reading Below
Later in 2005, he teamed up with Eddie Guerrero, and together won tag team titles. However, Guerrero was secretly jealous of Rey, as he had never been able to beat him. Therefore, during a match, he turned on him, and after abandoning him, he beat up Rey as well. This “jealousy and feuding” at WrestleMania was part of a storyline to build up audience’s interest.
During this time, due to his frustration, Guerrero also revealed a secret that they had shared regarding Rey's son Dominick—this too was a part of a storyline. Guerrero was actually Dominick's real father whom he had left with Mysterio when Dominick was a baby. They had a ladder match, for his custody, in which Rey turned out victorious. Later, Rey was defeated by Guerrero, after which their feud finally came to an end.
Later, after defeating Randy Orton, Rey Mysterio won the World Heavy Weight Champion in 2006. This was followed by a feud between Mysterio and John "Bradshaw" Layfield as the latter believed that it was he who deserved the World Heavyweight Title.
This resulted in Rey having to face three opponents chosen by Bradshaw. He was defeated but later, in a direct match with Bradshaw, he retained his title.
Later in 2009, Rey Mysterio challenged Bradshaw for his Intercontinental Championship. Rey won the match in just twenty-one seconds, resulting in him being made the 21st Triple Crown Champion in World Wrestling Entertainment history.
In 2011, Mysterio took part in a tournament for the WWE Championship. He advanced to the finals, where he faced The Miz. Rey was victorious, and won his first WWE Championship. However, he lost his title to John Cena later the same day. Later, he fought against Alberto Del Rio, who was the new champion, in order to reclaim his title. However, Mysterio lost.
In 2015, after ending his long tenure with WWE, he was again signed by Asistencia Asesoría y Administración. Currently, he is with Lucha Underground, with whom he had signed in December 2015.
Awards & Achievements
Throughout his career, Rey Mysterio has won various championships. Some of them are the 'Mexican National Welterweight Championship' (won once), WCW Cruiserweight Championship (won five times), WWE World Heavyweight Championship (won twice), WWE Tag Team Championship (won four times), and the WWE Championship (won once).
Personal Life & Legacy
Rey Mysterio and his wife Angie have two children, a son Dominick and a daughter Aalyah. He has got all their names tattooed across his body.
He is devout Roman Catholic, and often crosses himself before matches.
You May Like

See the events in life of Oscar Gutierrez in Chronological Order 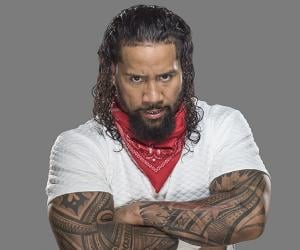