More often than not we have heard of brother’s rivalry and contention. However, turning the pages of history, one such brother duo not only wronged this cliché but contributed to making history in aeronautical engineering! Wright brothers, Wilbur and Orville, were the foremost pioneers, inventors and innovators in the field of aviation who mastered the creation of the world’s first successfully controlled, powered and sustained heavier-than-air human flight in 1903. Since the very beginning of their decade long effort they concentrated on resolving flying problems by developing a reliable method of pilot control. The approach was quite different from other inventors who concentrated on building powerful engines alone. They achieved a breakthrough with the invention of the three-axis control, which enabled the pilot to steer the aircraft effectively and to maintain its equilibrium. Dodging skepticism and criticism, the brothers went on to initiate Wright Company that was involved with selling of flying device. While both the brothers did not have business acumen, Wilbur was blessed with executive skills which Orville missed on. As such, upon the death of the former, Orville sold the company and retired to become an important member of the board of major aeronautical organizations. American Celebrities
American Men
American Aviators
American Inventors & Discoverers
Leo Men
Childhood & Early Life
Orville Wright was one of the seven children born to Milton Wright and Susan Catherine Koener in Dayton, Ohio. While his father belonged to English and Dutch ancestry, his mother had a German and Swiss lineage.
As a child, young Orville was mischievous so much so that he was once expelled from elementary school due to the same.
In 1878, he was first exposed to a flying device. His father brought home a toy helicopter. He along with his brother Wilbur, played with the toy until it broke.
Interestingly, unlike other kids, the two instead of playing with newer toys went on to build a helicopter on their own. This was the first experience that ignited their lifelong interest in flying.
Completing elementary school, he enrolled himself at the high school. However, he dropped out of the same right after his junior year to start a printing business. 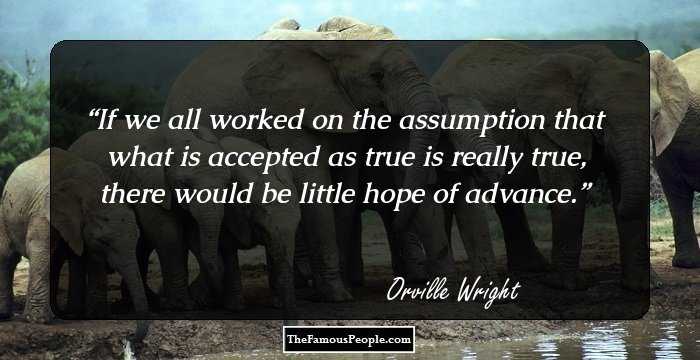 Quotes: Hope
Continue Reading Below
Career
In 1889, along with the help of his brother, he designed and built his own printing press. Wilbur joined his brother as the two began a weekly newspaper, called the West Side News.
While he took on the role of a publisher, his brother served as the chief editor of the paper. Within a year, they converted the paper from being a weekly to a daily newspaper by the name, ‘The Evening Item’. However, the newspaper closed down after about four months.
He then focussed on commercial printing. His main client was Paul Laurence Dunbar, a famous African-American poet and writer and his friend. He even printed the weekly newspaper, Dayton Tattler.
No sooner than 1892 he changed his profession and opened a repair and sales shop instead, looking at the booming bicycle craze. With a little experience, they started manufacturing bicycles to tame their interest of flight.
Meanwhile, he did not let go off his interest in aviation and aeronautics and regularly updated himself with the latest world news in the field. The death of German aviator Otto Lilienthal reaffirmed his interest in aviation.
He very well comprehended and realized that a reliable method of pilot control was the key to a successful and safe flight. Observing the birds gave him an idea that the birds angled their wings to balance and control their body. The same technique needed to be applied to the man-made wings as well
In 1899, the wind warping technique was first put to test. The following year, he along with his brother moved to Kitty Hawk, North Carolina, to begin their manned experiments.
Using the research of other aeronautical scientists and aviation pioneers, they began devising the basic design of their flying device, excepting for the wings, for which they employed camber, a curvature of the top surface
In the early days of the experiment, they tested wing-warping using control ropes from the ground. However, though the glider worked well with no accident, it did not go to much height and thus wing-warping could not be tested.
Continue Reading Below
In 1902, they bettered their flying device by incorporating major changes based on the recent discoveries. They not only narrowed and lengthened the wings, but made airfoil flatter. The same year, in October, the brothers achieved a major breakthrough by achieving true control in turns for the first time. This encouraged them to build a powered flying machine.
The first ever free, controlled flight of a power driven airplane took charge of the air in December 1903. Of the four flights they made that day, the longest was 59 seconds, and reached a height of 852 feet.
Though a great feat had been achieved, the invention did not make much into the headlines as it was met with scepticism. It was the cold reaction that propelled the brothers to take their invention forward.
While Wilbur moved to Europe, Orville went to Washington DC to demonstrate to the government about the flying machine and sell the same. Though the US Military were uninterested in the flying device, the government in France showed an interest.
Meeting Frank P Lahm turned the fate of the brothers as well as the US Aeronautical Division who became interested in the device but demanded it to have a passenger seat.
Fulfilling the new demand, they revamped the plane to come up with a renewed version that carried a passenger seat. The plane was sold to the US military for $30, 000.
The extraordinary achievement guaranteed the brothers fame and recognition. It also brought them a huge demand for the flying device from both Europe and US. They initiated a company in 1909 by the name Wright Company.
While Wilbur took over as the company President, the younger brother served as the vice president. Headquartered in New York, the company owned a factory in Dayton and a flying school at Huffman Praire. The business witnessed a major boom and was propelling upwards.
May 25, 1910 marked a historic day when the brothers flew together. The same day, Orville flew his father Milton in the latter’s first and only flight experience.
Continue Reading Below
Upon the death of Wilbur, Orville took over the presidency of Wright Company. However, he sold the company in 1915 due to his lack of interest in the business part of the company.
His last flight as a pilot was on board the 1911 Model B in 1918.
He spent much of the later part of his life on boards and committees related to aeronautics, including the National Advisory Committee for Aeronautics, predecessor to the National Aeronautics and Space Administration. He served at the NACA for 28 years. 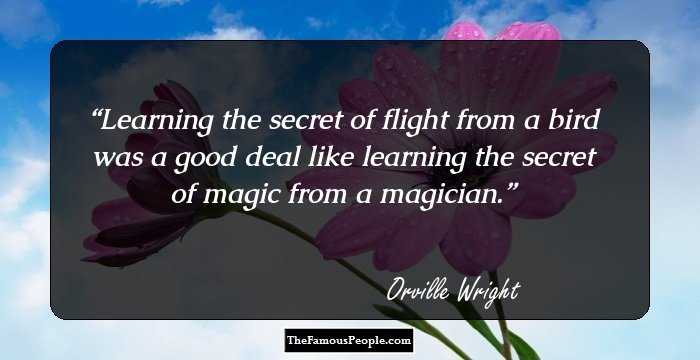 Quotes: Like, Learning
Awards & Achievements
In 1930, he received the inaugural Daniel Guggenheim Medal established in 1928 by the Daniel Guggenheim Fund for the Promotion of Aeronautics.
In 1936, he was elected a member of the National Academy of Sciences.
Personal Life & Legacy
Neither he nor did his brother ever marry. Furthermore, he was furious when his sister Katherine married in 1926 and cut off the communication from her. In 1929, he had to be persuaded to visit Katherine on her deathbed.
He breathed his last on January 30, 1948 – he died of a heart attack. He was buried at the Wright family plot in Dayton, Ohio.
Both the US states of Ohio and North Carolina take credit for having been the place for Wright brother invention. While former was the birthplace for building the design for the flying machine, the latter served as the site where the first flight flew.
The site is today preserved under the name Wright Brothers National Memorial whereas Ohio has Dayton Aviation Heritage National Historical Park. 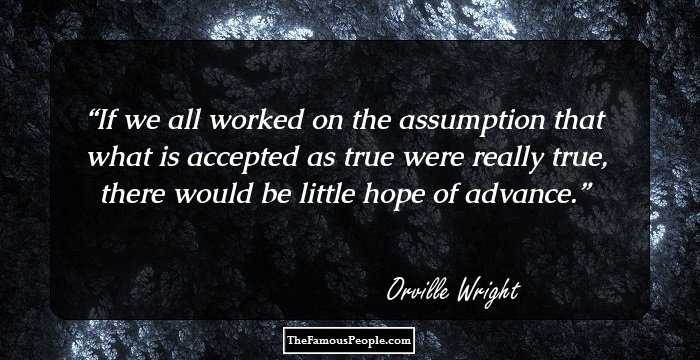 Quotes: Hope
Trivia
Together with his brother, he is known as the father of modern aviation for successfully flying the first free, controlled flight of a power-driven airplane.
Recommended Lists:
Inventors & Discoverers #2

See the events in life of Orville Wright in Chronological Order