Advanced Search
Nicole Elizabeth Polizzi, alias Snooki, is a distinguished personality in the entertainment world. She gained immense popularity after her appearance on the runaway reality show ‘Jersey Shore’ which made her a household name and a superstar in the entertainment world. She has created a niche for herself through her short height, curvy figure, and bronze brunette hair. Even though she was born in a different continent and adopted by American parents, it didn’t stop herself from adjusting in the environment and making her parents proud by earning celebrity recognition in the United States as well as across the world. Her late-night talk shows and her high-end fashion style have created a rage in the glam world. Apart from being a known face in reality TV shows, she also landed herself into controversies and legal troubles for various reasons, thanks to her wild and wayward behavior. She has hosted quiet a number of award programs and made appearances in some of them as well. In addition to performing on television, she has also participated in dance competitions and authored a number of books. What’s more, she has even introduced her own line of brands selling a large variety of merchandise. American People
American Women
Short Celebrities
Short Female Celebrities
Women Media Personalities
Childhood & Early Life
Nicole Elizabeth Polizzi was born on November 23, 1987 in Santiago, Chile. However, she was adopted and raised by Italian-American parents, when she was six months old.
She was brought up in Marlboro, New York, and completed schooling from Marlboro High School. Thereafter, she graduated from community college and became a veterinary technician. 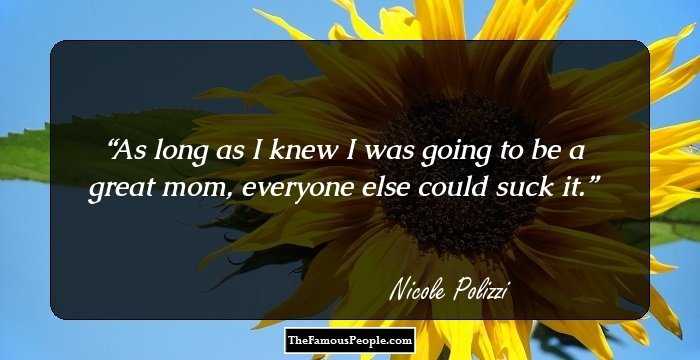 Quotes: I
Continue Reading Below
Career
She debuted on television with the MTV show ‘Is She Really Going Out With Him?’ that dealt with women in relationship with loathsome and nasty men.
She has made appearances on several TV programs award functions, like TLC’s Cake Boss episode ‘Snookie, Super Anthony & a Ship’, MTV Europe Music Awards held in Madrid, Spain (2010), and MTV Video Music Awards (2010).
In 2011, she appeared as a guest hostess on WWE Monday Night Raw where she clashed with LayCool. As a result, she fought and won a Mixed Tag Team match at WrestleMania 27, along with partners Trish Stratus and John Morrison.
She participated in the 17th season of ‘Dancing With the Stars’, with newcomer Sasha Farber as her partner, in 2013. The couple was eliminated in the seventh week.
In 2010, she was arrested and charged with disorderly conduct and peace disturbance in the neighborhood of Seaside Heights, New Jersey, for which she was fined $500 and community service as penalty.
She was arrested for a brief period in 2011 in Florence, Italy, for colliding her car with a parked traffic police car. Although two officers were injured slightly, she was released later on.
She has hosted a number of award and TV shows, some being CMT Music Awards (2010) and MTV’s Club New Year’s Eve 2013, along with Jwoww and Jeff Dye, in 2012 to welcome the New Year.
She is one of the highest earning reality show celebrities, making about $150,000 per episode for the fifth season of ‘Jersey Shore’, which increased from $30,000 and $5000 in the second and first seasons, respectively.
She has been a part of numerous talk shows, which include ‘Jimmy Kimmel Live!’, ‘The View’, ‘The Wendy Williams Show’, ‘The Ellen DeGeneres Show’, and ‘Late Show with David Letterman’.
Continue Reading Below
She has authored a handful of books, namely, ‘A Shore Thing’ (2011), ‘Confessions of a Guidette’ (2011), ‘Gorilla Beach’ (2012) and ‘Baby Bumps’.
She launched her own brand line, including ‘Snooki by Nicole Polizzi’, ‘Snooki Couture’, and ‘SnookiLove’, which sells a wide range of fragrances, handbags, slippers, fashion accessories, beauty products, sunglasses, lotions, and others.
Major Works
She was spotted by casting director Josh Allouche for the MTV reality TV show ‘Jersey Shore’ in 2009, which made her a runaway star overnight. It became the channel’s highest-rated show, with her starring in all six seasons.
In 2012, she appeared in a spin-off show ‘Snooki & Jwoww’, alongside Jennifer Farley, which highlighted their close friendship, their relationship with their partners and their babies.
Her novel ‘A Shore Thing’ became a New York Times best-seller, with over 9,000 copies sold in its first month of release.
Awards & Achievements
She was nominated in the ‘Choice TV: Female Reality/Variety Star’ category at Teen Choice Awards in 2010 and 2011.
She was honored with the WWE 2011 A-Lister of the Year Slammy Award, held in December 2011. She accepted it via satellite due to her absence.
Personal Life & Legacy
She got into a relationship with Jionni LaValle in October 2010. The two got officially engaged in March 2012.
The couple has two children out of wedlock – son, Lorenzo Dominic LaValle, born in August 2012 and daughter, Giovanna Marie LaValle, born in September 2014.
She married her longtime fiancé in a traditional Catholic ceremony on November 29, 2014 at St. Rose of Lima Church in East Hanover, New Jersey. The couple, later, held a reception at The Venetian banquet hall in Garfield.
Trivia
She was nicknamed ‘Snooki’ by her school friends, inspired by the ‘cootchie crook’ character of the same name from the movie ‘Save the Last Dance’ (2001), upon being the first among her friend circle to date a boy.
Despite being an active student and a cheerleader at school, she suffered from and fought an eating disorder.

See the events in life of Nicole Polizzi in Chronological Order