Nathan Blair is an American actor best known for his performance in the 2020 action-comedy film We Can Be Heroes in which he appeared alongside actors like Christian Slater. He is also known for playing important roles in TV series like Best. Worst. Weekend. Ever. Apart from being an actor, Nathan Blair is also a social media influencer. He has his own YouTube channel where he posts interesting videos pertaining to his experiences as an actor. A multi-talented personality, Nathan Blair writes and directs his videos, for which he is much-respected among fellow social media stars. Nathan Blair started his career in 2016 when he was cast to play important roles in several short films. Some of the short films in which he appeared in 2016 include ‘The Wishing Zone’ and ‘The Speed Friend-Finding Service (For the Socially Awkward).’ In 2018, he appeared in eight other short films, namely ‘The Tenors,’ ‘Room 142,’ ‘The Interns,’ ‘Turf War,’ ‘Bored Games,’ ‘Channel Surfing,’ ‘Ripple Effect,’ and ‘Goober the Gopher.’ In 2018, he also made his TV debut when he was chosen to play a 10-year-old boy in a TV series titled ‘Legion.’ Created by Noah Hawley, the series follows a troubled young man named ‘David Haller’ who is diagnosed as schizophrenic. In the same year, he also appeared as ‘Young Zed’ in a comedy TV mini-series titled ‘Best. Worst. Weekend. Ever.’

In 2019, Nathan Blair was cast in a TV series titled ‘Raven's Home’ in which he appeared as a ‘Sixth Grader’ in an episode titled ‘Diss Track.’ His big breakthrough came in 2020 when he appeared as ‘Wild Card’ in the popular action comedy-drama film ‘We Can Be Heroes.’ Directed by Robert Rodriguez, the film follows a group of kids who work together to save the planet and their parents from alien invaders. Apart from being an actor, Nathan Blair is also a social media influencer who has thousands of followers on social media platforms, such as Instagram and YouTube.

Nathan Blair’s popularity increased after appearing in We Can Be Heroes in which he shared screen space with actors like Priyanka Chopra Jonas, YaYa Gosselin, and Christian Slater. His popularity as an actor earned him followers and subscribers on his social media accounts. His self-titled YouTube channel, which was created on November 26, 2015, has managed to gather more than four million views and over 85k subscribers. His YouTube channel features celebrities like Robert Rodriguez and Priyanka Chopra Jonas. Nathan Blair also has a popular Instagram account which has accumulated more than 435k followers.

Nathan Blair was born on December 6, 2005, in the United States of America where he was brought up alongside his two sisters. He is of mixed origin since his mother is French Canadian. He was asked by his mother to attend a French school until fifth grade, as a result of which he speaks French. A multi-talented person, Nathan Blair loves playing the guitar apart from spending time on film sets. He also loves drawing and has shared some of his creations on his Instagram page. He is also an animal lover and owns several pets, including a bearded dragon, fish, cats, and birds.

See the events in life of Nathan Blair in Chronological Order 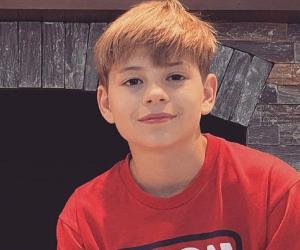