Naomi Watts is a British born actress who grew up in Australia and then went on to become one of the most important stars in Hollywood following outstanding performances across a range of roles in different films. However, her career took some time to really take off but when it did there was no looking back as she went from one successful project to another that brought popularity and accolades in equal measure. Watts started off as a model but her modelling career never really took off and that is when she decided to venture into Australian soaps before auditioning for movie roles. Naomi Watts is also one of the few actors in Hollywood who is an exponent of the Meisner’s Technique of acting even though most of the major actors of Hollywood are exponents of Method Acting. Her ability to impose herself on roles and situations over a career that has seen a fair share of disparate roles is the reason why she is regarded as one of the most versatile actors that Hollywood has ever had. Naomi Watts had nursed ambitions of becoming an actor as a child when she saw her mother act in a play and she has achieved what she set out to do. British People
British Women
Libra Actresses
British Actresses
Actresses Who Are In Their 50s
Childhood & Early Life
Naomi Watts was born to Peter Watts and Myfanwy Edwards in Tonbridge in Kent, United Kingdom on 28 September 1968. Her mother was a dealer in antiques while she was also engaged in set and costume designing. Watts’ father was a sound engineer who worked with the famous rock band Pink Floyd.
Watts’ parents divorced in 1972 and she went to live with her mother. During this time, the family of three, including her brother Ben Watts moved around a lot and lived in Wales for some time. Watts initially studied at a school where the medium of instruction was Welsh.
Following her mother’s second marriage in 1978, Watts moved to England and the family lived in Suffolk. She studied at the Thomas Mills High School and that was when she started to harbour ambitions of becoming an actress.
In 1984, Naomi Watts moved with her family to Sydney, Australia and she studied at the Mosman High School before moving on to the North Sydney Girls High School. Watts did not complete her schooling and instead took up different jobs, however her primary goal was to get into modelling. 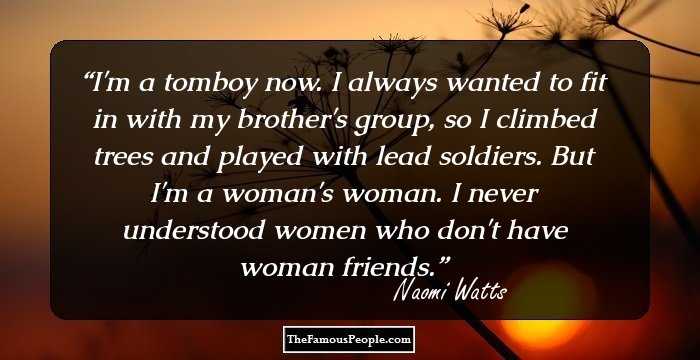 Continue Reading Below
Career
In 1986, at the age of 18, Naomi Watts signed up with an agency that represented models and even though the agency sent her to as far flung places as Japan, the whole thing turned out to be a failure. However, the same year she managed to land a role in her first film titled ‘For Love Alone’.
Following her film debut, Watts was primarily involved with television in Australia and starred in the series ‘Hey Dad’. However, in 1991, she made a comeback into films when the director of the then upcoming film ‘Flirting’ cast her in the film. The film starred Nicole Kidman as well. In next two years, she would go on to act in ‘The Custodian’, ‘Matinee’ and ‘Wild Sargasso Sea’; all Australian films.
In 1993, Watts moved to Los Angeles permanently and two years later her first film in Hollywood ‘Tank Girl’ was released. A film that might have launched her but did not receive the greatest reviews. For the next three years she acted in films like ‘Person’s Unknown’, ‘Timepiece’ and ‘Children of the Corn IV: The Gathering’.
Naomi Watts’ initially found it hard to make a mark in Hollywood but it all changed when David Lynch decided to cast her in the lead role for his film ‘Mulholland Drive’. The movie was released in 2001 and Watts received critical appreciation for her double role in the film. The same year she also featured in the film ‘The Shaft’.
In 2002, Naomi Watts starred in the blockbuster ‘The Ring’ alongside Martin Henderson. The film wasn’t only the highest grossing film of that year but also received critical appreciation. Later on that year, she featured in the ensemble cast of the British comedy film ‘Plots with a View’ and ‘The Outsider’.
The movie ’21 Grams’ which was released in 2003 really catapulted Naomi Watts to the top table of Hollywood as the film was not only a blockbuster but it also earned her an Academy Award nomination for Best Actress. Over the next few years she starred in films like ‘The Assassination of Richard Nixon’, ‘King Kong’, ‘Eastern Promises’, ‘Painted Veil’ and ‘Funny Games’.
Having taken a break after becoming a mother, Watts returned to the screen in 2009 with the film ‘The International’ in which she played the role of an Interpol agent. Her film ‘Mother and Child’ was released in the same year and the movie was extremely well received by critics. It was shown at the Sundance Film Festival as well. Two years later she starred in the J. Edgar Hoover biopic titled ‘J. Edgar’.
In 2012, Naomi Watts played the lead role in ‘The Impossible’ that was based on the challenged faced by a British doctor during the Tsunami of 2004 and that role earned her an Academy Award nomination for Best Actress. Two years later, Watts portrayed the charismatic Princess Diana in the biopic ‘Diana’.
In 2014, she starred in the critically acclaimed and Academy nominated film ‘Birdman’ and her role as a stage actress was widely appreciated. 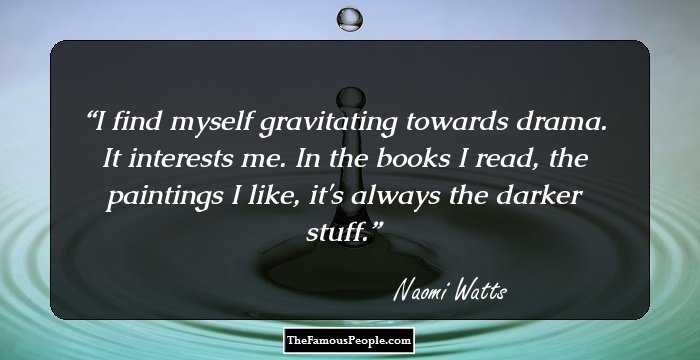 Major Works
In a career that has stretched over decades Naomi Watts has done some stellar work however as far as her most important work is concerned, it is hard to look past her role in ‘The Impossible’. It earned her an Academy Award nomination for Best Actress.
Awards & Achievements: -
Naomi Watts hasn’t won any of the major awards in the world of cinema but she has been nominated twice for the Academy Award for Best Actress and that is no mean achievement. 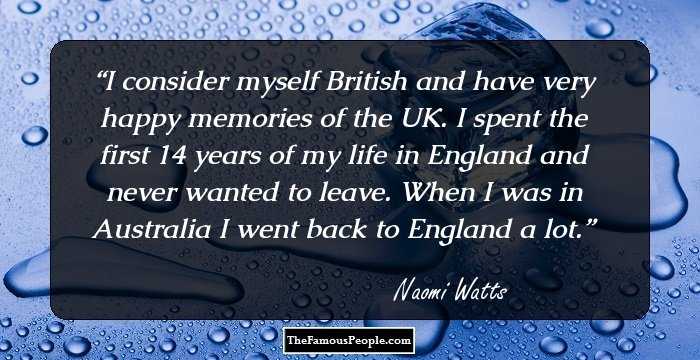 Quotes By Naomi Watts | Quote Of The Day | Top 100 Quotes

See the events in life of Naomi Watts in Chronological Order