Michael Gregory Mizanin, or as he is better known, The Miz, is a WWE Superstar, actor, and reality TV personality. He is the current holder of the ‘WWE Intercontinental Championship’, and in past has held the ‘WWE Championship’, the ‘WWE Tag Team Championship’, the ‘WWE United States Championship’ and more. Since childhood, he has been an ardent fan of professional wrestling and after a successful run in various MTV reality shows, he joined the ‘Ultimate Pro Wrestling’ (UPW) company to train at the ‘Ultimate University’. He competed in the fourth season of ‘Tough Enough’, and made it to the final round. After doing another round in the development circuit, Mizanin debuted as a ‘Smackdown!’ host in 2006. A few months later, he made his in-ring debut against Tatanka, winning the match. Over the ensuing years, he has cemented his status as one of the greatest heels of his generation. Resilient, charismatic, and known for his longevity in a business where a lot of talented individuals are lost to injuries, The Miz is a deft professional. He currently utilises two finishing moves, one submission, ‘Figure-Four Leglock’ and a takedown, ‘Skull-Crushing Finale’. His present entrance theme is ‘I Came to Play’ by Downstait.
Continue Reading Below American People
WWE Wrestlers
American Men
Miami University
Tall Celebrities
Childhood & Early Life
Michael Gregory Mizanin was born on October 8, 1980, in Parma, a city in Cuyahoga County, Ohio, United States, to parents George Mizanin and Barbara Pappas. Growing up, he was an athletic child, playing baseball, basketball, and practising karate, in which he even received a black belt.
He attended ‘Normandy High School’, Ohio, before enrolling at the ‘Miami University’. His parents divorced when he was 11. His mother remarried and through her, he has a step-brother, Jimmy, and a step-sister, Tonia.
His first job was as a cook at his father’s ‘Mr. Hero’ sandwich shop, where he worked for six years before going to college. 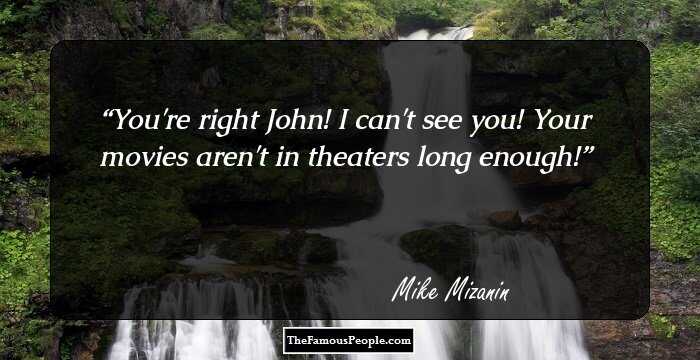 Famous Beautiful Women With Green Eyes
Career
Mike Mizanin left college and the pursuit of a business degree when the opportunity to be on the 10th season of MTV’s ‘The Real World’ presented itself in 2001. He created the character ‘The Miz’, a brash, arrogant version of himself to cope with the aggressive, unforgiving environment of reality television. He subsequently starred in its spin-off series, ‘Real World/Road Rules Challenge’ and won the fifth season’s challenge, ‘Battle of the Seasons’.
In 2004, Mizanin took part in the WWE’s competition show ‘Tough Enough’. Though he ended up as the runner-up of the season, losing to mixed martial artist Daniel Puder, WWE’s interest in him was evident, and the competition served as a springboard for his career.
He was offered a developmental contract by the WWE sometime in 2005 and was sent to ‘Deep South Wrestling’ (DSW) and after that, to ‘Ohio Valley Wrestling’ (OVW) to hone his skills. He wrestled for the promotions and appeared in WWE dark matches before getting a call to be a host on ‘Smackdown!’.
Miz’s debut as a host came about on June 2 episode of ‘Smackdown!’ in 2006. He hosted the annual ‘Diva Search Competition’, and appeared on both ‘Raw’ and ‘Smackdown!’
After the show concluded, he exclusively returned to ‘Smackdown!’ and began to wrestle, defeating Matt Hardy, Funaki, and Scotty 2 Hotty and building up an unbeaten streak. He suffered his first loss in WWE against Boogeyman at the December ‘Armageddon’ event.
On May 25, 2006, WWE came out with the announcement of the launch of a new third brand, ‘Extreme Championship Wrestling’ (ECW), a throwback to the 1990s promotion. During the 2007 ‘Supplemental Draft’, the brand picked Miz as their second choice.
Miz won his first title in WWE on the November 16, 2007 episode of ‘Smackdown!’ when he and his partner John Morrison won the ‘WWE Tag Team Championship’, defeating the team of Matt Hardy and Montel Vontavious Porter (MVP). They started ‘The Dirt Sheet’, a streaming segment on the WWE website and wrote the content of each episode together. Their partnership ended in 2009 after two different title runs.
Miz, now appearing on ‘Raw’, started a feud with John Cena in April 2009 that lasted through several pay-per-views. He became the ‘WWE United States Champion’ on October 5 after defeating Kofi Kingston.
In 2010, he teamed up with Big Show to win the ‘United WWE Tag Team Championship’. They lost the title to the ‘Hart Dynasty’ on the April 26 episode of ‘Raw’ when Miz lost out to a sharpshooter.
Continue Reading Below
In a storyline, Miz mentored NXT participants Daniel Bryan and Alex Riley in the 2010-11 time period, both of whom eventually feuded with Miz later on.
His victory in the 2010 rendition of the ‘Money in the Bank Ladder Match’ cleared his path for a title shot. He finally cashed in the contract on November 22, pinning Randy Orton to win the ‘WWE Championship’.
The Miz participated in Wrestlemania 27 on 3 April 2011, where, despite suffering a concussion during the match, he finished and won against Cena, successfully defending his ‘WWE Championship’ title. His reign lasted until May 1, 2011, when in a triple threat steel cage match, Miz was defeated by Cena.
He won his first ‘Intercontinental Championship’ on July 23, 2012, against Christian at the 1000th episode of ‘Raw’. He turned face for the first time in his career on 18 November.
In June 2014, Miz, once again a heel, introduced the gimmick of a Hollywood movie star. Damien Sandow, billed as Damien Mizdow, portrayed his stunt double. The gimmick provided the much-needed direction to his career which was becoming regressively stale.
His real-life wife, Maryse, has been part of the WWE roster for quite some time. She made her return on April 4, 2016, and helped her husband win the IC title for the fifth time. They started to cut various promos on the ‘Miz TV’ segments, turning their characters into the on-screen power couple of WWE.
He and his wife were drafted to ‘Smackdown!’ after the 2016 brand split. He and the current general manager of the brand had a spat that began on the August 23 episode of ‘Talking Smack’. Miz cut a promo so convincingly that many questioned whether it was scripted or not.
He was drafted back to ‘Raw’ on April 10, 2017. He began his seventh reign as the WWE IC champion on June 4, 2017, following the pay-per-view event ‘Extreme Rules,’ where he defeated Dean Ambrose.
He starred in the third, fourth, and fifth films in the ‘WWE Studio’s ‘The Marine’ series. He has also guest-starred in shows such as ‘Psych,’ ‘Sirens’, and ‘Supernatural’. 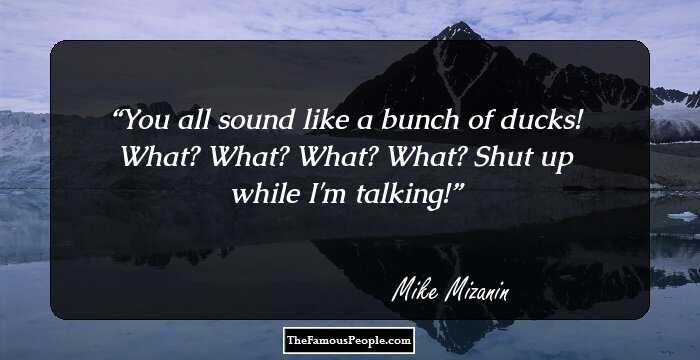 Awards & Achievements
The Miz won two ‘Slammy Awards’ in 2008. He and John Morrison were the winners of the ‘Tag Team of the Year’ award and ‘Best WWE.com Exclusive’ award.
He was named by ‘Wrestling Observer Newsletter’ as the “most improved wrestler” in 2008 and 2009.
Personal Life
The Miz met Maryse Ouellet (ring name Maryse) in 2006 on the set of ‘WWE Diva Search’. They started dating a year later. In 2013, he proposed to her in the same room they originally met. They got married in the Bahamas on February 20, 2014.
The couple has been associated with ‘N0H8 Campaign’, a charitable organisation that promotes LBGT marriage, gender, and human equality. 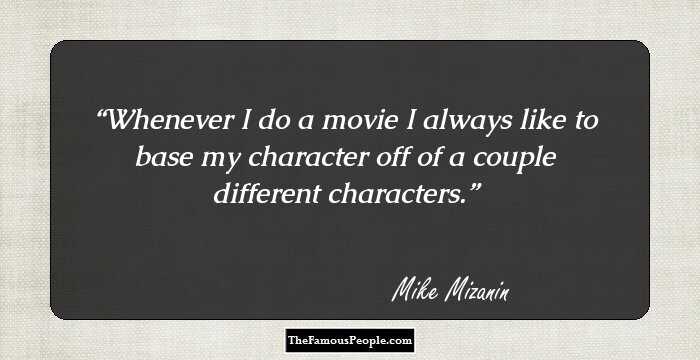 Quotes: Character
Trivia
Mizanin joined ‘Theta Chi’ fraternity in college.
He was trained by Al Snow and Bill Demott during his developmental years.

Quotes By Mike Mizanin | Quote Of The Day | Top 100 Quotes

See the events in life of Mike Mizanin in Chronological Order