Advanced Search
Michele Hicks is an American actress and former fashion model. She is best known for appearing in popular television series, such as ‘Law & Order: Criminal Intent,’ ‘CSI: NY,’ ‘The Shield,’ and ‘Law & Order: Special Victims Unit.’ She was a successful fashion model in New York and Europe before she quit her modeling career to become an actress. She made her acting debut in 1999 when she was cast to play Penny in Michael Polish-directed independent film ‘Twin Falls Idaho.’ She got her big breakthrough in 2004 when she landed the recurring role of Mara Sewell Vendrell in the crime drama television series ‘The Shield.’ Apart from acting, she currently works with an organization called ‘Treatment Advocacy Group’ which aims at helping those with mentally ill family members. Meghan Markle
4th June In History
DID WE MISS SOMEONE?
CLICK HERE AND TELL US
WE'LL MAKE SURE
THEY'RE HERE A.S.A.P
Quick Facts

American People
American Women
New Jersey Actresses
Gemini Models
Female Models
Childhood & Early Life
Michele Hicks was born on June 4, 1973, in Essex County, New Jersey, USA. She grew up in northern New Jersey before moving to New York City at the age of 14. She started working as a door girl after moving to New York City and then landed the job of a bartender at iconic nightclubs, such as ‘Danceteria’ and ‘The Limelight.’
While working at nightclubs, Hicks came across people working in the fashion industry. When she was told that she could try her luck in the fashion industry, she started submitting her photographs to fashion agencies. Eventually, her photographs caught the attention of famous fashion photographer Steven Meisel.
She started working with Meisel in the mid-1990s. In 1997, she landed an opportunity to pose for ‘Italian Vogue’ alongside popular models like Naomi Campbell, Amber Valetta, Kristen McMenamy, Carolyn Murphy, Vincent Gallo, and Kylie Bax. Hicks went on to become a successful fashion model before she decided to become an actress.
Continue Reading Below
Acting Career
Michele Hicks quit her modeling career to focus on her acting career. She made her acting debut in 1999 when she played Penny in an independent film titled ‘Twin Falls Idaho.’ She then played Nicki in the 1999 David Lynch-directed TV movie ‘Mulholland Dr.’
In 2000, she played April in Marc Forster-directed drama film ‘Everything Put Together.’ In the same year, she also played Samantha in a romantic comedy film titled ‘Ropewalk.’ In 2001, she was cast to play Gia DeLuca in an episode titled ‘One’ in the popular police procedural television drama series ‘Law & Order: Criminal Intent.’
In 2002, she was cast to play Kyra Bennett in Fiona Mackenzie-directed thriller film ‘Deadly Little Secrets.’ In 2003, she played Mrs. Hope in a drama fantasy film titled ‘Northfork.’ In the same year, she also played Kimmie in the crime drama TV series ‘Law & Order: Special Victims Unit.’
She landed the lead role of Emma Hauser in Blue Kraning-directed 2003 drama film ‘Distress.’ In 2003, she was also seen in a short film titled ‘New York Stories.’ The following year, she landed roles in several projects, such as ‘Messengers,’ ‘Slogan,’ ‘CSI: NY,’ and ‘Cold Case.’
Michele Hicks landed her breakthrough role in 2004 when she was cast to play Mara Sewell Vendrell in the popular crime drama television series ‘The Shield.’ She played the role from 2004 to 2008, appearing in 26 episodes. In 2006, she became part of the main cast of ‘NBC’ television network’s crime-drama series ‘Heist’ where she played Amy Sykes in six episodes.
In 2007, she was cast to play American film director, producer, and screenwriter Penelope Spheeris in Rodger Grossman-directed biographical film ‘What We Do Is Secret.’ The film was premiered at ‘Los Angeles Film Festival’ on June 23, 2007 and received mixed reviews from critics.
In 2009, she played Nina Fiske in an episode titled ‘3 Women’ in ‘NBC’ network's crime drama television series ‘Life.’ The following year, she was seen in one of the episodes of the popular television series ‘The Mentalist.’ In 2011, she was cast to play Sharon in Rick Bieber-directed sci-fi horror film ‘Rehab.’
Hicks took a break from acting for a couple of years before making a comeback in 2013 when she played Elise in Jay Alaimo-directed comedy-drama film ‘Chlorine.’ The movie was premiered at ‘Sun Valley Film Festival’ on March 17, 2013. The following year, she played Rachel in Stanley Yung-directed mystery-thriller film ‘2 Bedroom 1 Bath.’
In 2015, she landed the recurring role of Sharon Knowles in the long-running drama thriller television series ‘Mr. Robot.’ In the same year, she was cast to play another recurring role in ‘TNT’ network's police drama series ‘Public Morals.’ In 2015, she also played prominent roles in films, such as ‘Guns for Hire’ and ‘The Wicked Within.’ Hicks produced ‘Guns for Hire’ and worked as an associate producer on the sets of ‘The Wicked Within.’
She played Thea Moser in a 2017 episode titled ‘The Ballad of Lady Frances’ in ‘CBS’ network's long-running procedural drama series ‘Elementary.’ The following year, she played Michelle Goldstein in a couple of episodes of the famous comedy-drama web television series ‘Orange Is the New Black.’ In 2018, she was also cast to play Kathryn Haskins in a short film titled ‘Radio Killer.’
Michele Hicks is also an entrepreneur as she owns a pilates gym called ‘re:AB.’ The gym was started along with one of her friends in 1997. She also works closely with an organization called ‘Treatment Advocacy Group’ which provides support to those with mentally ill family members.
Family & Personal Life
Michele Hicks started dating English actor Jonny Lee Miller in 2006 and got married to him in July 2008 in Malibu. Miller was previously married to actress Angelina Jolie from 1996 to 2000. Hicks and Miller were blessed with a son named Buster Timothy Miller on December 3, 2008.
Hicks strive towards improving mental health services in the US. In May 2015, she joined hands with Congressman Tim Murphy to make a plea in Washington, D.C. During her free time, she works out in the gym and goes hiking in places like the Grand Canyon, Africa, and Alaska. She currently lives in New York City with her husband and son.

See the events in life of Michele Hicks in Chronological Order 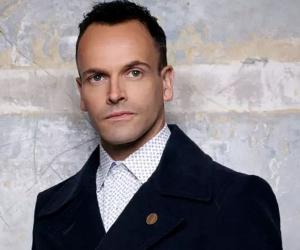