DID WE MISS SOMEONE?
CLICK HERE AND TELL US
WE'LL MAKE SURE
THEY'RE HERE A.S.A.P
Popularity Index
1083
Writers #1323
Quick Facts

Humanitarian Work: Founder of the charity ‘Farms For City Children’

Who is Michael Morpurgo?

Michael Morpurgo is a renowned writer of recent times who has penned award winning books like ‘War Horse’, ‘The Lion Butterfly’ and ‘Private Peaceful’. He grew up to become a teacher and while he narrated stories to children, realization dawn unto him and he found his true calling to become a writer. He embarked on his journey as an author of children’s novels and ever since then this prolific writer has inked numerous books which were well acclaimed by readers and critics alike. He was an acquaintance of renowned poet Ted Hughes and under his guidance he pursued his career as a writer. These two writers, Hughes and Morpurgo, were the ones who came up with the idea of the ‘Children’s Laureate’. Michael Morpurgo was the third British to be awarded with this honor. Morpurgo is attached to the countryside places and wants children of the city who are deprived of this greenery to experience the countryside. In order to accomplish this task, he along with his wife Clara, established the charitable organization named ‘Farms for City Children’. This charity has grown in volume since its inauguration and every year the number of children associated with it has been ascending. His books and these farms continue to enrich and amuse individuals around the world. Libra Writers
Male Writers
British Writers
Libra Men
Childhood & Early Life
He was born on 5th October, 1943, to actor-director Tony Van Bridge and actress Kippe Cammaerts, in St. Albans, Hertfordshire, UK. However, it took many years before he got to know about his biological father.
Tony’s absence during the World War II caused Kippe to tie the knot with Jack Morpurgo and Michael knew him to be his father and even adopted his surname.
He has an elder brother named Pieter Morpurgo, and also half siblings named David Cheyne, Shona Bridge and Peter Cheyne.
He received education from many institutions located in places like Canterbury, Sussex and London. He attended the ‘The King’s School’ and later, joined the ‘Royal Military Academy Sandhurst’.
In 1962, he and his mother were watching the movie ‘Great Expectations’, which starred Tony Bridge. This was when Michael learnt about his father. 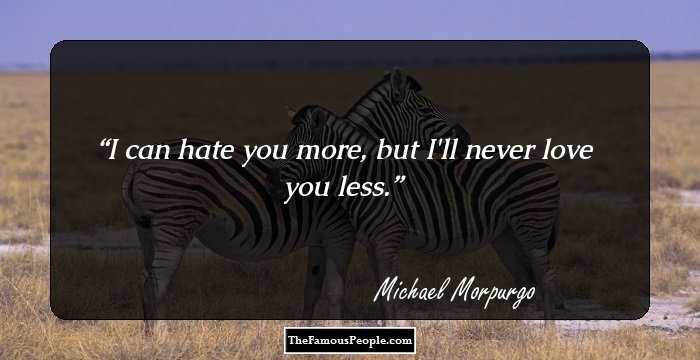 Quotes: You, Love, Never, I
Continue Reading Below
You May Like

Who Is The Most Popular BTS Member?
Career
After graduating from the ‘King’s College London’, he got employed at a primary school as a teacher where he narrated stories to his students. This story-telling exercise made him find the hidden story-teller in him and eventually, he embarked on his journey as an author.
One of his inspirations in writing was poet Ted Hughes who was also his friend, philosopher and guide. Other influences on his literary work were Paul Gallico, Ernest Hemingway and Seán Rafferty.
In 1974, he published his first book ‘It Never Rained: Five Stories’. This was followed by many other books such as 'Living Poets' (compiler with Clifford Simmons), 'Long Way from Home', 'Thatcher Jones', 'The Story-Teller' (compiler with Graham Barrett).
In 1976, the writer along with his wife Clare founded the charity named ‘Farms for City Children’. This charity sought to acquaint city children with the greenery of countryside farms and teach them farmyard work.
This organization has since grown its branches and established three more farms located in Wales, Gloucestershire and Devon. The number of children joining this farm has been increasing every year.
He was one of the founding members of the ‘Children’s Laureate’ along with his mentor Ted Hughes.
During the period 1977-79, he prolifically produced books which include 'Friend or Foe', 'Do All You Dare', 'What Shall We Do with It?', 'All Around the Year' (with Ted Hughes), 'Love at First Sight', 'That's How', 'The Day I Took the Bull By the Horn' and 'The Ghost-Fish'.
From 1980-85, this writer penned several books such as 'The Marble Crusher and Other Stories', 'The Nine Lives of Montezuma', 'Miss Wirtle's Revenge', 'The White Horse of Zennor: And Other Stories from below the Eagle's Nest', 'War Horse', 'Twist of Gold', 'Little Foxes', 'Why the Whales Came' and 'Words of Songs' (libretto, music by Phyllis Tate).
The books authored by this writer during 1986-90 include 'Tom's Sausage Lion', 'Conker', 'King of the Cloud Forests', 'Mossop's Last Chance' (with Shoo Rayner), 'My Friend Walter', 'Albertine, Goose Queen' (with Shoo Rayner), 'Mr. Nobody's Eyes', 'Jigger's Day Off' (with Shoo Rayner) and 'Waiting for Anya'.
Continue Reading Below
In the beginning of the next decade he produced books like 'And Pigs Might Fly!' (with Shoo Rayner), 'Colly's Barn', 'The Sandman and the Turtles', 'Martians at Mudpuddle Farm' (with Shoo Rayner), 'The King in the Forest', 'The War of Jenkins' Ear', 'Arthur, High King of Britain', 'Snakes and Ladders', and 'The Dancing Bear'.
In 1995, he wrote books such as 'Blodin the Beast', 'Mum's the Word' (with Shoo Rayner), 'Stories from Mudpuddle Farm' (with Shoo Rayner), and ‘The Wreck of the Zanzibar'.
During 1996-2000, he inked several books which include 'The Butterfly Lion', 'The Ghost of Grania O'Malley', 'Farm Boy', 'Cockadoodle-doo, Mr Sultana!', 'Escape from Shangri-La', 'Joan of Arc', 'Red Eyes at Night', 'Wartman', 'Kensuke's Kingdom', 'The Rainbow Bear', 'Wombat Goes Walkabout', 'Billy the Kid', 'Black Queen', 'Dear Olly', 'From Hereabout Hill', 'The Silver Swan' and 'Who's a Big Bully Then?'.
In the new millennium he has published numerous books of which ‘Private Peaceful’, Sir Gawain and the Green Knight’, ‘Alone on a Wilde, Wide Sea’, ‘Beowulf’, Running Wild’, ‘Homecoming’, ‘A Medal for Leroy’, ‘Pinocchio By Pinnchio’, Listen to the Moon’ and Mini Kid’ can be regarded as a gist to his recent publications.
This writer’s picture books include ‘Beauty and the Beast’, ‘The Pied Piper of Hamelin’, ‘Jo-Jo the Melon Donkey’, ‘It’s a Dog’s Life’, ‘This Morning I Met a Whale’, ‘Hansel and Gretel’, ‘I Believe in Unicorns’, ‘A Visit to the Farm’, ‘The Orchard Book of Aesop’s Fables’, ‘Dolphin Boy’, ‘Little Albatross’, ‘Gentle Giant’, ‘The Silver Swan’ and ‘Wombat Goes Walkabout’.
This notable writer has been awarded with honorary doctorates from institutions such as ‘University of Suffolk’, ‘Fellow of Kings College’, ‘ University of London’, ‘University of Northampton’, ‘Birmingham City University’ and ‘University of Worcester’.
He is the Vice Chancellor of the ‘Children’s University’ and the President of ‘Book Trust’. 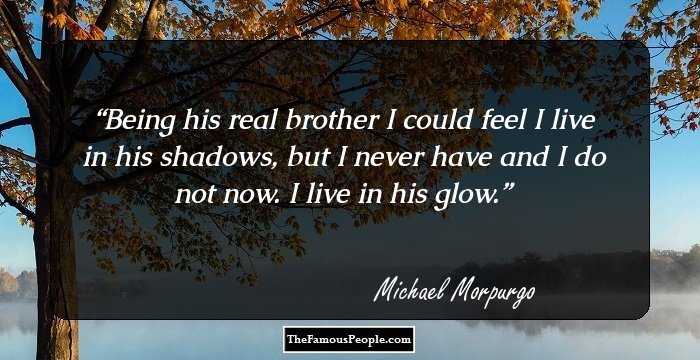 Quotes: Never, I
Major Works
Most of his novels are award winning and highly acclaimed, one of them is his best-selling children’s novel ‘War Horse’ which narrates the story of a horse named Joey and its life during World War I. This has been adapted into a play by Nick Stafford and it has also been made into a movie by Steven Spielberg. Both the paly and the movie were met with huge success.
Continue Reading Below
Another renowned book of this writer is ‘Private Peaceful and this book too revolves around World War I and brings forth the futility of war. This book earned many awards since its publication and has also been adapted into a play and also movie.
Awards & Achievements
In 1993, he was awarded with the ‘Prix Sorcières’ prize for his novel ‘King of the Cloud Forests’. This was followed by many other awards in the following years like the ‘Whitbread Children's Book Award’ which he received for the novel ‘The Wreck of the Zanzibar’. He also won the ‘Nestlé Smarties Book Prize’ (Gold Award) for his children’s novel ‘The Butterfly Lion’.
In 1999, he was again awarded with the ‘Prix Sorcières’ for ‘Wombat Goes Walkabout’. The following year, he won the ‘Red House Children's Book Award’ for ‘Kensuke's Kingdom’. This book also earned him the ‘Prix Sorcières’ award for a third time.
The book ‘The Last Wolf’ earned him the ‘Nestlé Smarties Book Prize’ (Bronze Award) in 2002 and two years later, he won the ‘Red House Children's Book Award’ for ‘Private Peaceful’.
In 2003, he was chosen as the ‘Children’s Laureate’ which made him the third English author to be bestowed with this honor.
This author was awarded with the ‘Blue Peter Book of the Year Award’ and ‘Hampshire Book Award’ in 2005 for his book ‘Private Peaceful’.
The same book again earned him the ‘California Young Reader Medal’ in the year 2008. 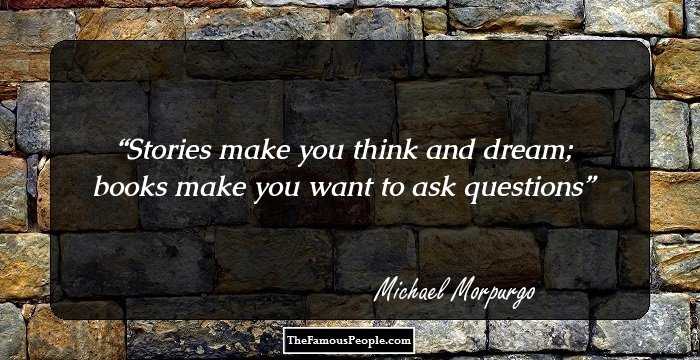 Quotes: You, Think, Books
Personal Life & Legacy
In 1976, Morpurgo married Clare, who was Sir Allen Lane’s eldest daughter. Sir Allen Lane was the founder of the publishing house ‘Penguin Books’. The couple is blessed with three children named Horatio, Sebastian and Rosalind.
Michael and his wife were inducted into the ‘Order of the British Empire’ in the year 1999, for their contribution towards the youth through their charity.
In 2006, this skilled writer was made ‘Officer of the Order of the British Empire’ (OBE) for his contribution to literature.
Many biographies of this famous writer has been written during the years like ‘Michael Morpurgo: War Child to War Horse’, ‘Dear Mr Morpingo’, ‘An Interview with Michael Morpurgo’ and ‘All About Michael Morpurgo’
You May Like

Quotes By Michael Morpurgo | Quote Of The Day | Top 100 Quotes

See the events in life of Michael Morpurgo in Chronological Order 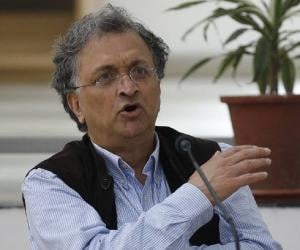