Michael Hutchence was a renowned name in Australia who rose to international fame with his band ‘INXS’. He was born in Australia but owing to his father’s job, the family moved to Hong Kong. He spent early years of his life in Hong Kong and he showed interest in swimming and poetry. However, once they travelled back to Australia, he enrolled at a school where he met Andrew Farris, and they embarked on a friendship which was to last a lifelong. Farriss had an affinity to music and soon Hutchence too inculcated an interest for music. They then started practising music in leisure time and even formed a band when they were still in school. The band comprised a few other members like Andrew’s brothers and their friends. This band was named ‘The Farriss Brothers’. This band made several live performances before the band members turned more professional with the formation of the band ‘INXS’. They amused listeners all over the world with their unique style and recorded many singles which turned out to be huge success in Australia as well as internationally. However, the most renowned face of this band was Michael Hutchence who had a charismatic personality and impacting stage presence. Unfortunately, the world of music suffered a huge loss when this artist met with an early and tragic death. Australian Celebrities
Rock Singers
Lyricists & Songwriters
Australian Men
Male Singers
Childhood & Early Life
He was born on 22nd January, 1960, to Kelland Hutchence and Patricia Hutchence, in Sydney, Australia. The family shifted to Brisbane, and his brother Rhett was born there. The family later moved to Hong Kong where his father was employed at a trading company.
His received education at the ‘King George V School’ situated at Ho Man Tin, Hong Kong, and his early interests include swimming and poetry.
In 1972, his family went back to Sydney and settled in Belrose, where he enrolled at the ‘Davidson High School’. At this school he came in contact with Andrew Farris, who later became a founding member of the band ‘INXS’.
Andrew was a member of the band named ‘Doctor Dolphin’ and asked Michael to join the band. They were joined by Geoff Kennelly and Garry Beers, who studied at the ‘Forest High School’ and soon after, these two boys too joined the ‘Davidson High School’.
The boys practiced music and considered the formation of a band. In 1977, the band named ‘The Farriss Brothers’ was formed with the Farriss brothers Tim, Andrew and Jon as well as Michael, Kirk Pengilly and Garry Beers.
On 16th August, 1977, ‘The Farriss Brothers’ made their first performance at Whale Beach, Sydney, Australia.
The following year, the Farriss family shifted to Perth, Western Australia. Later, Michael and Andrew also went to Perth, and the band reunited. They made a few performances there and a few months later travelled to Sydney, and in 1979, the band ‘INXS’ was formed. 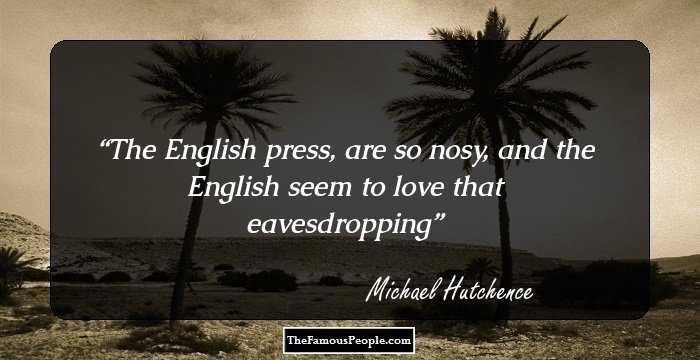 Who Is The Most Popular BTS Member?
Career
On 1st September, the same year, the ‘INXS’ band made their debut performance at the ‘Oceanview Hotel’ in Toukley town, New South Wales.
In 1980, this band recorded their first song ‘Simple Simon (We Are the Vegetables), and in October the same year, their album named after their band as ‘INXS’ was released. Their song ‘Just keep Walking’ recorded during the same time was placed in the ‘Kent Music Report’ chart among Top 40 Australian singles.
Their second album was named ‘Underneath the Colours’ and after this Hutchence recorded a song ‘Speed Kills’ for the film ‘Freedom’ which was released in 1982. This was his first solo song. The following year, their album ‘Shabooh Shoobah’ reached the music stores.
In 1984, his band ‘INXS’ completed the album ‘The Swing’, and this was followed by the release of the Extended Play (EP) which was a version of ‘Dekadance’. This EP ranked at number two in the ‘Kent Music Report Albums Chart’. The same year, his band received several awards at the ‘Countdown Music and Video Awards’.
During the period 1985-90, the band produced albums such as ‘Listen Like Thieves’, ‘Kick’ and ‘X’.
In 1986, he ventured into acting when he was cast in the film ‘Dogs in Space’ in the leading role.
In 1989, he and composer Ollie Olsen together formed the band ‘Max Q’. The band also consisted of members who were acquaintances of Michael and Ollie. They recorded an album named after the band as ‘Max Q’ which was critically acclaimed but did not receive much commercial success.
From 1991 to 1997, Hutchence worked with the ‘INXS’ band in a few albums namely ‘Welcome to Wherever You Are’, ‘Full Moon, and Dirty Hearts’ and ‘Elegantly Wasted’.
During the same time, he also appeared in films such as ‘Frankenstein Unbound’ and ‘Limp’. ‘Elegantly Wasted’ was the final album of ‘INXS’ with him, as the same year, he died in mysterious circumstances.
Continue Reading Below 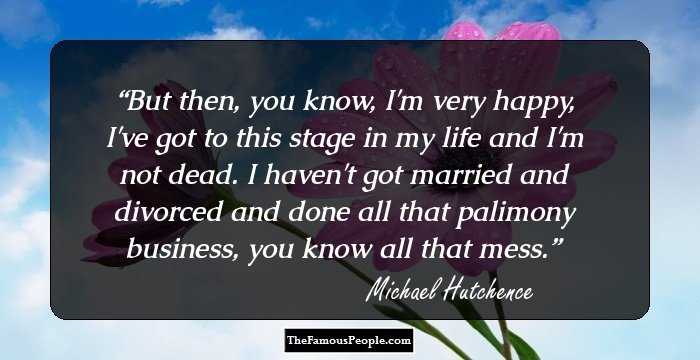 Major Works
The ‘INXS’ band’s albums ‘Kick’ was a major hit and earned international fame to for the band. The album ranked No. 1 in Australian list, No. 3 in ‘US Billboard 200’ list, and No. 9 in UK.
Another huge success of the band was their record ‘X’ which ranked No. 1 in Australia, No. 2 in UK and No. 5 in the US.
Awards & Achievements
In 1984, the ‘INXS’ band won awards in seven categories at the ‘Countdown Music and Video Awards’. Here Hutchence shared the ‘Best Songwriter’ award with Andrew and he also won the ‘Most Popular Male’ award at the same ceremony.
The band ‘INXS’ won five awards at the ‘MTV Video Music Awards’ in the year 1988.
In ‘1991 BRIT Awards’ he received the ‘Best International Artist’ award. 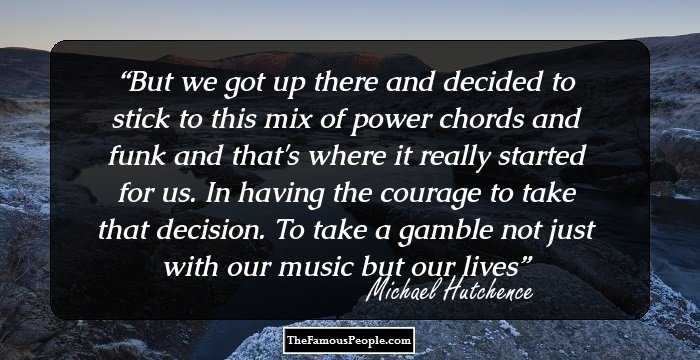 Personal Life & Legacy
This talented vocalist was allegedly linked with singer Kylie Minogue and model Helena Christensen.
He also had a relationship with television personality Paula Yates who was already married to Irish artist Sir Bob Geldof. He even had a daughter with Paula named Tiger Lily who was born on 22nd July, 1996.
Paula and Geldof’s marriage ended on a bitter note and reportedly, Michael was held responsible by the media as being the reason behind the rift.
On 22nd November 1997, Michael Hutchence was found dead in a hotel room in Sydney. He died of suffocation by hanging and the reports regard it a case of suicide. But some of his acquaintances say that he was not a person who would commit suicide. So the reason behind his death is still undetermined.
His only album as a solo artist ‘Michael Hutchence’ was released posthumously in 1999.
Recommended Lists:
Musicians #312
Singers #362
Film & Theater Personalities #1167
You May Like

Quotes By Michael Hutchence | Quote Of The Day | Top 100 Quotes

See the events in life of Michael Hutchence in Chronological Order