Michael Crichton was a man who donned many hats in his lifetime. Right from being a best-selling author to a producer, director and screenwriter, he excelled in all the fields of work. Interestingly, right from a tender age, he developed an affinity for writing and went on to pursue a career in the same. His first ever written work was published in 1966 as ‘Odds On’. In the initial years, he employed a couple of pseudonyms. What made Crichton’s work different from his counterparts was his ability of mixing authentic technical information with fictional stories. It was due to this that his novels had a feel of realism in them. He excelled in the genres of science fiction, medical fiction and technological thrillers. In 1994, he created history be being the only creative artists ever to remain at the No 1 position in three mediums of entertainment including television, film and book, at once. While the adapted television series ER topped at the television ranking chart, Jurassic Park, a film adaption of his novel became a blockbuster movie. Furthermore, the novel, ‘Disclosure’ was declared a major hit. Overall, he has sold over 200 million copies worldwide. Of his 31 totals books written and published, including fiction and nonfiction and two posthumous publications, 14 of them have been adapted into films. To know in details about his life, career, profile and timeline, read through the following lines. American Celebrities
Directors
American Men
Harvard College
Harvard University
Childhood & Early Life
John Michael Crichton was born to John Henderson Crichton and Zula Miller Crichton in Chicago, Illinois.
A prodigious child, he showed an inclination towards writing since an early age. by the age of 14, he even had a travel article published in a column at The New York Times.
To come closer to his dreams of becoming a top-rated writer, he began studying at the Harvard College in 1960. However, due to irreconcilable differences between his professors, he switched to studying biological anthropology.
In 1964, he obtained his bachelor summa cum laude degree and received a Henry Russell Shaw Traveling Fellowship for a year.
In 1965, he took up the post of a visiting lecturer in anthropology at the University of Cambridge. However, this did not continue for long as he enrolled at the Harvard Medical School where he began publishing work.
In 1969, he received M.D. degree from Harvard University. Thereafter, he took up a post-doctoral fellowship study at the Salk Institute for Biological Studies in La Jolla, California.
Interestingly, he never obtained a license to practice medicine and instead devoted much of his time to writing. 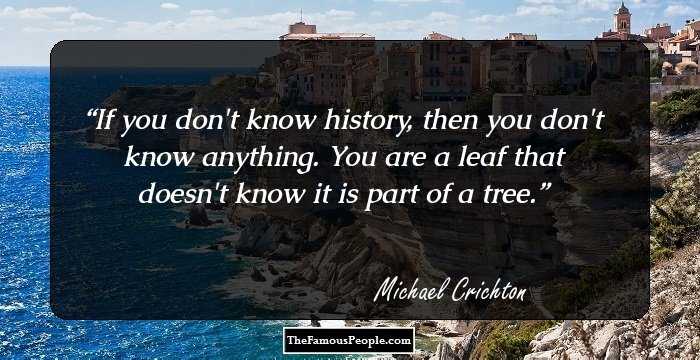 Quotes: You, History
Continue Reading Below
You May Like

The Sexiest Men Of 2020, Ranked
Career
It was while at the Harvard Medical School that he began penning novels under the pseudonym, ‘John Lange’, ‘Jeffrey Hudson’ and ‘Michael Douglas’. Some of his earlier books include, ‘Odds On’ his debut venture, ‘Scratch One’, ‘Easy Go’ and Edgar award winning fiction ‘A Case of Need’.
Year 1969 witnessed the release of his three books, ‘Zero Cool’, ‘The Andromeda Strain’ and ‘The Venom Business’. While the first and the third novels were well received, it was ‘The Andromeda Strain’ that earned him critical attention. The novel was an instant success and became one of the best-selling books of the year.
Keeping up with the pace of his work, in 1970, he came up with three more novels, ‘Drug of Choice’, ‘Grave Descend’ and ‘Dealing: Or the Berkeley-to-Boston Forty-Brick Lost-Bag Blues’. While ‘Dealing’ was adapted into a film, Grave Descent earned him his second Edgar nomination.
Two years henceforth, he published two more novels, ‘Binary’ and ‘The Terminal Man’, the latter of which continued his exploration with technology and highlighted machine and human interaction. It was later adapted into a film.
While the reception of his latest released books ranked less than average, it was his 1975 venture, ‘The Great Train Robbery’ that went on to become a bestseller. The book re-described the events that took place during the Great Gold Robbery of 1855. It was later adapted into a film with him as the director.
The following year, he came up with the novel, ‘Eaters of the Dead’. The book was later made into a film by the name, ‘The 13th Warrior’. It was his second directorial venture.
In 1980, he came up with the novel ‘Congo’. After a seven year period, he penned his next fiction tale, ‘Sphere’ the book has interesting turn of events. It starts of as a science fiction and eventually turns into a psychological thriller. Finally, it delves with the subject of human imagination.
In 1990 came his cult novel ‘Jurassic Park’, which presented fiction as fact, a concept which he had employed in his earlier works. The novel made it to the popular culture and was adapted into a film, directed by Steven Spielberg.
Two years later, he came up with his internationally best-selling novel ‘Rising Sun’. The overwhelming reception of the book led to a film adaptation of it. In 1994, he came up with his controversial work, ‘Disclosure’ that depicted the story of a male protagonist who is sexually assaulted by a female colleague.
Continue Reading Below
Year 1995 witnessed the release of the second instalment of the Jurassic Park series, ‘The Lost World’. It replicated the success of its predecessor and was made into a film in 1997.
In 1996, he released the book, ‘Airframe’ a fictional work based on authentic technical information which gave the novel a feel of realism. Three years later, he released a science fictional novel ‘Timeline’.
His later works include ‘Prey’, ‘State of Fear’ and ‘Next’. While ‘State of Fear’ became an international bestseller with more than 1.5 million copies sold in the first print itself, ‘Next’ was his last novel published while he was alive.
Other than the above listed fictional works, he penned a couple of non-fictional works as well during his lifetime, starting from, ‘Five patients’, ‘Jasper Johns’, ‘Electronic Life’ and ‘Travels’. 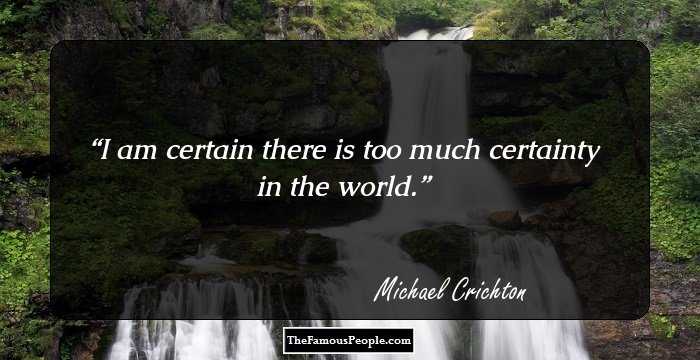 Quotes: I
Awards & Achievements
In his lifetime, he received a couple of awards including, two Mystery Writers of America's Edgar Allan Poe Award, Association of American Medical Writers Award, Academy of Motion Picture Arts and Sciences Technical Achievement Award, Writers Guild of America Award George Foster Peabody Award, Primetime Emmy Award for Outstanding Drama Series and American Association of Petroleum Geologists Journalism Award.
He was enlisted by People’s magazine in the list of ‘Fifty Most Beautiful People’.
Personal Life & Legacy
He is said to have married five times in his lifetime, four of which ended in divorce. His spouses include, Joan Radam, Kathleen St. Johns, Suzanna Childs, Anne-Marie Martin and Sherri Alexander.
With Anne-Marie Martin, he fathered a daughter Taylor Anne. He even fathered a son from Sherri Alexander, John Michael Todd Crichton, but did not live long enough to see him born.
Only after his death, it was found that he was suffering from cancer and had been diagnosed with lymphoma. He was undergoing chemotherapy treatment at the time of his death. He breathed his last on November 4, 2008.
Posthumously, three of his novels were published. While the manuscript for ‘Pirate Latitudes’ was completed, ‘Micro’, a techno-thriller novel was two-third complete. It was completed by Richard Preston and later released. His book 'Dragon Teeth' was published in 2016, eight years after his death. 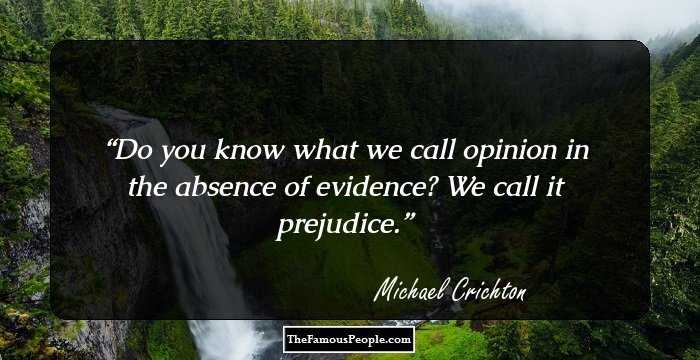 Quotes: You
Trivia
He was an American best-selling author, known for penning science fiction and technology thrillers. He authored popular cult novels such as Jurassic Park, The Andromeda Strain, State of Fear and so on.

Quotes By Michael Crichton | Quote Of The Day | Top 100 Quotes

See the events in life of Michael Crichton in Chronological Order