Megan Fox is an American actor and model. At the tender age of five, she enrolled for dance and drama classes. She continued training even after her family moved to Florida from Tennessee. She began modeling at the age of 13, and won several awards. She made her acting debut at the age of 15 when she played ‘Brianna’ in the film ‘Holiday in the Sun.’ She received her breakthrough role as ‘Mikaela Banes’ opposite Shia LaBeouf in ‘Transformers’ for which she was nominated for a ‘MTV Movie Award’ and three ‘Teen Choice Awards.’ However, it was her role in the sequel ‘Transformers: Revenge of the Fallen’ that brought her much acclaim. The role also earned her ‘Teen Choice Awards’ in two categories, namely ‘Choice Female Hottie’ and ‘Choice Summer Movie Star Female.’ Her role in ‘Jennifer’s Body’ was also received well by her fans, and she won ‘Teen Choice Awards’ under the ‘Choice Female Hottie’ and ‘Choice Movie Actress: Horror/Thriller’ categories. American People
American Women
Tennessee Actresses
Taurus Actresses
American Actresses
Childhood & Early Life
Megan Denise Fox was born on May 16, 1986, in Oak Ridge, Tennessee, USA, to Gloria Darlene Cisson and Franklin Thomas Fox. She is of English, Scottish, German, French, Scots-Irish, and Powhatan Native American ancestry.
She was raised as a Pentecost, but attended a Catholic school. Her parents divorced when she was young. Her mother then married Tony Tonachio. Her mother and her stepfather raised her and her sister.
At the age of five, she enrolled for drama and dance classes in Kingston, Tennessee. She was also a part of the chorus of ‘Kingston Elementary School’ and the swim team of ‘Kingston Clippers.’
Her family moved to Florida when she was 10. She continued training, and began modeling at 13, after winning several awards at the 1999 ‘American Modelling and Talent Convention’ in Hilton Head, South Carolina. 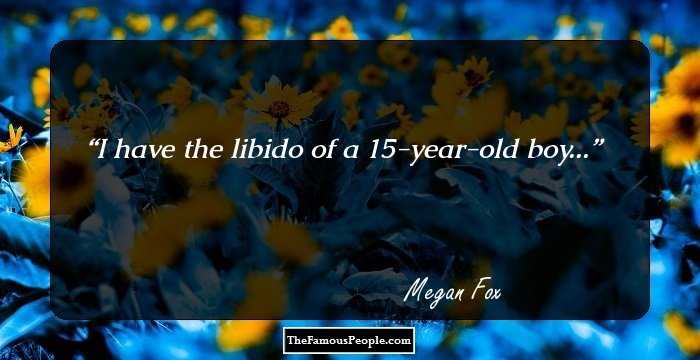 The Best Black Actresses Of All Time
Career & Later Life
Fox began her acting career at the age of 15 when she played the spoiled heiress ‘Brianna Wallace’ in the 2001 film ‘Holiday in the Sun.’ Also starring Ashley Olsen as ‘Alex Stewart,’ the film had a direct-to-DVD release.
She guest-starred on ‘What I Like About You’ and ‘Two and a Half Men.’ In 2004, she played ‘Carla Santini’ in ‘Confessions of a Teenage Drama Queen,’ which starred Lindsay Lohan in the lead.
In 2009, Fox reprised her role as ‘Mikaela Banes’ in ‘Transformers: Revenge of the Fallen,’ the sequel to the 2007 film ‘Transformers.’ Directed by Michael Bay, the film starred Shia LaBeouf, Josh Duhamel, Tyrese Gibson, and John Turturro in important roles.
She was to star in the subsequent sequel ‘Transformers: Dark of the Moon,’ but was not included in the cast because of her statements likening director Michael Bay to Adolf Hitler.
In 2009, she starred as the eponymous lead in the film ‘Jennifer’s Body,’ which was written by the Academy Award-winning screenwriter Diablo Cody. She also starred in ‘Jonah Hex’ as ‘Lilah.’ Unfortunately, the movie was a commercial failure.
She featured with Dominic Monaghan in the 2010 music video of Eminem and Rihanna’s single ‘Love the Way You Lie.’ She also appeared in magazines, such as ‘Maxim,’ ‘Rolling Stone,’ and ‘FHM.’
Fox starred alongside Mickey Rourke in ‘Passion Play,’ which received poor reviews. She then voiced the ‘Hawaiian Spinner Dolphins’ in ‘Na Nai’a: Legend of the Dolphins,’ a 3D documentary film.
In 2012, she appeared briefly in Sacha Baron Cohen’s comedy ‘The Dictator.’ She then went on to appear in Judd Apatow’s ‘This Is 40.’ She voiced the character of ‘Lois Lane’ in the film ‘Robot Chicken DC Comics Special.’
In January 2013, Fox appeared in a Brazilian television commercial for ‘Brahma Beer.’ She set aside her differences with director Michael Bay to work in ‘Teenage Mutant Ninja Turtles’ in which she played ‘April O’Neil.’ In 2016, she reprised her role as ‘April O’Neil’ in ‘Teenage Mutant Ninja Turtles: Out of the Shadows.’
Continue Reading Below
She appeared in the 2019 movie ‘Above the Shadows,’ which is a supernatural romance film, written and directed by Claudia Myers. In the same year, she also played ‘Soledad Paladin’ in James Franco-directed comedy-drama film ‘Zeroville.’ In 2019, she was also cast to play ‘Jacqueline’ in a drama film titled ‘Big Gold Brick.’ 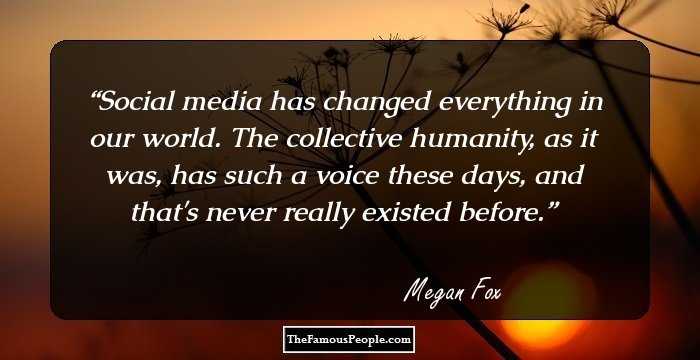 Major Works
Fox landed a regular role on the ‘ABC’ sitcom ‘Hope & Faith,’ where she portrayed the character of ‘Sydney Shanowski.’ She appeared in the second and third season of the show, before it was canceled in 2006.
In 2007, she received her breakthrough role as ‘Mikaela Banes,’ opposite Shia LaBeouf, in ‘Transformers.’ She was nominated for ‘MTV Movie Award’ under the ‘Breakthrough Performance’ category, and for three ‘Teen Choice Awards’ for her performance in the film.
Awards & Achievements
Fox won the 2009 ‘Teen Choice Award’ in two categories: ‘Choice Female Hottie’ and ‘Choice Summer Movie Star Female’ for her performance in the film ‘Transformers: Revenge of the Fallen.’ Her role in the film also won her ‘Best Sci-Fi Actress’ award at ‘Scream Awards.’
In 2009, she won the ‘Best Performance by a Human Female’ at ‘Spike Video Game Awards’ for her work in a video game titled ‘Transformers: Revenge of the Fallen.’
In 2010, she won the ‘Teen Choice Awards’ under the ‘Choice Female Hottie’ and ‘Choice Movie Actress: Horror/Thriller’ categories for her performance in the movie ‘Jennifer’s Body.’ 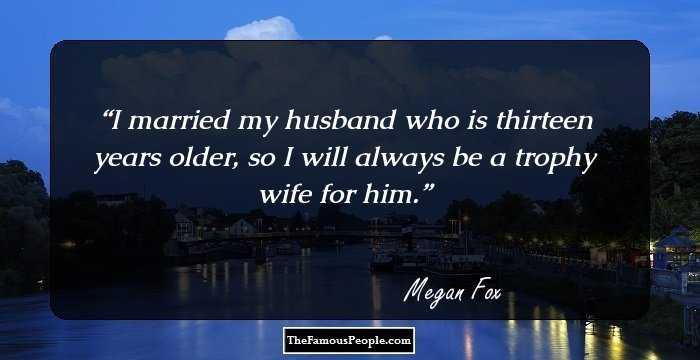 Personal Life & Legacy
Megan Fox met actor Brian Austin Green in 2004 on the sets of ‘Hope & Faith.’ She was 18 years old then, and he was 30. They got engaged two years later.
She married Brian Green on June 24, 2010 at the ‘Four Seasons Resort’ in Maui. They have a son named Noah Shannon Green. She is also a stepmother to Green’s son Kassius, who was born from Green’s previous relationship with Vanessa Giovinazzo. Megan Fox and Brian Green called it quits in 2020.
She suffers from fear of flying, and listens to Britney Spears’ songs while flying to overcome her fear. She also suffers from a form of brachydactyly called ‘clubbed thumb.’
Trivia
This attractive actor has eight tattoos, including the tattoo of her husband’s name on her hip, a picture of Marilyn Monroe’s face on her right forearm, and a crescent moon overlapping a star above her right ankle.

See the events in life of Megan Fox in Chronological Order