McKenna Grace is an American child actor who gained popularity for playing Jasmine, the youngest daughter of the Bernsteins, in the Disney XD television series 'Crash & Bernstein' starting in 2012. Since then, she has appeared in a host of television shows and movies, and boasts of an impressive portfolio that would put many adult actors to shame. In 2013, she landed a recurring role in the long-running television series 'The Young and the Restless', in which she portrayed the character of Faith Newman for 50 episodes. Over the years, she has made appearances on various television shows, such as 'Instant Mom', 'CSI: Crime Scene Investigation', 'K.C. Undercover', 'The Vampire Diaries', 'Dog with a Blog', and 'Once Upon a Time'. She is currently a regular cast of the ABC political drama series 'Designated Survivor', in which she plays Penny Kirkman. She has also acted in many Hollywood films like 'Goodbye World', 'Frankenstein', 'Mr. Church', and 'Independence Day: Resurgence'. She was cast in the lead role in the 2017 drama film 'Gifted', in which she worked alongside Chris Evans, who also plays Captain America, her favorite superhero, in Marvel movies.

A big fan of yesteryear's child actress Shirley Temple, McKenna Grace wanted to be an actor since she was a little child. She went to her first audition while spending a vacation with her family in Los Angeles. She debuted her acting career at the age of 6, when she starred as Jasmine Bernstein in the Disney XD television series 'Crash & Bernstein' in 2012. Around the same time, she also acted in her first short film, 'R'.

In 2013, she appeared in her first feature film, the post-apocalyptic movie 'Goodbye World', followed by another role in the comedy horror film 'Suburban Gothic'. That year, she continued to appear on television in the series 'The Goodwin Games' and 'Instant Mom', and landed another recurring role in the CBS soap opera 'The Young and the Restless'. She was also cast in the pilot episode of the show 'Joe, Joe & Jane', which was cancelled later.

She went on to feature on almost every popular television series at least for one episode. She also drew attention for featuring in mainstream movies like 'Independence Day: Resurgence' and for lending her voice in 'The Angry Birds Movie'. She starred in films such as 'Gifted', 'How to Be a Latin Lover' and 'Amityville: The Awakening' in 2017, and 'I, Tonya' in 2018, as well as the television series 'Designated Survivor' which had been renewed for a second season.

Despite her young age and charming appearance, McKenna Grace can often act like an old soul and is capable of mature thinking. This is one of the reasons she landed the lead role of a math genius in the film 'Gifted', in which actor Chris Evans plays the role of her uncle. The two also share their love for music and dance, and spent a lot of time together on the sets of their film, eventually becoming "best friends" despite their huge age gap. They would often sing songs by the band the 'Presidents of the United States of America', her father's favorite. She also put her love for singing to good use while filming the scenes from the movie: her mother turned her lines with complicated math equations into a song which she then sang repeatedly to memorize for the shoot. Already a professional actor, she also watched a number of films featuring child prodigies, following director Marc Webb's advise, to portray her role properly.

McKenna Grace was born on June 25, 2006 in Texas, United States. Her family relocated to Los Angeles after she landed a recurring role in the TV series 'Crash & Bernstein'. None of her family members were from the film industry. While she is the only actor in the family, her mother supported her acting goals from the very beginning. She is homeschooled due to her busy schedule and is taught by tutors on the sets. She is very interested in singing and dancing, even though she has not taken professional lessons yet.

She is a huge animal lover and has two dogs: a Morkie named Marshmallow and a Pomeranian named Baby Unicorn. She loves animals so much that she decided to become a vegetarian at the age of 7. She also has an extensive collection of over hundred stuffed animals, all with unique names, and often brings a few with her during her travels. She got the chance to spend some time at an animal shelter during the filming of a scene in her movie 'Gifted'. While she loves all animals, she is allergic to cats. 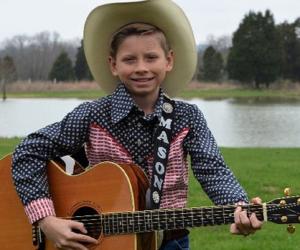