Advanced Search
Matthew Macfadyen is a British actor, best known for playing Tom Quinn in the television drama series ‘Spooks.’ After starting his acting career in theatre, Macfadyen went on to perform in popular films and TV series like ‘Criminal Justice II,’ ‘Pride & Prejudice,’ ‘Death at a Funeral,’ and ‘Robin Hood.’ In 2007, he was nominated for a ‘British Academy of Film and Television Arts’ (BAFTA) award and won the ‘Best Actor’ award at the ‘Royal Television Society Awards’ for his work in a ‘Channel 4’ drama titled ‘Secret Life.’ In 2010, he won the ‘BAFTA TV Award’ for ‘Best Supporting Actor’ for portraying Joe Miller in the ‘BBC’ television drama ‘Criminal Justice II.’ Macfadyen has also been nominated for prestigious awards, such as the ‘British Independent Film Award’ (BIFA), ‘London Film Critics Circle Award,’ and ‘Screen Actors Guild Award.’ Macfadyen has lent his voice for several audio books and documentary films, such as ‘Stories We Could Tell,’ ‘The 9/11 Liars,’ ‘The Blair Years,’ and ‘Last Party at the Palace.’ 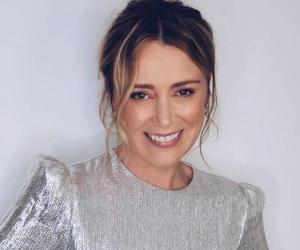 British People
Royal Academy Of Dramatic Art
Tall Celebrities
Tall Male Celebrities
Libra Actors
Childhood & Early Life
David Matthew Macfadyen was born on October 17, 1974, in Norfolk, England, to Meinir and Martin Macfadyen. Because of his father’s occupation, Matthew Macfadyen and his family traveled frequently, resulting in him growing up in places like England, Scotland, and Indonesia.
He went to ‘Oakham School’ in Rutland among many other schools. At the age of 17, he was enrolled at the ‘Royal Academy of Dramatic Art’ (RADA) in London. While studying at the drama school, he was inspired by Ingmar Bergman’s historical period drama film ‘Fanny and Alexander.’
During his time at ‘RADA,’ he appeared in many stage plays, such as Mikhail Bulgakov’s ‘The Crimson Island,’ Ben Benison’s ‘Lorca’s Death,’ Marivaux’s ‘The Feigned Inconstancy,’ John Gay’s ‘The Beggar’s Opera,’ Dale Wasserman’s ‘One Flew Over the Cuckoo’s Nest,’ and Stephen Jeffreys’ ‘The Libertine.’
He graduated from the ‘Royal Academy of Dramatic Art’ in 1995 and started working with the international theatre company ‘Cheek by Jowl.’ In 1996, he collaborated with the ‘Royal Shakespeare Company’ (RSC) and played an important role in William Shakespeare’s play ‘A Midsummer Night’s Dream.’ Macfadyen established himself as a successful theater actor before making his television debut in 1998.
Continue Reading Below
Career
After making his TV debut in ‘ITV’ network’s 1998 television movie ‘Wuthering Heights,’ Macfadyen appeared in TV mini-series, such as ‘Murder Rooms: The Dark Beginnings of Sherlock Holmes,’ ‘Perfect Strangers,’ and ‘The Way We Live Now.’ He received his big breakthrough when he was cast to play Tom Quinn in the British television drama series ‘Spooks.’
Meanwhile, he made his film debut in 2000 when he played Nigel in the British comedy film ‘Maybe Baby.’ The following year, he played Lt. Cave in the Michael Apted-directed espionage thriller film ‘Enigma.’ Macfadyen was nominated for ‘BIFA Award’ for ‘Best Performance by an Actor in a British Independent Film’ for playing Paul Prior in the 2004 film ‘In My Father’s Den.’
In 2005, he played Fitzwilliam Darcy in the Joe Wright-directed romance film ‘Pride & Prejudice’ for which he was nominated for the ‘London Film Critics Circle Award’ for ‘Best British Newcomer of the Year.’ He returned to theatre in 2005 when he played Prince Hal in William Shakespeare’s play ‘Henry IV’ for the ‘Royal National Theatre.’
In 2007, he was seen in films, such as ‘Grindhouse’ and ‘Death at a Funeral.’ He was also seen alongside actors like Michelle Ryan and Rowan Atkinson in a short sketch titled ‘Mr. Bean’s Wedding.’ In the same year, he played an important role in Bruce Norris’ stage play ‘The Pain and the Itch.’
In 2008, he was seen in three television series, namely ‘Ashes to Ashes,’ ‘Little Dorrit,’ and ‘Agatha Christie’s Marple a Pocket Full of Rye.’ He was also seen in a couple of films titled ‘Incendiary’ and ‘Frost/Nixon.’ For his performance in ‘Frost/Nixon,’ Macfadyen was nominated for the ‘Screen Actors Guild Award’ for ‘Outstanding Performance by a Cast in a Motion Picture.’
He was cast to play Joe Miller in the popular television drama series ‘Criminal Justice II’ in 2009. The following year, he won the ‘BAFTA TV Award’ for ‘Best Supporting Actor’ for his work in ‘Criminal Justice II.’ In 2010, he played Sheriff of Nottingham in the epic historical drama film ‘Robin Hood.’ In the same year, he was seen in a couple of TV mini-series titled ‘The Pillars of the Earth’ and ‘Any Human Heart.’ He was also seen playing a prominent role opposite Kim Cattrall in Noël Coward’s play ‘Private Lives.’
From 2012 to 2016, he played Detective Inspector Edmund Reid in the British TV series ‘Ripper Street.’ In 2015, he played Georg von Trapp in the Ben Verbong-directed film ‘The von Trapp Family: A Life of Music.’ In the same year, he was also seen in a couple of television series, such as ‘The Enfield Haunting’ and ‘The Last Kingdom.’ In 2016, he played Winston Churchill’s son Randolph Churchill in the British drama television film ‘Churchill’s Secret.’
In 2017, he was cast to play the world-renowned American financier and banker J.P. Morgan in the American epic historical drama film ‘The Current War.’ In 2018, he played Mr. Stahlbaum in the American fantasy adventure film ‘The Nutcracker and the Four Realms.’ He was also cast to play Tom Wamsgans in the satirical comedy-drama television series ‘Succession.’
Macfadyen has lent his voice for several documentaries and audio books. Some of the projects in which he has worked as a voice actor include ‘Essential Poems’ (2003), ‘The Hungerford Massacre’ (2004), ‘Last Party at the Palace’ (2007), ‘Dangerous Jobs for Girls’ (2008), and ‘Inside MI5’ (2009).
Family & Personal Life
Macfadyen is of mixed origin as his maternal grandparents were of Welsh descent, while his paternal grandparents were Scottish. His mother Meinir is a former actress and currently works as a drama teacher, while his father Martin is an oil executive.
He started dating his ‘Spooks’ co-star Keeley Hawes in 2002. Upon his marriage to Keeley Hawes in November 2004, Macfadyen became Myles’ stepfather. Myles was born from Hawes’ previous marriage with Spencer McCallum. In December 2004, Macfadyen and Hawes were blessed with a daughter named Maggie. In September 2006, the couple had their second child, a son named Ralph.

See the events in life of Matthew Macfadyen in Chronological Order