Matt Yoakum is an American musician and a YouTube star who runs the popular YouTube channel ‘Matt Slays.’ Launched on April 15, 2015, the channel has amassed over 6 million subscribers. He and his wife, Rebecca Zamolo, daily upload videos on the ‘Matt Slays’ channel which features a mix of vlogs, music, and challenges. He also works as a lyricist, songwriter, and music producer, and posts his own music on the channel. He is quite popular on TikTok as well; his ‘matt.slays’ account has over 3.1 million fans. A lot of his content is comedy based, and he has deep passion for music and all other “crafts” he does. Matt often teams up with Joshua David Evans, who is also a musician who runs his own YouTube channel JoshuaDTV. Logan Paul
17th July In History
DID WE MISS SOMEONE?
CLICK HERE AND TELL US
WE'LL MAKE SURE
THEY'RE HERE A.S.A.P
Quick Facts

Matt started singing and performing when he was quite young. As a teenager, he joined a boy band called Townsend in San Francisco Bay Area. He had to give a few trials, after which Townsend selected him as a member. The group sang hip-pop style music. Matt’s good looks and vocal qualities matched the expectations of the group. He also brought with him a little bit of experience in music, which helped the group significantly. In addition, he was an excellent lyricist and pianist, which the band was looking for. After he joined the band, Matt was chosen to be one of the 25 finalists for the ‘Making the Band’ show, which was a Lou Pearlman production, telecast on ABC television.

Cancer Youtubers
American Vloggers
American YouTubers
Male Youtube Singers
While he was still in the university, he started working with Hilton Hotels in the sales department in February 2003. He worked with them for long six years. During this period, he also performed live to win an MTV song-writing competition.
Recommended Lists:

Now a composer, cinematographer, and an editor, Matt has directed a number of web episodes and short films. He became popular with his musical videos like ‘Shit LA People Say,’ and ‘Shit Fat Vs. Skinny Girls Say’ in 2012, and ‘The Real Housewives of New Jersey Parody’ in 2013. His video titled ‘Michael Jackson Mash-up (Love Never Felt So Good / Man in the Mirror)’ and ‘Fight Song Cover’ in 2015 became immensely popular as well.

Matt was born on July 17, 1980 in Pueblo, Colorado, USA. He went to the Western Oregon University from 2000-04. After dating Rebecca Zamolo for ten years, he became engaged to her. He married her on May 17, 2014. Rebecca is also a famous YouTuber, writer, and producer. In March 2022, the couple welcomed their daughter Zadie Hope. Besides music, Matt loves dogs. 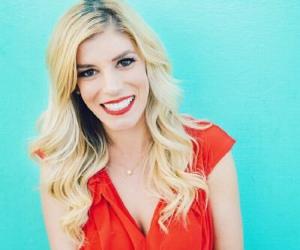