Maria Callas was one of the most accomplished coloratura sopranos of the last century. She was instrumental in revitalizing opera with her dramatic skill, range and technique that left audiences spellbound. Born Maria Kalogeropoulos to Greek parents in America, her mother shifted to Greece. There, Maria began receiving formal training in opera singing. Her relationship with her domineering mother was strained. After World War II, she moved to Italy to launch her career there. Her Italian debut was a performance of ‘La Gioconda’ at the Verona Arena. Her performance in ‘Tristan and Isolde’ and ‘Turandot’ made her a celebrity figure in Italy. She has performed Bellini's ‘Norma’ many times. She married Giovanni Battista Meneghini, an industrialist, and toured South America. Her collaboration with the Italian genius, Tullio Serafin, was highly productive. Apart from performing at Milan’s La Scala, the most cherished and renowned of opera houses, she performed at the Lyric Opera of Chicago, and the New York Metropolitan Opera. Her affairs with business tycoon Aristotle Onassis, and separation from her husband took a toll on her personal life and career. Many performances got cancelled and this adversely affected her career. Her dramatic weight loss enhanced her beauty but seemed to have affected her voice. She was honored with a Lifetime Achievement Grammy posthumously. Andrea Bocelli
DID WE MISS SOMEONE?
CLICK HERE AND TELL US
WE'LL MAKE SURE
THEY'RE HERE A.S.A.P
Quick Facts

Greek Celebrities
Soprano Singers
Greek Women
Greek Singers
Women Singers
Childhood & Early Life
Maria Callas was born Sophia Cecelia Kalos on December 2, 1923 to Greek parents, George and Evangelia at Flower Hospital in Manhattan. Her father owned and ran a pharmacy in Manhattan where she spent much of her childhood.
She had a sister Yakinthi; her brother Vassilis died before she was born. Her parents were an incompatible couple as her mother was domineering while her father was a laidback person.
In 1937, Evangelia returned to Athens taking her daughters with her. When Maria’s talent for singing became apparent, she began to unduly pressurize her. She was also made to feel ugly, fat, and clumsy.
Initially tutored by Maria Trivella at the National Conservatoire, she impressed the Spanish soprano Elvira de Hidalgo in an audition, and was instructed by him at the Athens Conservatoire, from 1939. 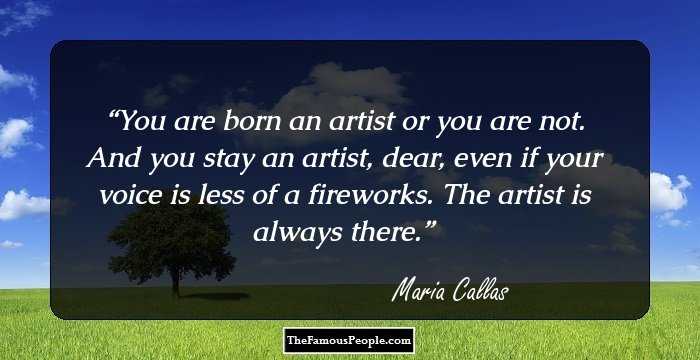 Quotes: You
Continue Reading Below
Career
Maria Callas’s professional debut happened in 1941 as Beatrice in Franz von Suppé's ‘Boccaccio’. The next year, she starred as Tosca, and sang for Marta in ‘Tiefland’, by Eugen d'Albert, at the Olympia Theatre.
In1945, she went back to America where her father planned to re-start her career. Her musical career had already been established with 56 performances and 20 recitals to her credit.
Giovanni Zanatello, the Artistic Director for the 1947 Verona Opera Festival, was in America scouting for fresh talent. Engaged by Zanatello as ‘La Gioconda’, and conducted by Tullio Serafin, she debuted in Italy.
Though her performance was a success, she found work hard to come by. But, after she sang ‘Isolde’ in Italian under Serafin, she began to be engaged for work mostly in Turandot, Italy.
In 1948, she sang ‘Norma’ in Florence. This was the first time she performed the opera. Over her career, she would perform the opera 89 times.
She sang at the Teatro Colon in Buenos Aires, Argentina, in 1949. Her husband Meneghini had become her manager. He was responsible for developing her career in the next couple of years.
A performance at Milan’s La Scala had eluded her until 1950, when she played the lead role in Verdi’s ‘Aida’. ‘Aida’ was greeted with a lukewarm reception, much to her disappointment.
In 1951, she won over La Scala with ‘I Vespri Siciliani’ and received critical acclaim. She went on to perform in 26 operas at the World’s main opera house.
In 1952, she debuted in London at the Royal Opera House as Adalgisa in ‘Norma’, with veteran mezzo soprano Ebe Stignani. Her "a love affair" with the House continued for a good 13 years.
Continue Reading Below
Following a contract with EMI, her first commercial recording as Lucia di Lammermoor, complete opera recordings at La Scala of 'I Puritani' and 'Cavalleria Rusticana' and 'Tosca' were done in 1953.
In 1955, she was sued by her former manager, Eddie Bagarozy, who claimed to be her sole representative and wanted compensation for the expenses incurred by him. The case was settled out of court.
She made her first appearance at the Metropolitan in New York in 1956. She performed ‘Norma’, ‘Tosca’ and ‘Lucia". Despite being labeled an ungrateful daughter by the press, she received a standing ovation.
Her relationship with La Scala went sour after she refused to accommodate an unscheduled performance at the Edinburgh Festival conducted by them. In 1958, the Metropolitan Opera, New York, terminated the contract with her.
In 1958, scheduled to perform at the Rome Opera House before Italy’s president, she fell sick due to the previous night’s celebration and drinking. The performance was cancelled, and she received much bad press.
Her last stage performance was at the Royal Opera House, also known as Covent Garden, in 1965. She acted in the film ‘Medea’ by the Italian filmmaker Pier Paolo Pasolini, which was not successful.
In the seventies, she staged a series of joint recitals and conducted master classes at the Juilliard School in New York. Her final public performance was in 1974, in Sapporo, Japan. 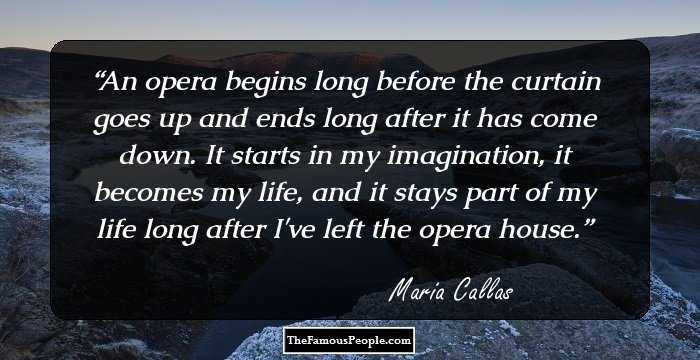 Quotes: Life
Major Works
In1944, she performed the role of Leonore in a Greek version of Fidelio, a German opera by Beethoven at the Odeon of Herodes Atticus. German critic Friedrich Herzog considered it her "greatest triumph":
In 1949, chosen as Elvira in ‘I Puritani’ at La Fenice at short notice, her incredible bel canto performance rekindled interest in the neglected operas of Cherubini, Bellini, Donizetti, and Rossini.
Awards
Voted the greatest soprano by BBC Music Magazine in 2007, Maria Callas was posthumously honored with the Grammy Lifetime Achievement Award. She was voted into the Gramophone Magazine's Hall of Fame, five years later. 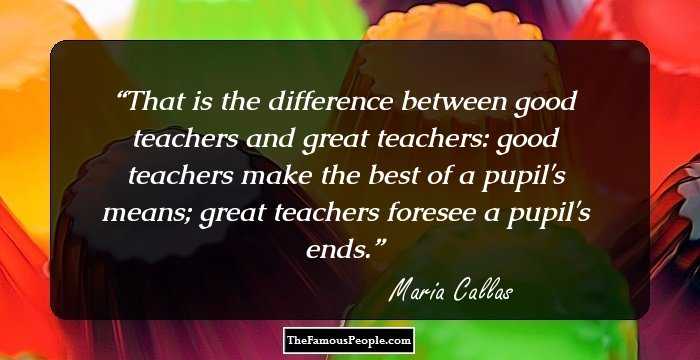 Personal Life & Legacy
Between 1949 and 1959 she was married to a wealthy industrialist Giovanni Battista Meneghini, who began to manage her career.
She had a 9-year love affair with Aristotle Onassis and they were expected to marry, but he married Jackie Kennedy, John F. Kennedy's widow. The affair continued clandestinely until Onassis died in 1975, leaving her heartbroken.
In 1953, determined to look more attractive, and to do justice to the dramatic role she was performing, she lost almost 80 pounds. Some say that it affected the strength of her voice.
Trivia
There were many rumors as to how this soprano shed the extra flab- one such interesting rumor was that she had swallowed a tapeworm.
This soprano was shortsighted and refused to wear her glasses or contact lenses. It was frustrating for conductors who hoped the singer would watch for tempos.

Quotes By Maria Callas | Quote Of The Day | Top 100 Quotes

See the events in life of Maria Callas in Chronological Order 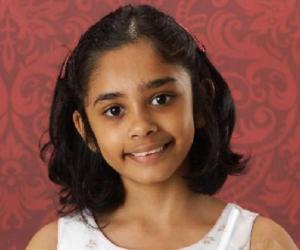