(One of the Most Successful Female Snipers in Recorded History)

Lyudmila Mikhailovna Pavlichenko was a Soviet Union sniper, considered the most successful female sniper and one of the top military snipers in war history. An amateur sharpshooter, Lyudmila kept her university study on hold to join the Red Army as Germany invaded Soviet Union. Although she had choice of serving as a nurse she insisted to join the infantry and was assigned to the 25th Rifle Division of the Red Army. She recorded a total of 309 sniper kills in the Second World War and was pulled back from combat due to her growing status. She was sent to Canada and the United States for publicity visit. She became the first citizen of Soviet Union who was received by a US President when she was welcomed by Franklin D. Roosevelt to the White House. She was later promoted as major, however she never returned to the warfront and instead gave training to Soviet snipers till end of the war. She received several accolades for her war contributions including being awarded the Gold Star of the Hero of the Soviet Union. Nicholas Colasanto
DID WE MISS SOMEONE?
CLICK HERE AND TELL US
WE'LL MAKE SURE
THEY'RE HERE A.S.A.P
Quick Facts

Russian Celebrities
Women Soldiers
Russian Soldiers
Cancer Women
Childhood & Early Life
She was born Lyudmila Mikhailovna Belova on July 12, 1916, in Bila Tserkva, Russian Empire (presently in Ukraine). When she was 14 years old she relocated to Kiev with her family where she got enrolled into an OSOAVIAKhIM shooting club and eventually evolved as an amateur sharpshooter. Meanwhile she worked at the Kiev Arsenal factory as a grinder.
She married Alexei Pavlichenko in 1932 when she was just 16 years old; however the marriage did not last long. The couple together had a son called Rostislav born in 1932.
Lyudmila obtained a master’s degree in history from the Kiev University in 1937 majoring on the life of Bohdan Khmelnytsky.
Continue Reading Below
Role During the Second World War
The Axis invasion of the Soviet Union, in the midst of the Second World War code named as Operation Barbarossa began on June 22, 1941. During that time Lyudmila was attending her fourth year studies at the Kiev University. She came forward as one of the first round of volunteers at the Odessa recruiting office.
Although she was given the option of serving as a nurse, she requested to be assigned in the infantry and accordingly she was delegated to the 25th Rifle Division of the Red Army. With this she emerged among the 2000 female snipers who fought in the Second World War and remained one of the 500 snipers who survived the war.
She used a semi-automatic Tokarev SVT-40 rifle having 3.5X telescopic sight to accomplish her first two sniper kills that occurred close to Belyayevka in early August 1941. As the month progressed she garnered a hundred confirmed sniper kills to her name following which she was elevated to the rank of senior sergeant on that very month.
She recorded a total of 187 sniper kills fighting near Odessa for around 2 ½ months. On October 15, 1941, the Romanians seized control of Odessa following which her unit retreated to Sevastopol on the Crimean Peninsula. There she fought for over 8 months.
In May 1942, the Southern Army Council cited Lyudmila, who was recently elevated as a Lieutenant, for eliminating 257 German soldiers. The confirmed sniper kills by her amounted to 309 during the Second World War among whom 36 were snipers from the enemy sides.
A mortar fire injured her in June 1942 and although she eventually recovered from such wound, within a month of such recovery she was pulled back from the warfront due to her growing status.
She made publicity visit in support of the war to Allied countries, Canada and the United States. She emerged as the first citizen of the Soviet Union who was received by a President of the United States when Franklin D. Roosevelt welcomed the ace sniper to the White House. She also received invitation from the First Lady of the US Eleanor Roosevelt to tour across the US and share her experiences.
She attended the International Student Assembly in Washington, D.C. and also the Congress of Industrial Organizations’ meetings. She appeared in public rallies and gave speeches in the New York City and Chicago.
She received a Colt semi-automatic pistol from the US and a sighted Winchester rifle from Canada. The latter is now displayed in Moscow’s Central Armed Forces Museum.
Continue Reading Below
She went to the UK and visited Coventry on November 21, 1942. There the Coventry workers gave her donations to garner 3 X-ray units for the Red Army. Her visits of the day included the Standard Car Factory, which garnered her much of the funds collected, the Birmingham factory, the Alfred Herbert works and the Coventry Cathedral ruins.
Lyudmila was elevated to the rank of a major however she did not get back to the warfront and instead started training the Soviet snipers as an instructor till the end of the war.
She was presented with the Gold Star of the Hero of the Soviet Union award, the highest distinction in the Soviet Union in 1943. Her efforts during the war were also recognised that year by issuing a Soviet postage stamp in her honour.
Over the years she had also received several honours and accolades for her war contributions. These included the Order of Lenin twice; Medal "For the Victory over Germany in the Great Patriotic War 1941–1945"; the Medal "For the Defence of Sevastopol"; the Medal "For Battle Merit"; and Medal "For the Defence of Odessa".
Life After the War, Death & Legacy
As the war ended, Lyudmila resumed and completed her studies at the Kiev University and then commenced a career of a historian. She served the Chief Headquarters of the Soviet Navy as a research assistant from 1945 to 1953. Later she got actively involved with the Soviet Committee of the Veterans of War.
This ace sniper who earned international repute for her valour and war contributions passed away on October 10, 1974, at 58 years of age in Moscow, Soviet Union. Her remains were interred in Moscow’s Novodevichye Cemetery.
In 1976, the Soviet Union issued another commemorative stamp featuring her portrait.
American singer-songwriter and one of the most prominent figures in American folk music Woody Guthrie composed a song ("Miss Pavlichenko") commemorating Lyudmila’s war contributions and visits to Canada and the US. The song was included in ‘The Asch Recordings’, presumably the most famous recordings of Guthrie.
The commercially successful biographical war film ‘Battle for Sevastopol’, a joint Russian-Ukrainian production that released in both the nations on April 2, 2015 was based on the life of Lyudmila. The film had its international premiere a couple of weeks later at the Beijing International Film Festival.
In February 2018, Greenhill Books published ‘Lady Death’, the first English language edition of Lyudmila’s memoirs.

See the events in life of Lyudmila Pavlichenko in Chronological Order 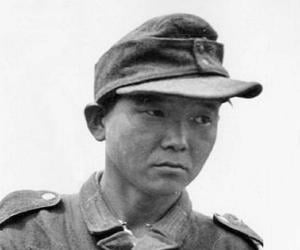