Luis Suarez is the star striker of the Uruguayan national soccer team who went on to play for Ajax and Liverpool before he joined the Spanish giants FC Barcelona. He came into prominence for all the wrong reasons including biting Italian defender, Giorgio Chiellini, during a world cup match in 2014. However, he is still considered to be one of the best strikers in the world and has been the European Top Scorer and winner of the ‘Golden Boot’ award twice. His aggressive nature on the field has been attributed to his harsh upbringing, ridden with poverty, and a broken family where his father walked out leaving his mother to bring up seven siblings. His childhood sweetheart, whom he eventually married, has been his saving grace that had a positive bearing on his life and put him back on track. Today he is one of the highest paid footballers in the world with a net worth estimated at over $ 40 million. 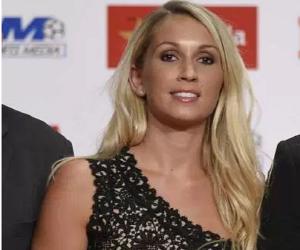 Ruud Gullit
Football Players #15
Sportspersons #67
DID WE MISS SOMEONE?
CLICK HERE AND TELL US
WE'LL MAKE SURE
THEY'RE HERE A.S.A.P
Quick Facts

Uruguayan People
Tall Celebrities
Tall Male Celebrities
Male Sportspersons
Uruguayan Sportspersons
Childhood & Early Life
Luis Alberto Suarez Diaz was born on 24 January 1987 in Salto, Uruguay, to Rodolfo and Sandra Suarez. His father was a porter from a poor mixed background having African ancestors. His family moved to Montevideo for work when Luis was seven years old.
He has seven siblings. His elder brother, Paolo Suarez, is also a professional footballer who played for the National Football League of Guatemala. Their childhood was ridden with poverty and it was difficult to afford even a pair of football boots. However, this did not stop Luis from pursuing the sport which he started playing on the street.
His mother encouraged him by introducing him to Urreta, which was a rich football club in Montevideo. Suarez scored a hat-trick as a substitute in his first friendly match and from there he started rising as a footballer of high promise.
At the age of nine, while playing for Urreta, he was discovered by Wilson Pirez, who was scouting for the Nacional youth team. By the time he was 12, his father walked out on the family and his mother and grandmother had to struggle to bring up the boys. By then, Suarez was working towards a career opening with Nacional.
He was not very bright in academics, nor was he initially keen on becoming a professional footballer. However, his family condition and the requirement to earn something motivated him to take up the sport.
He was in the wrong company as a teen and took to drinking, but things changed when he met Sofia Balbi when he was 15. She was a positive influence on his life and is now his wife.
Continue Reading Below
You May Like

The Most Popular US Veterans
Career
He played his first professional match for Nacional youth club against Copa Libertadores. Though the match ended in a 3-2 defeat, Suarez netted his first senior level goal with an impressive overhead kick. He went on to play for Nacional 34 times and scored 12 goals for them. He was their main striker who helped them lift the 2005- 2006 Uruguayan League.
He made his international debut in football as a member of the Uruguayan team that reached the knock out stage of the 2007, U20 World Cup, played in Canada. They lost to the USA but it was Argentina that won the tournament. The exposure helped Suarez understand the dynamics of international professional football.
After the U20 World Cup, he got offers from Groningen and Ajax football clubs to play professional football. He joint Groningen for a short while and was subsequently picked up by Ajax for 7.5 million Euros. During his five year contract with Ajax, he scored 111 goals in 159 matches for the club and was recognised as the Dutch Footballer of the Year in the very first season.
He was next hired by Liverpool FC for a whopping 22.8 million Euros and became one of their most expensive players in 2011. His brilliance with the ball helped his team win the Champions League and the ‘Golden Boot’ for himself. He was named PFA Players’ Player of the Year and the FWA Footballer of the Year.
Luis wanted to be closer to his wife so he left Liverpool to join Barcelona FC for 75 million Pounds. He is one of their three main strikers with Messi and Neymar. After he became part of the team they registered their second historic win of the prestigious continental treble consisting of the La Liga, Copa dal Rey and UEFA Champions League.
Suarez played a pivotal role in the fourth position finish of Uruguay in the 2010 FIFA World Cup. He also helped his national team to win a record fifteenth Copa America and was named Player of the Tournament in 2011. He captained the national team at the 2012 Olympic Games where he scored a hat-trick against Chile. The year 2013 saw him as the star player of Uruguay in the Confederation Cup where he scored a crucial goal against Spain in their opening game. At the 2014 FIFA World Cup in Brazil, Suarez scored his 40th international goal for his country.
Awards & Achievements
Suarez is still considered one of the best strikers in the world and was the European Top Scorer and winner of the ‘Golden Boot’ award twice in his career. He is the only player since 2009 to win a ‘Golden Boot’ with a Pichihci Trophy in the same year, other than Messi and Ronaldo.
He has the distinction of being in the winning team of the Champions League, Uruguayan League, Dutch League and Spanish League during his career and has received numerous Best Player awards.
Besides being the star striker of his national team, he has played professional football for Nacional (2005-06), Groningen (2006-07), Ajax (2007-11), Liverpool (2010-2014) and Barcelona (2014-2017).
Personal Life & Legacy
His aggression on the field has been attributed to the difficult life he faced while growing up and the type of company he kept till he met the girl he eventually married.
He married his childhood sweetheart, Sofia Balbi, in 2009. They have a son and daughter named Benjamin and Delfina. He has always been very close to his wife who has been his strength and sobering factor.
Trivia
In the 2010 World Cup match against Ghana, he stopped a sure goal against his team with his hand and was sent off the field. However, his team went on to win the match.
He has also been fined for racial abuse, head-butting a referee, making obscene gestures to the crowd and biting another player on the field on three occasions. The Dutch daily newspaper, De Telegraaf, branded him as ‘Cannibal of Ajax’ after his biting incidents.
He has a bad reputation of picking up yellow cards and having to go off the field.
Suarez is famous for his technique of directly running towards the goal and tactfully getting the ball through the opponents legs referred to as nutmegging.
In the course of his career, he has endorsed many sports as well as consumer products including Adidas, Pepsi and Samsung.

See the events in life of Luis Suarez in Chronological Order