Louis Kahn was one of the most revered architects of his time. He worked in various capacities for several architectural firms and founded his own business soon after. Kahn continued practicing as an architect and also became a professor at Yale School of Architecture and at the School of Design in the University of Pennsylvania. Most of his designs were colossal and extremely avant-garde, way ahead of the time in terms of design and styling. He was honored with a number of medals and at the time of his death, Kahn was known to the world as 'America's foremost living architect'. Some of his grandest and most iconic projects include the 'Urban and Traffic Study', 'Yale University Art Gallery', 'The Salk Institute', the 'Indian Institute of Management, Ahmedabad' and the 'Center of Philadelphia'. Charles Rennie ...
Architects #15
DID WE MISS SOMEONE?
CLICK HERE AND TELL US
WE'LL MAKE SURE
THEY'RE HERE A.S.A.P
Quick Facts

American Celebrities
Male Architects
American Architects
Pisces Men
Childhood & Early Life
Louis Isadore Kahn was born as Itze-Leib Schmuilowskyin a poor Jewish family in Parnu, Estonia. He was raised in Kuressaare in Saaremaa, which was then a part of the Livonian Governorate.
In 1906, his family transferred to the United States. Because of their poor financial conditions, they could not even afford pencils. As such, they burned twigs in order to make money through Louis' drawings.
He later played the piano to supplement silent movies in cinemas. He became an established citizen in 1914 and the next year, he adopted the name 'Kahn'.
He studied at the University of Pennsylvania and completed his Bachelor of Architecture in 1924. 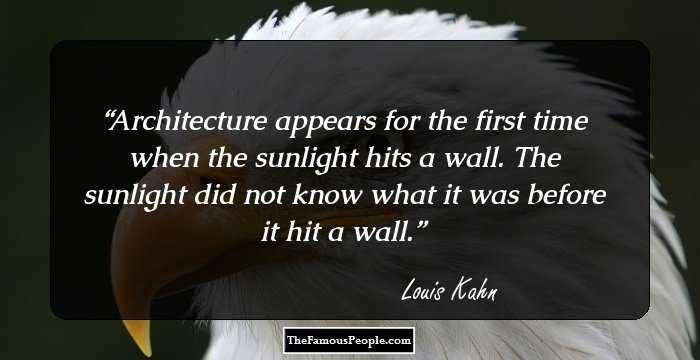 The Most Popular US Veterans
Career
Right after his graduation, he worked as a senior designer in the office of the City Architect, John Molitor.
He toured Europe in the late 20s and by 1929 he returned to the United States and worked in the agencies of Paul Philippe Cret and with Zantzinger, Borie and Medary, in Philadelphia.
He co-founded the Architectural Research Group in 1932 with Dominique Berninger. Among the assignments that he worked on during this period were unbuilt systems for public accommodation that he had presented to the Public Works Administration.
Through the 30s, he worked with George Howe on a number of ventures for the Philadelphia Housing Authority.
In the 40s, he worked together with Oscar Stonorov for the policy of housing enlargements in Philadelphia. He began to teach at Yale University in 1947.
In 1950, he was Architect in Residence at the American Academy in Rome, which is considered to be a high point in his career. After visiting relics in Greece, Egypt and Italy, he assumed a basic approach to architecture. He established his own style as influenced by formercontemporary movements.
From 1951 to 1953, he was busy in his first major commission, which was to design the Yale University Art Gallery in Connecticut. This was his first masterpiece and became one of his most important designs.
In 1956, he was named Albert F. Bernis Professor of Architecture and Planning at the Massachusetts Institute of Technology. The same year, he completed the design for the Richards Medical Research Laboratories at the University of Pennyslvania.
In 1957, he returned to Philadelphia to teach at the University of Pennsylvania, until his death. He was commissioned to design 'The Salk Institute', which was designed in three bunches - laboratories, conference areas and residential quarters.
Continue Reading Below
In 1961, he received a scholarship from the Graham Foundation for Advanced Studies in Fine Arts, so that he could study traffic movement and prepare an overpass system for the same.
Around this time, he was also the visiting professor at Princeton University. He began working on the Jatiyo Sangshad Bhaban, a National Assembly building in Dhaka, Bangladesh, which was completed only in 1974.
Some of his last architectural works include, the 'Phillips Exeter Academy Library', 'Kimbell Art Museum', 'Yale Center for British Art', 'Franklin D. Roosevelt Four Freedoms Park' and his last work, which was completed in 1979, the 'Flora Lamson Hewlett Library'. 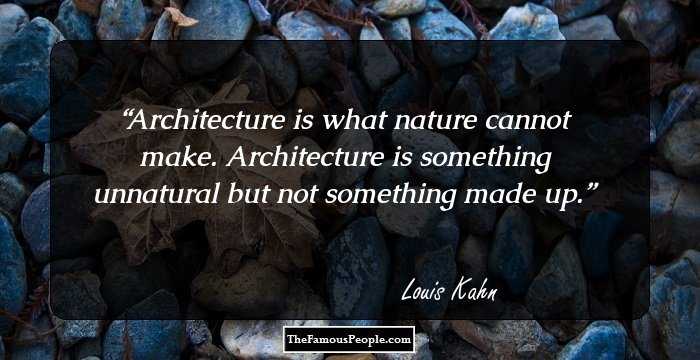 Quotes: Nature
Major Works
The 'Jatiyo Sangshad Bhaban' in Dhaka, Bangladesh, is considered his magnum opus. It took him twelve years to complete this magnificent edifice, starting from 1962 and ending in 1974. It still remains as one of the most important buildings in Bangladesh. Commissioned by Muzharul Islam, he designed this building with the help of his students at Yale University. The building, one of his largest works, includes dining halls, hostels, a hospital and the main Parliament building itself.
Awards & Achievements
He was presented the AIA Gold Medal and the RIBA Gold Medal. 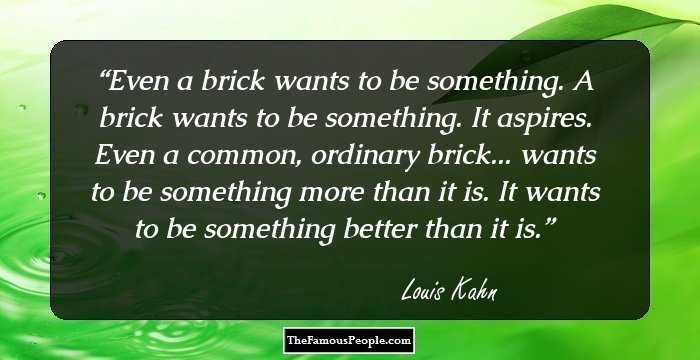 Personal Life & Legacy
He married his first wife, Esther, in 1930 and they had one daughter.
He then had a relationship with Anne Tyng, with whom he was working. The duo has a daughter, Alexandra Tyng.
He also had a son with a woman called Harriet Pattison.
He passed away due to cardiac arrest in a restroom at the Pennsylvania Station in New York. His body remained anonymous for three days because the address given in his passport was struck out. Towards the end of his life, Kahn was in deep debt, despite a long and successful career.
His work went on to influence a number of influential architects such as Muzharul Islam, Robert Venturi, Jack Diamond, Moshe Safdie and Richard Rogers.
A chamber opera called 'Architect' was a personality study on Kahn and his works by Pulitzer-Prize winning composer, Lewis Spratlan. He was also the subject of the documentary 'My Architect' and his family life inspired an episode of the famous series, 'Law & Order: Criminal Intent'.
Trivia
When this renowned American architect was 3-years-old, he was fascinated by the light emitting out from the coal burning in the stove. He put on an apron and put some coal in the apron which caught fire and eventually burnt his face. The scars of these early burns remained on his face.
You May Like

See the events in life of Louis Kahn in Chronological Order