Advanced Search
Lili Estefan is a popular Cuban model and the current host of the American Spanish-language entertainment news show, El Gordo y la Flaca. This beautiful multi-faceted personality is counted amongst the best known faces in the Cuban television industry. Being the niece of the Grammy Award-winning musician and music producer, Emilio Estefan Jr., Lili was exposed to the show business at an early age. Inspired by her uncle, and also by her inherent love for the fine arts, she decided as a young girl to carve a niche for herself in the glamor world. As a step towards pursuing her passion, she attended the New World School of the Arts pilot dual college enrollment program with the Performing and Visual Arts Center in Miami, Florida, USA. Happily enough, her friend, Laurah Guillén, also attended the same course and both the young ladies supported each other in their artistic endeavors. Claudia Sampedro
20th March In History
DID WE MISS SOMEONE?
CLICK HERE AND TELL US
WE'LL MAKE SURE
THEY'RE HERE A.S.A.P
Quick Facts

Cuban People
Cuban Women
Pisces Models
Cuban Models
Female Models
Career
Despite being the niece of a popular celebrity, Lili Estefan had to struggle hard to build a name for herself in show business. The pretty and confident young lady got lucky in 1986 when she was offered a chance by Univision to participate as a model in ‘Sábado Gigante’, a highly popular television show hosted by the Chilean TV star Mario Kreutzberger under the stage name of Don Francisco. She brought a cheery presence and youthful beauty to the show which won the hearts of not just the audience, but the show host himself! People quickly took to the slim and tall model and were captivated by her green eyes and sparkling smile.
After having become the darling of the masses, Lili Estefan wasted no time in exploring other opportunities in modeling and television in addition to ‘Sábado Gigante’. She co-hosted the show for 12 long years before bidding adieu to the program which helped launch her career. Her streak of success continued when she was hired to co-host a celebrity-gossip show, ‘El gordo y la flaca’ for the same network, Univision, in 1998. Along with Raúl De Molina, she has been sharing celebrity gossip and showcasing interviews with singers, actors, and other celebrities since then to entertain audiences. The hugely popular multiple award-winning show has not only taken her career to greater heights, but has also proven to be a very enjoyable experience for her. Along with being a television host, she also presents special events such as beauty pageants and the annual Calle Ocho music festival held in Miami, Florida.
Recommended Lists:

Female TV Anchors
Cuban Female Models
Cuban Media Personalities
Women Media Personalities
Continue Reading Below
Personal Life
Liliana Del Carmen "Lili" Estefan García was born on March 20, 1967 in Cuba into a loving family. She has one brother. Her happy family life was shattered when her mother died when Lili was just ten. Her father, though devastated by the death of his wife, invested all his efforts in ensuring that the children got a good upbringing. When she was 14, Lili, along with her father and brother moved to the USA to live with her uncle and aunt, the popular musician couple—Emilio and Gloria Estefan. Even though the teenager’s initial years in the foreign country were difficult, she eventually adjusted to her new circumstances. With the help of her uncle and aunt who familiarized her with the glam world, Lili too developed an interest in the show business. Eventually she got her big break in 1986, and the rest as they say, is history! Lili Estefan is happily married to Lorenzo Luaces since 1992 and their two children, Lorenzo and Lina, complete the picture-perfect family.
Recommended Lists: 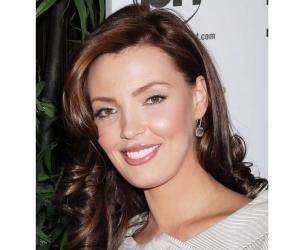