Perhaps no other person in the history of the entertainment industry has traveled so far tirelessly across the globe to entertain service men at war other than Bob Hope. The media named him ‘America's No. 1 Soldier in Greasepaint’ and the US Congress conferred him the title of the ‘first and only honorary veteran of the U.S. armed forces’. He was most noted for his shows that entertained the American military personnel and boosted their morale at time of war. All through the World War II, his radio shows were performed and aired from military bases and combat areas. One of the most recognized talents in the world, Hope performed on Broadway, movies and went on tours with the U.S Military. He was known for his fast wit and great humor. In a career that spanned over 60 years, Hope received over two thousand honors and awards that includes 54 honorary doctorates. He appeared in more than 70 films and hosted the Academy Awards fourteen times. Apart from being the king of all media, Hope was also an ardent golfer a boxer and baseball player. American Celebrities
Singers
Stand-up Comedians
American Men
Gemini Actors
Childhood & Early Life
Leslie Townes Hope was born in Eltham, a district in South East London to William Henry Hope, a sculpture and stone craftsman and Avis Townes, a light opera singer.
In 1908, his family moved to the United States and settled down in Cleveland, Ohio, where he attended the Boys Industrial School.
By the age of 12, he started earning his pocket money by singing, dancing, and performing comedy and he also won a prize for his impersonation of comic legend Charlie Chaplin.
As a teenager, he worked as a lineman and a butcher’s assistant and continued to work until his early twenties, while he simultaneously attended dance classes with his girlfriend, Millie Rosequist.
In 1925, along with girlfriend, Millie Rosequist, he became a part of a touring dance troupe called ‘Hurley's Jolly Follies’.
He founded the comedic dance-and-act group ‘Dancemedians’ with George Byrne and the Hilton Sisters. 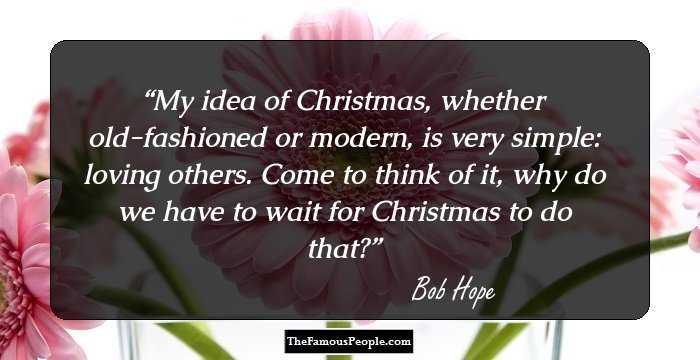 Quotes: Think
Continue Reading Below
Career
In 1933, he played the role of ‘Huckleberry Haines’ in the Broadway show ‘Roberta’ that opened at the New Amsterdam Theater, New York.
In 1934, after he had signed a six year contract with Educational Pictures, New York, he starred in the short comedy film ‘Going Spanish’.
In 1937, he became a part of the regular NBC radio series ‘Woodbury Soap Hour’ after which he starred in the popular radio program ‘The Pepsodent Show’.
In 1938, he moved to Hollywood, after he signed the film ‘The Big Broadcast of 1938’ with Paramount Pictures. The movie featured the song ‘Thanks for the Memory’, a line that became his trademark signature tune later.
He also appeared in movies like ‘Comedy Swing’, ‘Give Me a Sailor’, ‘Thanks for the Memory’, ‘Never Say Die’, ‘Some Like It Hot’ and ‘The Cat and the Canary’.
In 1940, he starred in the box office hit ‘Road to Singapore’, a film that launched his career in the movies.
In 1947, he played the role of ‘Ronnie Jackson’ in the comedy film ‘My Favorite Brunette’, directed by Elliott Nugent.
In 1948, he starred in the Western comedy film ‘The Paleface’, directed by Norman Z. McLeod.
From 1950, he hosted and appeared in many NBC television programmes like ‘The Star-Spangled Revue’, ‘The Bob Hope Show’ and ‘I Love Lucy’.
Continue Reading Below
From 1963 to 1967, he hosted the popular award winning NBC anthology series ‘Bob Hope Presents the Chrysler Theater’.
From 1970 to 1971, he did special Christmas programmes for the NBC network. These programmes were filmed in Vietnam in front of military audiences at the height of the war.
In 1972, he made his last appearance in the movies with the poorly received film ‘Cancel My Reservation’. 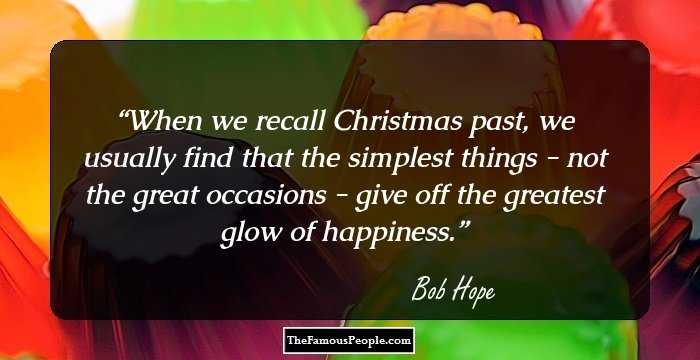 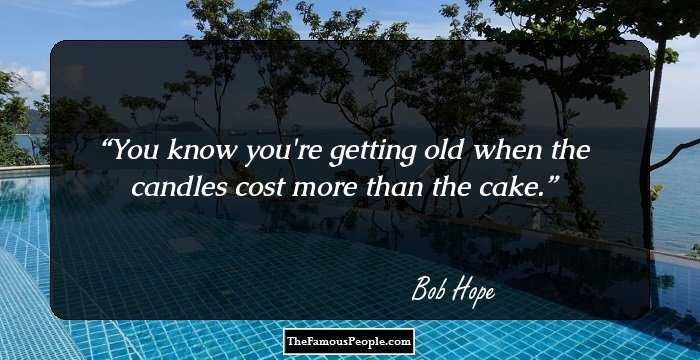 Quotes: You
Personal Life & Legacy
He was a boxer for a brief period, after which he also played golf.
Continue Reading Below
In 1933, he married Grace Louise Troxell, his vaudeville partner and the couple divorced in 1934.
In 1934, he married Dolores Reade and the couple adopted four children. They remained together until his death.
In 2000, he was hospitalized for gastrointestinal bleeding and the following year he suffered from pneumonia.
He was the chairman of ‘Fight For Sight’, a non-profit organization that funds medical research in vision and ophthalmology.
He died at the age of 100 at his home in Toluca Lake, Los Angeles and he was laid to rest at the Memorial Garden at San Fernando Mission Cemetery in Los Angeles.
In 1997, ‘USNS Bob Hope’, the U.S. Military Sealift Command was named in his honor.
The Bob Hope Classic, a professional golf tournament played annually in California was named in his honor.
Trivia
This Academy Award winning American comedian, film and radio personality had the reputation of being a womanizer and had many extra marital affairs.
This Golden Globe and Academy Award winning actor and comedian had an extra marital affair with actress Barbara Payton, whom he had to a pay a huge sum of money in order to end the affair.

See the events in life of Bob Hope in Chronological Order