Lester Bangs was a legendary rock critic, journalist, author and musician, who is best-known for his collection of essays entitled, ‘Psychotic Reactions and Carburetor Dung’. Owing to his prose style, his readers often describe him as humorous, egomaniacal, sardonic and witty individual. He is compared to the likes of legendary personalities such as Dan Clowes and Axl Rose and is known for having led an eventful life, in terms of what he dreamt of achieving and what he actually did achieve. He was one of the most influential critics of rock music and contributed columns to popular magazines like ‘Rolling Stone’ and ‘Creem’. He had very a humble beginning and started off as a freelance writer. However, his career spurted upwards and even though he was known for his transparency and unabashed choice of words, it was his humorous tones that captured the fancy of people and critics alike. He also wrote for magazines, such as, ‘Playboy’, ‘New Musical Express’ and ‘Penthouse’. While he was on a sabbatical, he would pursue a parallel music career and also write essays, as he was a musician and also an author in his own right. Scroll further if you would like to learn more about this illustrious personality. Jordan Belfort
Writers #1407
Musicians #3035
DID WE MISS SOMEONE?
CLICK HERE AND TELL US
WE'LL MAKE SURE
THEY'RE HERE A.S.A.P
Quick Facts

American Celebrities
American Men
California Musicians
Male Writers
Male Musicians
Childhood & Early Life
Lester Bangs was born to Norma Belle and Conway Leslie Bangs, in Escondido, California.
As his mother was an ardent Jehovah’s Witness he had an extremely religious upbringing. His father, who was a truck driver, unfortunately died in a fire mishap when Bangs was very young. 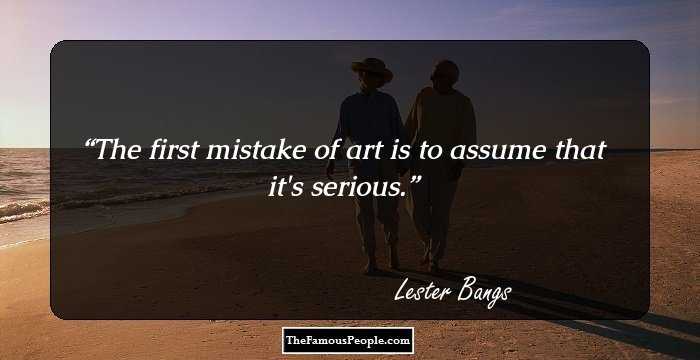 The Hottest Male Celebrities With The Best Abs
Career
Bangs’ career began as a freelance writer in 1969, after he saw an ad in ‘Rolling Stone’ magazine seeking reviews from readers. As his first assignment he wrote a review for an MC5 album titled, ‘Kick out the Jams’. The magazine published the review and he soon, began writing for the magazine on a frequent basis.
He then contributed an essay on Janis Joplin’s accidental death, which earned him the attention of magazine critics and readers. In 1973, he was fired from ‘Rolling Stone’ magazine, prior to which he sent a negative review of ‘Canned Heat’.
He then went on to join ‘Creem’ where he contributed articles and essays and also began to edit for the magazine. However, his prospects in ‘Creem’ seemed dull and he left the magazine to write for numerous other magazines including ‘New Musical Express’, ‘Penthouse’ and ‘Playboy’.
In 1975, he published an essay on his idol, Lou Reed, entitled ‘Let Us Now Praise Famous Death Dwarves’, which put him in the spotlight as a humorous and satirical writer.
During the ‘J. Geils’ concert, he climbed onto the stage while they were performing and wrote a full review of their performances in full view of the audience, on the stage. Not only was this considered bizarre, but critics commended him for his guts and his passion for ‘rock n roll’ music.
Apart from being a rock music critic, he was also a musician in his own right. He recorded an acoustic improvisation in his office, along with ‘Peter Laughner’. He worked on his music for a couple of years and in 1979, he recorded his first solo single, ‘Let it Blurt/Live’, which was released and received to tepid reviews from music aficionados.
In 1980, he traveled to Texas and was introduced to the group, the ‘Delinquents’. He began recording songs with the group and released an album titled ‘Jook Savages on the Brazos’, which became really popular with the masses.
In 1981, he teamed up with Mickey Leigh and their only album together was released in 1986, four years after his death.
In 1990, the British rock band The Mekons released the EP F.U.N. 90, in which Lester Bangs had lent his voice as the lead singer for one of the songs, ‘One Horse Town’. 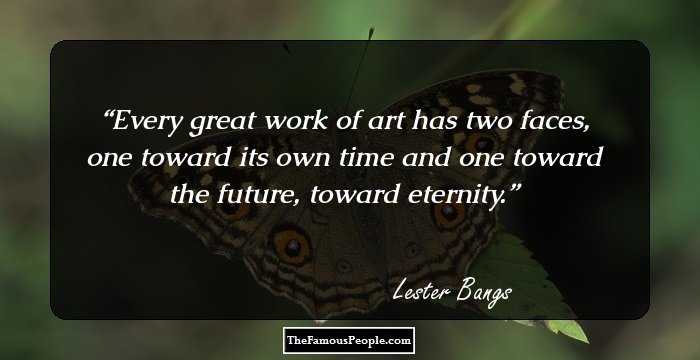 Quotes: Future, Time, Art
Major Works
One of his most famous publications titled, ‘Psychotic Reactions and Carburetor Dung’, is a collection of his essays which was released in 1987, a few years after his death. Not only did this publication document the articles and essays of this famous music critic from the start of his career, but it also provides an insight into his own personal life, the life of his idol, ‘Lou Reed’ and is regarded his magnum opus.
Personal Life & Legacy
He passed away due to an accidental overdose of Valium, NyQuil and Darvon, in New York City.
Following his death, he has been mentioned countless times in songs including ‘It’s the End of the World as We Know It’ and ‘It’s Not My Place’. He is also mentioned in a biography by Legs McNeil titled, ‘Please Kill Me: The Uncensored Oral History of Punk’.
‘Let it Blurt: The Life and Times of Lester Bangs, America’s Greatest Rock Critic’ is a full biography of this great music critic written by Jim Derogatis, published in 2000. 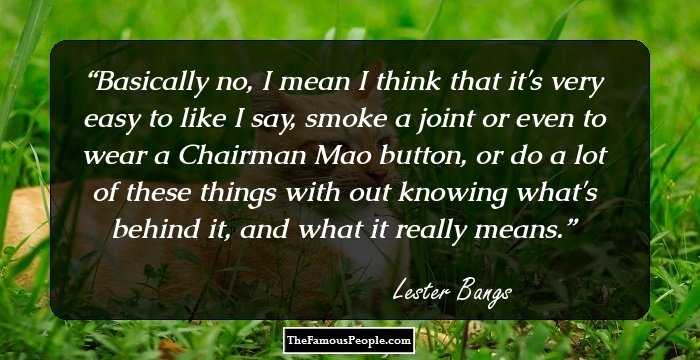 Quotes: Think, Like, I
Trivia
This popular American rock critic was portrayed by Philip Seymour Hoffman in the movie, ‘Almost Famous’, which was released in 2000.
You May Like

Quotes By Lester Bangs | Quote Of The Day | Top 100 Quotes

See the events in life of Lester Bangs in Chronological Order