Satchel Paige was a legendary African-American baseball player. His real name was Leroy Robert Paige and he earned the nickname ‘Satchel’ when he used a pole for carrying additional bags while he worked as a porter in a railway station. As a victim of racism, he had the chance to play for Major League Baseball only for five years and made his appearance only once in the World Cup Series. He was a right-handed pitcher who was known for his fastballs and curveballs. An arm injury made him develop a special pitching style called ‘hesitation pitch’, an experiment that resulted out of aiming for different arm angles. He was the oldest man to have made his debut in the major National League. He made a record as the first Negro pitcher in the American League and the seventh Negro big leaguer overall. His baseball skills, professionalism, accuracy, speed and commitment won him the adulation of fans from around the world. He claimed that he had played 2,500 matches and won nearly 2,000 of them. He was considered a great sportsman who proved that age could never be a barrier for success. Regarding the tireless dispute over his age and skill, he used to quote Mark Twain’s words, "Age is a question of mind over matter. If you don't mind, it doesn't matter." Leroy Robert Page, who later became Leroy Robert Satchel Paige, was born on July 7, 1906, at Mobile, Alabama. He was the seventh of the twelve children born to John Page and Lula Coleman Page.

The family lived in poverty, a fact which he mentioned in his biography, ‘Maybe I'll Pitch Forever’ where he had mentioned, ‘We played in the dirt because we didn’t have toys. We threw rocks. There wasn’t anything else to throw.’

To lend monetary support to his family, Satchel Paige did a number of odd jobs like selling the empty bottles he picked up and as a porter at the Mobile’s Louisville & Nashville’s railway station.

He skipped his classes to play baseball and to fish in Mobile Bay.

Satchel Paige's�pitching skills were chiseled by Edward Byrd while he was under a five year-detention period in the Industrial School for Juvenile Negro Lawbreakers on charges of stealing toy rings from a store. He came out of the school in 1923, six months before the end of his term. 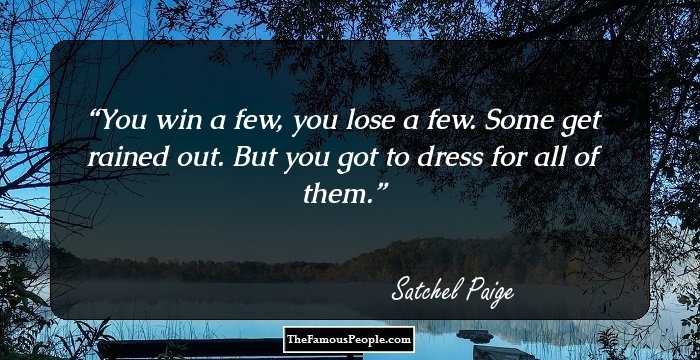 After coming out from the reform school, Satchel Paige started his career as a pitcher for ‘Mobile Tigers’, a semi-professional Negro League, in 1924 and helped his team win thirty games with only one loss.

In 1926, Satchel Paige joined ‘Chattanooga Black Lookouts’, where he played for two seasons. During this period, he became a crowd-puller with his stupendous performance that earned him a high ranking in the Negro League.

Along with other payers, he went for barnstorming and traveled as much as 30,000 miles per year. Despite the racial discrimination that was predominant at the time, his fast and accurate pitching skills wom him a number of white American fans.

The year 1948 marked a grand beginning with his entry into major leagues when Bill Veeck signed him to play for ‘Cleveland Indians’. At the age of 42, Satchel Paige made a record as the oldest rookie to debut in the American League.

In the 1948 World Series, his pitching skill helped the ‘Cleveland Indians’ win the series. After completing the three-month contract with Cleveland Indians, he played for St. Louis Browns for the next three years.
Paige played his last game in the organized baseball in 1966, when he pitched for the Carolina League's Peninsula Grays against Greensboro Patriots.

In 1968, Satchel Paige joined Atlanta Braves as a pitching coach to qualify for the Major League Baseball pension. 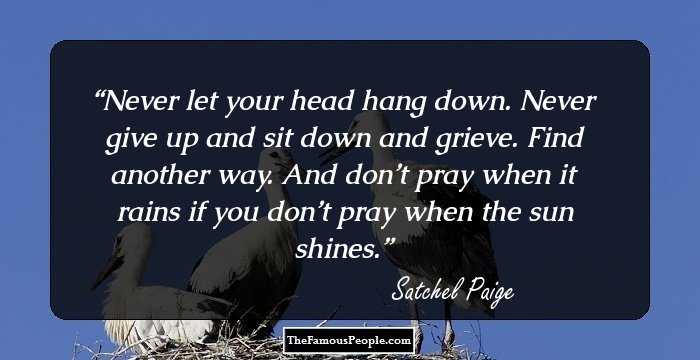 Quotes: You, Never
Continue Reading Below
Awards & Achievements
In 1948, when he made his debut appearance in the World Series for Cleveland Indians, he made a record as the oldest rookie to play for major leagues.
In the years 1952 and 1953, he was named to Major League Baseball’s All-Star Team for the American League.
He was inducted into the National Baseball Hall of Fame in 1971. He was the first African-American to achieve this honor.
Personal Life & Legacy
He married his long-time sweet heart, Janet Howard in October 26, 1934.
He became attracted to Lucy “Luz” Maria Figueroa and married her in 1940. Their marriage became legal only after he was legally separated from his first wife in 1943.
Later, he married his girlfriend Lahoma Brown around 1947. The couple had seven children.
He passed away due to a heart attack in Kansas City, Missouri at the age of 76. He is buried in Forest Hill Memorial Park Cemetery in Kansas City, Missouri.
In his memory, an elementary school in Kansas is named “Satchel Paige Elementary School.”
His statue was unveiled in Cooper Park, Cooperstown, New York in July 28, 2006, as a tribute to all African-American Negro Leagues that contributed to baseball. 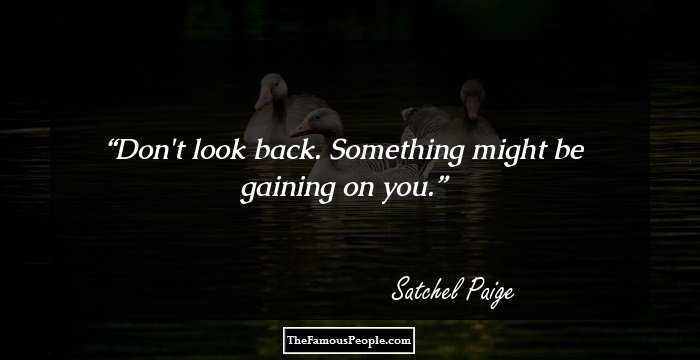 Quotes: You
Trivia
In 1999, he was posthumously nominated as the finalist for the Major League Baseball All-Century Team.

See the events in life of Satchel Paige in Chronological Order