Zaha Hadid was an Iraqi-British architect who became the first Arab woman to receive the prestigious Pritzker Architecture Prize. Known for her highly expressive designs marked by sweeping fluid forms of multiple perspective points, she was considered a pioneer in contemporary avant-garde architecture styles. Internationally renowned for her experimental styles and innovative designs, she was the mastermind behind the designs of the aquatic center for the London 2012 Olympics and the Broad Art Museum in the U.S., among others. Born in Baghdad into a wealthy family, she received a luxurious upbringing and attended boarding schools in England and Switzerland. Even as a young girl there was no doubt in her mind that she would one day pursue a professional career. Intelligent and ambitious, she studied mathematics at the American University of Beirut before moving to London to attend the Architectural Association School of Architecture. She eventually became a British citizen and started her own architecture practice which proved to be very successful. Her innovative designs and experimental styles gained much international notice and within years she established herself as a world renowned architect. She also pursued a teaching career and undertook some high-profile interior work in addition to her architectural career.
Continue Reading Below British Celebrities
American University Of Beirut
Women Architects
British Architects
Scorpio Women
Childhood & Early Life
Zaha Mohammad Hadid was born on 31 October 1950 in Baghdad, Iraq, into an influential family. Her father, Muhammad al-Hajj Husayn Hadid, was an industrialist and the co-founder of the National Democratic Party in Iraq. Her mother, Wajiha al-Sabunji, was an artist.
Hadid’s upbringing by her incredibly successful father highlighted the foundation of her notion that “there was never a question that I would be a professional.”
During her early schooling, she attended a progressive Catholic school. It also included French, Muslim, and Jewish students. She herself came from a Sunni Muslim Arab family.
Her secondary educational career began at the ‘American University’ in Beirut. Her main focus was mathematics.
In 1972, she moved to London to study her strength, architecture, at the ‘Architectural Association’. Here, she met several professors and students that led her to become a partner at the ‘Office for Metropolitan Architecture’, launching her career forward. 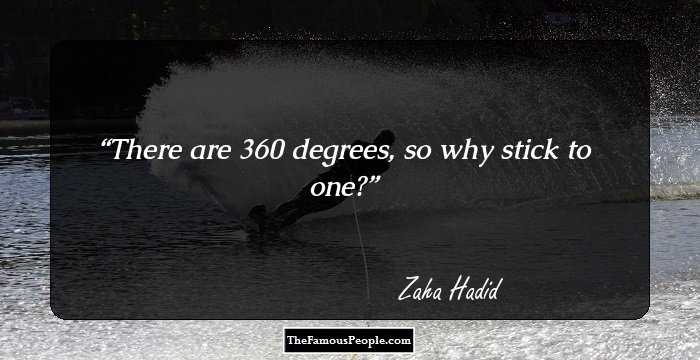 The Sexiest Men Of 2020, Ranked
Career
Her brilliant career had its start in 1977 when she joined the ‘Office of Metropolitan Architecture’ and began teaching at the ‘Architectural Association’.
In 1980, Hadid broke free and began her own practice in London. ‘Zaha Hadid Architects’ employs over 350 people today.
Her first successfully built project was the ‘Vitra Fire Station’ in Weil am Rhein, Germany. The project lasted from 1989 to 1993. The building has since been turned into a museum.
In 1994, her design was chosen for the ‘Cardiff Bay Opera House’ in Wales. This gave her some publicity and fame, but unfortunately the building was not approved to be built as the city chose to spend the money on a stadium instead.
A major success came in 1998 when her design was chosen for the ‘Rosenthal Center for Contemporary Art’. This was her first American project, and was the recipient of two awards, the ‘Royal Institute of British Architects Award’ in 2004 and the ‘American Architecture Award’ from ‘The Chicago Athenaeum’ the next year.
In her career as an educator she held the Sullivan Chair professorship at the University of Illinois at Chicago's School of Architecture in the 1990s. She was also a guest professor at various institutions including the Hochschule für bildende Künste Hamburg (HFBK Hamburg), the Knowlton School of Architecture at Ohio State University, and the Masters Studio at Columbia University.
In 2005, her design was chosen for the ‘Olympic Aquatic Center’ for the ‘2012 Olympic Games’. Currently her designs are set to be built for the ‘Tokyo 2020 Olympic Games’. 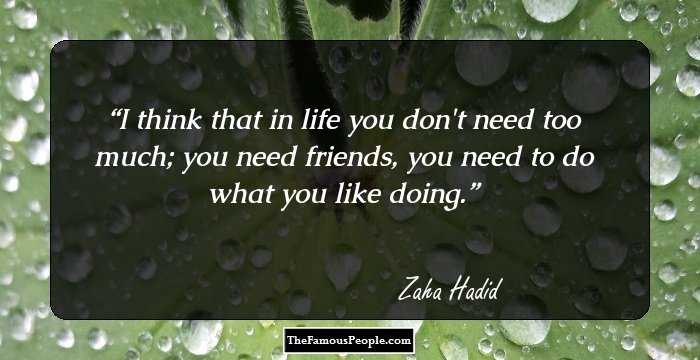 Quotes: You, Life, Think, Friends, Like, Need, I
Major Works
In 2003, she completed the building of the ‘Lois & Richard Rosenthal Center for Contemporary Art’. This was the first American museum designed by a woman and proclaimed the ‘most important American building to be completed since the cold war’ by the New York Times.
In 2010, her Maxxi building design was awarded the Stirling Prize. The national museum is located in Rome and is said to be “a masterpiece fit to sit alongside Rome’s ancient wonders,” (The Guardian)
Awards &Achievements
Hadid’s personal list of achievements numbers over 100 prestigious awards and honors. She received her first award in 1982, the ‘Gold Medal Architectural Design’ for her British Architecture.
In 2004, she became the first woman and one of the youngest recipients of the ‘Pritzker Prize’ for architecture. This award is commonly known throughout the world as architecture’s highest honor.
In 2012, Hadid was given the honor of ‘Dame Commander of the Order of the British Empire’.
In 2014, the Heydar Aliyev Cultural Centre, designed by her, won the Design Museum Design of the Year Award.
Personal Life & Legacy
Hadid never married nor had any children. She was entirely dedicated to her professional career. She broke many social stereotypes to emerge as a role model for Muslim women and opened up opportunities for women as well as Muslims to become architects.
Zaha Hadid died of a heart attack in a Miami hospital on 31 March 2016. At the time of her death she was undergoing treatment for bronchitis.
Trivia
Before her fame as an architect, she had a successful teaching career at several institutions. These included the ‘Harvard Graduate School of Design’ and the ‘University of Illinois’ at ‘Chicago’s School of Architecture’.
You May Like

See the events in life of Zaha Hadid in Chronological Order