Laura Ingraham is an American television host. Also, a New York Times bestselling author, Laura Ingraham is one of the most powerful women in the field of political and cultural commentary. Her nationally syndicated radio talk show ‘The Laura Ingraham Show’ is the most popular show in the country and is aired on hundreds of radio stations. She is one of the most entertaining female hosts whose in-depth knowledge of the administrative system is well appreciated by critics and listeners. An entertaining conversationalist, Ingraham’s feisty talks, witty humor, and energetic personality have attracted a wide range of loyal audience. She is a proficient author and has authored some of the bestselling books in the country, including the New York Times bestseller ‘The Obama Diaries.’ A former legislator, Ingraham was a Supreme Court law clerk and is a graduate from the ‘Virginia School of Law.’ She is also the guest host of ‘The O'Reilly Factor’ on ‘Fox News Channel.’ Apart from politics, she also talks about sensitive topics like feminism, media bias, illegal immigration, and radical Islamic views. Laura Anne Ingraham was born on June 19, 1963, in Glastonbury, Connecticut, U.S., into a humble middle class family. She was raised in the small township of the Glastonbury Center community.

In 1981, she graduated from ‘Glastonbury High School,’ the only high school in the town of Glastonbury, Connecticut.

In 1985, she graduated with a bachelor’s degree from ‘Dartmouth College,’ a private Ivy League university located in Hanover, New Hampshire, United States.

During her senior year at college, she was the editor-in-chief of the conservative newspaper ‘The Dartmouth Review,’ a bi-weekly publication.

In 1991, she obtained a ‘Juris Doctor,’ a professional doctorate in law, from the ‘University of the Virginia School of Law.’ 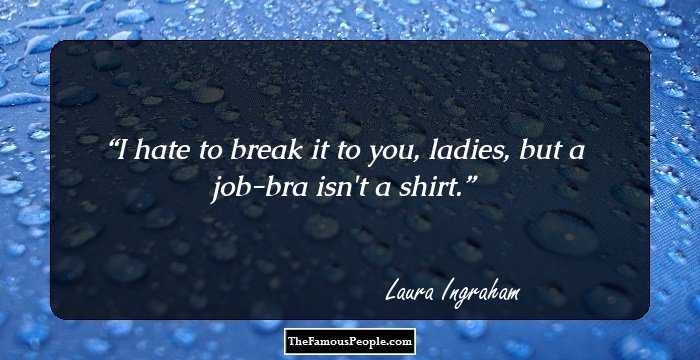 Quotes: You, I
Continue Reading Below
Career
After graduating from law school, she worked as a law clerk under Ralph K. Winter, Jr., a Judge of the U.S. Court of Appeals for the Second Circuit, in New York.

She served as the clerk of The U.S. Supreme Court Justice Clarence Thomas for a brief period after which she worked as an attorney for the New York-based law firm ‘Skadden, Arps, Slate, Meagher & Flom.’

In the late-1980s, she was employed as a speechwriter, during Ronald Reagan’s tenure, in the Domestic Policy advisory. She also worked as the editor of ‘The Prospect,’ a ‘Princeton University’ magazine.

In 1995, she was featured on the cover of ‘The New York Times Magazine’ for which she had written an article on ‘rising young conservatives.’

In 1996, along with Jay Lefkowitz, a Jewish politician and lawyer, she organized the first annual ‘Dark Ages Weekend’ as a response to the ‘New Year’s Renaissance Weekend,’ an American retreat for leaders.

In the late-1990s, she worked as a commentator for the CBS network and also served as the host of a MSNBC network program called ‘Watch It!’

In 1997, she authored an essay for the ‘Washington Post’ where she had written about the need for legal protection for homosexuals.

In June 2000, her book ‘The Hillary Trap: Looking for Power in All the Wrong Places’ was published. The book is an analysis of Hillary Clinton’s policies.

In April 2001, she launched her own show called ‘The Laura Ingraham Show.’ The show was aired on 306 radio stations, including ‘XM Satellite Radio.’

On October 25, 2003, her second book ‘Shut Up & Sing: How Elites from Hollywood, Politics, and the UN Are Subverting America’ was published by ‘Regnery Publishing.’

In 2004, ‘The Laura Ingraham Show’ started airing on the ‘Talk Radio Network,’ a 24-hour radio network.

She is the guest host of ‘The O'Reilly Factor’ on ‘Fox News Channel.’ She is also a weekly contributor to a segment called 'The Ingraham Angle.'

On September 11, 2007, her third book ‘Power to the People’ was published by ‘Regnery Publishing.’ In the book, she stresses on how ordinary people in America can make a difference in politics and culture.

In 2008, she was given a three-week trial run by ‘Fox News Channel’ for their upcoming show ‘Just In with Laura Ingraham.’ The show was canceled after the trial period and was replaced by another show.

Published in 2010, her book ‘The Obama Diaries’ is a fictional account of the diary entries made by Barack Obama.

On July 12, 2011, ‘Of Thee I Zing: America's Cultural Decline from Muffin Tops to Body Shots’ was published.

Laura and businessman Peter Anthony founded a conservative American website called ‘LifeZette’ in 2015. In January 2018, Laura confirmed that she had sold the majority stake of ‘LifeZette’ to ‘The Katz Group.’

She published the book ‘Billionaire at the Barricades’ in 2017. The book explains the 2016 election victory of Donald Trump.

Published in 2007, her third book ‘Power to the People’ earned great critical appreciation and was enlisted on ‘New York Times’ best seller list.

Her 2010 book ‘The Obama Diaries’ peaked at number one on the ‘New York Times’ bestseller list. ‘USA Today’ included the book in its list of ‘bestselling publications.’

Her nationally syndicated radio talk show ‘The Laura Ingraham Show’ is the third-most popular political talk show to be broadcast in the United States. It is heard on hundreds of radio stations across the nation.

She was engaged to Indian American author Dinesh D’Souza, but the engagement was broken off for unknown reasons.

This bestselling author and radio show host was sued for $2.4 million by a music professor for showing him in a bad light in her articles.

See the events in life of Laura Ingraham in Chronological Order