Kim Basinger is an American model turned actress and singer who rose to prominence in the 1970s. With the prestigious Academy Award to her credit, Kim is globally revered for her illustrious body of work for over four decades now. From a Bond girl in ‘Never Say Never Again’ to Elana Lincoln in ‘Fifty Shades Darker’, her performance in a range of characters testifies her finesse as an artist. Kim Basinger’s roots in the film industry traces back to her actress mother who performed in the Esther Williams’s films. Though introvert as a child, and shy as a teenager, Kim Basinger grew into a confident young adult and is known for her stunning looks. After a glamorous modelling stint, she entered Hollywood in the late 70’s. Forty Four plus movies and countless awards later, Kim Basinger is remembered till date, as one of the most fertile artists of her time. 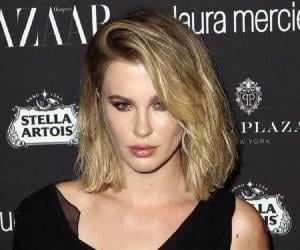 Kim Basinger was born on 8 December 1953, in Athens, Georgia, USA, to Ann Lee and Donald Wade Basinger. Her mother was an actress and swimmer, while her father was a soldier in the US Army. He was also a musician.

Along with her siblings James Michael, Skip, Ashley, and Barbara, she was raised a Methodist.

She is of English, Swedish, German, and Scot-Irish origin. She attributes her good looks to her genes.

An ardent student of ballet, Basinger had a decade long association with the dance form, right from the age of three.

Perceived as an introvert, Basinger averted social interactions in school. In an interview, she recalled how she almost “fainted” when asked to address the class. Her shyness had an enduring impact during her early teens.

Later in her mid-teens, she overcame her shyness and embraced the limelight. After acing the school cheerleading audition, she signed up for ‘America’s Junior Miss Scholarship’ at 17 and ended up winning the crown of ‘Athens Junior Miss.’

At the state level competition, she lost the title of ‘Georgia’s Junior Miss’ to Sue Whitted. Despite the loss, her beauty made heads turn and she was noted by several people throughout the country.

Another significant achievement in her early life was winning the ‘Breck Scholarship’ which enabled her to enter the modeling industry. Her first break was an advertisement for ‘Breck’ where she shared the screen with her mother Ann Lee.

Stuck in a dilemma to choose between modeling, singing, and acting, she initially leaned towards the latter. She chose ‘University of Georgia’ over ‘Ford Modelling Agency.’ However, she soon reversed her decision in favor of ‘Ford.’

‘Ford Modelling Agency’ was one of the earliest agencies she had worked with as a model. In fact, she shifted her base to New York to work full time with them.

During her stint as a model, Kim Basinger was featured as a cover girl for a wide array of magazines. Popularly known as the ‘Breck Shampoo Girl,’ she went on to appear in several advertisements in the 1970s, which made her famous across the United States.

Even with a whopping $1000 per day income, modeling was never her true calling. She would later confess that working in an industry which was obsessed with looks became increasingly difficult.

She also started performing as a singer in ‘Greenwich Village’ clubs. During a particular phase in her life, she had to juggle between her singing career, a promising modeling career, and acting classes. Kim Basinger debuted in television with the hit series ‘Charlie’s Angels’ (1976). In the same year, she moved to Los Angeles to give wings to her Hollywood dreams.

After a few sporadic guest appearances on TV shows like ‘McMillan & Wife’ and ‘Charlie's Angels,’ Basinger got her first big break when she landed a role in the ABC television series 'Dog and Cat' (1977). Her role as ‘Officer J.Z. Kane’ was much appreciated by the audience and producers.

In 1978, she appeared in the made-for-TV movie 'Katie: Portrait of a Centrefold,' in which she played a small-town girl whose ticket to Hollywood lands her in the centrefold of a men's magazine.

While 'From Here to Eternity' (1979) presented her with an opportunity to work with legendary artists like Natalie Wood, William Devane, and Steve Railsback, 'Hard Country' (1981) was critically appreciated. In 1982, she ventured into the adventure genre with 'Mother Lode.'

Meanwhile, her modeling career took a bold turn when she posed nude for the 1981 edition of 'Playboy' magazine.

The success of the Bond movie increased her popularity and she went on to land memorable roles in movies like 'The Natural' (1984). Kim Basinger won a ‘Golden Globe’ nomination for ‘Best Supporting Actress’ for the film.

Tim Burton's ‘Batman’ (1989) was her biggest commercial success. In the film, she impressed the audience with her portrayal of ‘Vicki Vale.’

Over the next six years, she worked on several projects including an animated film titled 'Cool World.' She also took up various singing assignments like 'Shake Your Head.' Around the same time, she also took a break from her career to cherish motherhood.

1997 was a comeback year for Kim Basinger. 'L.A. Confidential' hit the screens with an applauding response from the audience. Starring opposite Russell Crowe and Guy Pearce, her role earned her an ‘Academy Award’ for ‘Best Supporting Actress.’ It also earned her ‘Golden Globe Award’ and the ‘Screen Actors Guild Award.’

In 2017, Kim Basinger was back in limelight with the movie ‘Fifty Shades Darker’ where she played ‘Elena Lincoln.’ Her portrayal of a negative character was well received by the audience. She reprised the role in the movie’s sequel ‘Fifty Shades Freed’ in the following year.

L.A Confidential’ stands out as one of her best works in her long career. Loosely based on James Ellroy’s novel, the movie is a quintessential neo-noir crime film that revolves around LAPD officers of 1953. The movie won her an ‘Academy Award’ in 1998.

In 2010, she won ‘The Movies for Grown Ups Award’ under the ‘Best Supporting Actress’ category for ‘The Burning Plain.’

For her invaluable contribution to cinematic art and her lifetime association with films, she received the ‘Athena Award’ at the ‘Kudzu Film Festival.’ She was also honored with a star in the ‘Hollywood Walk of Fame.’

At the age of 26, Kim Basinger met makeup artist Ron Snyder Britton on the sets of ‘Hard Country.’ The couple tied the knot in 1980 after a year of courtship.

Following episodes of intense agoraphobia and alleged extra marital affairs with co-stars and musicians (Richard Gere and Prince), the couple called it quits in 1988. Around the same time, Kim also fell for the producer of ‘Batman’ Jon Peters. Kim and Ron got divorced the following year in 1989.

Kim Basinger married co-star Alec Baldwin in 1993. They met while filming ‘The Marrying Man’ in 1990. The couple was blessed with a daughter on 23 October 1995. They named her Ireland Eliesse Baldwin. They separated in 2000 and got divorced in 2002, after a bitter custody battle over their daughter Ireland.

Kim Basinger faced severe financial crisis when her plan of converting a $20 million worth land into a tourist destination fell apart.

After backing out of the controversial movie ‘Boxing Helena,’ she was charged with a penalty of $8.1 million. She finally had to pay $3.8 million after declaring bankruptcy in a higher court.

A vegetarian, Kim Basinger is an ardent supporter of animal rights.

Trivia
As a singer, Kim Basinger performed under the stage name Chelsea.

She was included in the ‘Empire’ magazine’s list of ‘100 Sexiest Stars in the history of films.’

After her first marriage, she suffered from a severe episode of agoraphobia that kept her homebound for more than six months.

See the events in life of Kim Basinger in Chronological Order