Rupert Murdoch is a famous Australian businessman who is known for his establishment 'News Corporation'. After his father’s death, he started by acquiring small, struggling publications in Australia. The first foreign investment happened when he bought 'The Dominion', a New Zealand-based newspaper. Since then, he has gradually built his business empire, and has become a renowned name in the media industry. He boasts of having gained acquisition of publications including 'News of the World', 'The Sun', 'The Daily Telegraph', 'New York Post', and 'HarperCollins'. He has also launched new tabloids under his own banner, like 'The Australian'. With increasing business takeovers in the US, he opted to become a US citizen. Once he had a strong hold over print media businesses in the UK and the US, he moved on to purchase 'Twentieth Century Fox'. 'Fox Network' and 'Fox Studios' are popular production houses affiliated to '20th Century Fox'. This tycoon has also had his share of controversies, but has managed to sail through. Presently most of the operations are managed by his younger son, James. According to Forbes, he is one the richest and the most influential Americans in US and the world. To know more about his life and works read on. Julian Assange
DID WE MISS SOMEONE?
CLICK HERE AND TELL US
WE'LL MAKE SURE
THEY'RE HERE A.S.A.P
Quick Facts

American People
Australian People
Investors
Publishers
American Men
Australian Men
Childhood & Early Life
Keith Rupert Murdoch was born to journalist Keith, and his philanthropist wife, Elisabeth Joy Greene, in Melbourne, on March 11, 1931.
As a young boy, he pursued his education from the ‘Geelong Grammar School’, in Australia. There, he acted as the editor for various school journals including 'The Corian', and 'If Revived'.
Rupert held a part-time job at the 'Melbourne Herald', and was taught the nuances of the profession by his father.
He went on to continue his studies from the 'Worcester College', belonging to the 'University of Oxford', England. Even in college he was the head of the 'Oxford Student Publications Limited'.
After earning his master's degree from college, he was employed with the 'Daily Express' for a brief period of time. 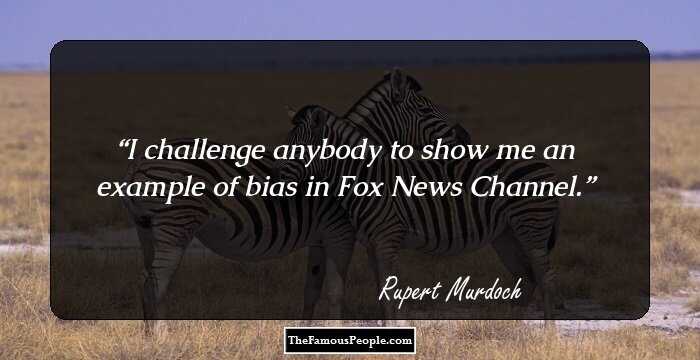 Continue Reading Below
Career
When Sir Keith died in 1952, the young Murdoch came back home, and took over 'News Limited', a media company established by his father. One of its newspapers, 'Adelaide News' became one of the most-read, after the young man took ownership.
From 1956-60, this businessman turned his attention towards acquiring news firms from other media companies, and managed to buy ‘Sunday Times’ in Perth, Western Australia and ‘The Daily Mirror’. He had also managed to increase his stake hold over media firms all across Australia.
In 1964, Rupert got to know of a bid going on for acquiring the Wellington-based newspaper, 'The Dominion', on a trip to New Zealand. The other contender for the acquisition was the powerful Canadian business magnate, Lord Thomson of Fleet. However, it was the thirty-three year old Murdoch who eventually gained control of the 'The Dominion'.
Later that year, he introduced 'The Australian', the nation's first daily, which had its initial operations in Canberra, before shifting base to Sydney.
In 1968, the Australian media tycoon ventured into the British market, and took over 'News of the World', following it up the next year with 'The Sun'. They were initially in the long broadsheet size, but were later shortened to a tabloid format, and were printed in the same press to cut down on costs.
From 1972-76, Rupert purchased the papers, 'The Daily Telegraph', 'San Antonio Express-News', and the 'New York Post', in the meantime launching a new tabloid called 'Star'.
In 1979, the business magnate founded 'News Corporation', as a shareholder to his already-established firm, 'News Limited'. He also began serving as the Chairman of 'News Corp.', which was a firm based out of New York City.
His newspapers were known for their political views, which were initially in favour of Margaret Thatcher, and then shifted to Tony Blair's 'Labour Party', later supporting the 'Conservative Party', led by David Cameron.
In 1981, Murdoch took over a few other publications, including the famous British newspaper, 'The Times'.
Continue Reading Below
Within 1985, 'News Corporation' had gained control of 'Twentieth Century Fox', and the media baron became a US citizen, in order to keep purchasing companies in America.
In 1986, this businessman came under scrutiny, when he introduced electronic publishing in the Wapping area of London. These processes did not require as much manpower as before, and this resulted in downsizing. The existing employees protested, and the dispute had to be settled with a compensation of 60 million pounds.
In the next three years, he acquired the 'The Herald and Weekly Times Ltd.' and 'HarperCollins'.
In 1990, he launched a telecommunications firm in Britain, called the 'BSkyB', and also began eyeing the Asian media market. The same year, 'News Corp.' had incurred losses to such an extent, that the businessman was forced to sell its shares to other companies.
Three years later, 'News Corporation' took over the charge of telecasting the 'National Football League' ('NFL'), from competitors 'CBS'. The same year, in 1993, Rupert gained acquisition of a Hong Kong-based network, 'Star TV', which distributed news and other programmes to Asian countries including India and Japan.
In 1995, the influential entrepreneur faced another controversy when he was accused of illegally holding power over 'Fox Network'. This allegation was soon ruled out by the 'Federal Communications Commission' ('FCC'), who said that his control was beneficial for the network.
The same year, he declared his decision to begin a news website called 'The Weekly Standard', along with a magazine of the same name, in association with 'MCI Communications'. The 'Foxtel' network was also introduced in Australia, by 'News Corp.' in collaboration with 'Telstra'.
From 1996-98, Murdoch took several significant business decisions, including the launch of an all-day 'Fox News Channel'. He also offered 625 million pounds to purchase 'Manchester United' football club, which was turned down, despite the hefty amount.
In 1999, he bought the Australian music company, 'Mushroom Records', and integrated it with 'Festival Records' to launch the 'Festival Mushroom Records'.
Continue Reading Below
Within the next year, 'News Corp.' had become such a large entity that it claimed to have a net worth of more than 5 billion dollars, and ownership of 800 other firms all across the globe.
During 2003-05, the business magnate took over 'Hughes Electronics', that owned 'DirecTV', a satellite television network. He also acquired 'Intermix Media Inc.', which had ownership of websites like 'Imagine Games Network' and 'Myspace'.
In 2010, he donated 1 million dollars each to the organizations, 'U.S. Chamber of Commerce' and 'Republican Governors Association'. The same year, he was also a member of the 'Council on Foreign Relations', and the 'Cato Institute'.
The next year, in 2011, Murdoch faced criticism for the third time, in this instance for allegedly tapping cell phones of distinguished personalities, in order to make news. This led to a string of investigations conducted by the FBI, and the business baron had to step down from the position of director of the publication, 'News International'.
In 2014, '21st Century Fox' attempted to buy over 'Time Warner', but the offer was rejected.
Presently, the management of most companies under Murdoch is looked after by his younger son, James. 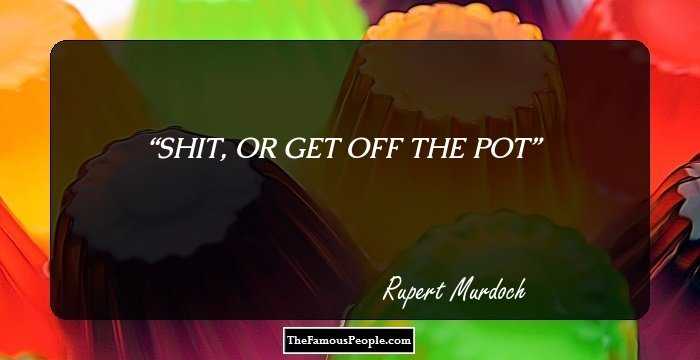 Major Works
Murdoch as a businessman has acquired several large companies, but his most significant business decision was to establish the ‘News Corporation’. Under the banner, he has been able to gain access to other big names in the media industry. Within twenty years of existence, the firm accumulated wealth of $5 million.
Awards & Achievements
In 1984, Rupert was honoured with the 'Companion of the Order of Australia', by the nation's government.
In 2013, he has featured on the 'Forbes List' of richest Americans, in the US, as well as in the world. 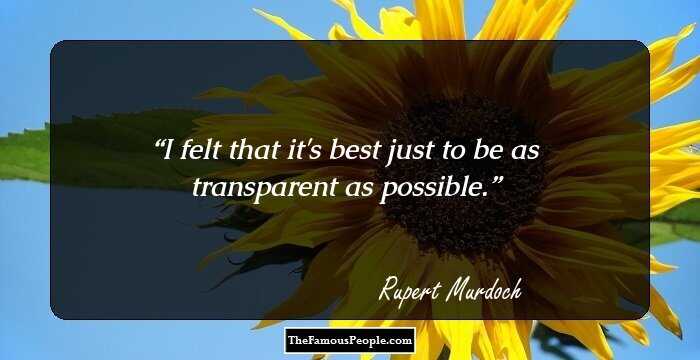 Personal Life & Legacy
From 1956-67, Murdoch was married to former air hostess, Patricia Booer, with who he had a daughter, Prudence.
After separating from his first wife, he married Scottish journalist, Anna Maria Torv in 1967. The couple had three children Elisabeth, Lachlan, and James, all of who are presently influential entrepreneurs. The couple got divorced after 32 years.
Following the separation, he married businesswoman Wendi Deng--the couple have two daughters, Grace and Chloe.
This business magnate has often been the source of inspiration for various TV show characters. Comedian Barry Humphries played this stalwart in the documentary series, 'Selling Hitler'. His character has also been essayed by English actor Hugh Laurie, in the TV program 'A Bit of Fry & Laurie'.
Even Rupert's business scandals have been the subject of the movie, 'Outfoxed', and the TV show, 'Hacks'.
Trivia
This famous businessman was a good friend of Prime Minister of the United Kingdom, Tony Blair. However, he cut off all ties on suspicions of his former wife having an affair with Blair
Recommended Lists:
Media Personalities #732

Quotes By Rupert Murdoch | Quote Of The Day | Top 100 Quotes

See the events in life of Rupert Murdoch in Chronological Order 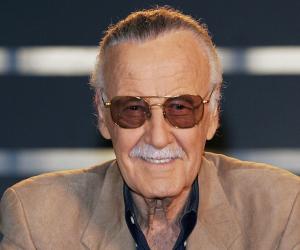