Advanced Search
Katie Price is an English media personality, reality TV star, author, former glamour model, singer and businesswoman. A self-made pop culture phenomenon, she shot to fame as a topless model known as "Jordan". Eventually, she began to use her own name. She was the most successful page three girl featured in the tabloid The Sun. Her extensive plastic surgery brought her a lot of modeling, hosting and reality TV jobs. As a business woman, she has proved to be very savv; a marketing and self-promoting genius, she built her own multimillion-dollar empire based on sales of her ghostwritten autobiographies and novels, her multiple reality shows, and her lucrative fashion and beauty merchandising lines. Thrice married, her personal life leaves much to be desired. She was criticized by many for putting her children in the spotlight, specifically her eldest son, Harvey, who had physical, emotional and mental challenges, but many supported her for bringing attention to special needs children. An icon to many and an embarrassment to others, this buxom model sharply divided feminist critics. Doubtlessly, it is her ability to reinvent herself from being a super glamour model, to advertisement model, to host of television shows, singer, writer of books and successful entrepreneur selling branded perfumes, that keeps her in the media eye. British People
British Women
Gemini Models
Female Models
Briton Models
Childhood & Early Life
Katie Price was born as Katrina Amy Alexandria Alexis Infield on 22 May 1978, in Brighton, East Sussex, southeast England, to Amy and Ray Infield .At the age of four, her father left the family.
In 1988, her mother married builder Paul Price and she acquired the surname Price. She has an elder brother named Daniel and a younger maternal half-sister Sophie from two of her mother's other marriages.
She did her schooling from Blatchington Mill School, She was not good in academics but excelled at sports. She was a good swimmer and was also interested in horse-riding.
She began modeling as a child. At the age of 13, she modeled for a clothing line whose photographer was a convicted pedophile, a fact she was ignorant of, and insisted on shooting her in her underwear. 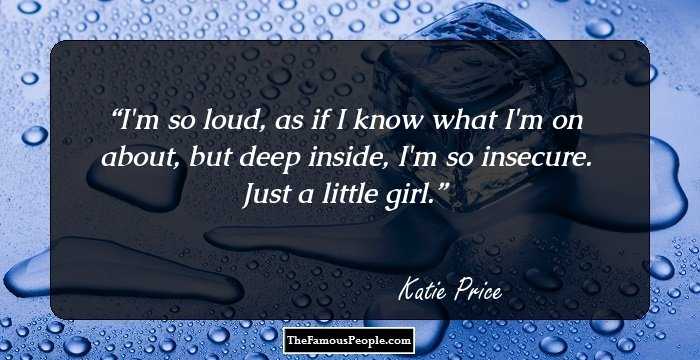 Quotes: I
Continue Reading Below
Career
Price left school at 16, in 1994, and decided to pursue a modeling career. As suggested by a friend, she had her professional photographs taken and sent them to a modeling agency in London.
In 1996, she was offered a job as a topless female glamour model in the page three of the British tabloid newspaper The Sun. She also adopted the pseudonym Jordan.
Despite her family's objections, she had the first in a succession of breast enhancement surgery in1997, hoping that it would make her look as womanly and sexy as other models.
She underwent liposuction on her hips and thighs, and had her lips and nose jobs done. As a result, she was barred from modeling for The Sun in keeping with its all natural policy.
She regularly appeared as Jordan in the Daily Star, FHM, the British edition of Playboy, Nuts, Maxim, Loaded, Vogue and Esquire. Presently, she does not do glamour modeling or use the name Jordan.
As a candidate in Stretford and Urmston parliamentary constituency in the 2001British General Elections, her slogan was, “For a Bigger and Betta Future"; she promised free breast implants, more nudist beaches, and won1.8% of the votes cast.
Between 2004 and 2012, she appeared in many television dramas and shows such as ‘Dream Team’ and ‘Footballers' Wives’, ‘The Big Breakfast’, and ‘The Friday Night Project.’
Starting with her first autobiography, ‘Being Jordan’, in 2004, she penned three more, namely, ‘A Whole New World’, ‘Pushed to the Limit’ and ‘You Only Live Once’ and published them at the interval of two years each.
Between 2006 and 2010, She got her ghost written novels published, such as ‘Angel’, ‘Crystal’, ‘Angel Uncovered’. ‘Sapphire Paradise’
Continue Reading Below
In 2006, she launched The Katie Price Lingerie Collection in conjunction with Panache. Her perfumes, Stunning, Besotted' and Precious Love as well as Jordan' hair care electrical range, are quite popular
In 2008, she signed a deal with Derby House to launch her equestrian range of clothing named 'KP Equestrian'.
In 2015, Katie Price participated in the British television reality game show 'Celebrity Big Brother' and went on to win the show.
Awards & Achievements
In 2004, Price won the Loaded Award for Cover Girl of the Decade.
In 2007, she was presented with the Grattan Award for Celebrity Mum of the Year.
The British Book Awards twice nominated her, the first for ‘Being Jordan’, in 2005 and a second time for ‘My Pony Care Book’.
Personal Life & Legacy
She has had several brief relationships with celebrities and sports stars including footballers Teddy Sheringham, Dwight Yorke, singer Gareth Gates, Warren Furman with Dane Bowers of the boy band Another Level.
She has married thrice. Her first marriage was to Australian singer, songwriter Peter Andre in 2005. The marriage lasted till 2009. The couple had a son, Junior Savva Andreas Andre, born in 2005 and a daughter Princess Tiaamii Crystal Esther Andre, born in 2007.
On 2 February 2010, she married actor Alex Reid. The marriage lasted barely a year and they separated in January 2011.
In April 2012, she got engaged to Argentine model Leandro Penna but they ended their engagement in October 2012.
On 16 January 2013, she married builder and part-time stripper Kieran Hayler. The couple has two children together; a son named Jett Riviera Hayler in 2013 and a daughter named Bunny Hayler in 2014. In August 2017, the couple announced their decision to divorce after it was proved that Hayler was cheating on her.
Apart from her four children from two marriages, she also has another child. In May 2002, she gave birth to a son Harvey Price. His father is former footballer Dwight Yorke.
Trivia
This former English glamour model and media personality ranked #2 in a list of the "100 Worst Britons We Love to Hate" voted by viewers of television network Channel 4.
Recommended Lists:
Fashion #191

See the events in life of Katie Price in Chronological Order