Kathryn Hahn is an actress and comedian best known for her role as Lily Lebowski in the NBC crime drama series Crossing Jordan. Interested in acting from an early age, she studied theater in college before beginning her career. She began her career as a stage actress and appeared in numerous popular productions, thus becoming a known face in the regional theater scene. Her work on the stage garnered her wider attention and she got noticed by an NBC casting director. Her TV debut proved to be successful and before long, she was able to get numerous well-paying gigs. After establishing herself on both the stage and TV, she boldly ventured into the world of cinema as well. She found much success as a supporting actress in movies and eventually received her first leading role in the comedy-drama film Afternoon Delight. In the ensuing years, she co-starred alongside many A-listers, such as Jennifer Aniston and George Clooney. More recently, she has been focusing on TV again and has appeared in numerous comedy and drama series. She is married to actor Ethan Sandler and has two children with him. She is a fitness aficionado and practices yoga in her free time. 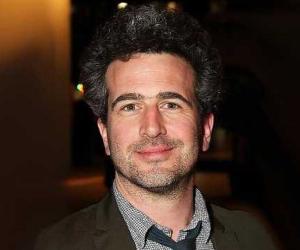 Kathryn Marie Hahn was born on July 23, 1973, in Westchester, Illinois, the United States, to Karen (née Bunker) and Bill Hahn. She was raised Catholic and attended Catholic schools as a young girl. She is of mixed German, Irish, and English ancestry.

While studying at St. Ann's Catholic school in Cleveland Heights and Beaumont School, she developed a love for theater. She decided to pursue her passion and studied theater at Northwestern University, obtaining a bachelor’s degree.

She then went to Yale University, from where she earned her MFA in drama. During this time, she became extremely active in theater and appeared as Sally Bowles in the play Cabaret and as Celimene in Molière's play The Misanthrope.

Kathryn Hahn began her professional career as a stage actress and starred in the Huntington Theater Company's production of Jon Robin Baitz's Ten Unknowns in 2001.

She was discovered by an NBC casting director at the Williamstown Theater Festival and introduced to TV producer Tim Kring. She impressed Kring and he created the character of Lily Lebowski in the TV series Crossing Jordan specifically for her.

She starred in Crossing Jordan from 2001 to 2007. Her character was much loved by the audience and industry experts alike, and she began receiving numerous acting offers.

Kathryn Hahn clinched a supporting role in the romantic comedy film How to Lose a Guy in 10 Days in 2003. Her co-stars were Kate Hudson and Matthew McConaughey.

In the following year, she acted in several movies, including the romantic comedy film Win a Date with Tad Hamilton! and the satirical comedy film Anchorman: The Legend of Ron Burgundy.

The ensuing years saw the talented actress sharing screen time with Ashton Kutcher and Amanda Peet in the romantic comedy-drama A Lot like Love (2005) and with Kate Winslet and Cameron Diaz in The Holiday (2006). She acted in Step Brothers and Revolutionary Road in 2008.

Already an acclaimed name in regional theater, she made her Broadway debut in 2008 with a role in the revival of the French farce Boeing-Boeing. The drama was a major hit.

She continued appearing on TV as well and starred alongside Hank Azaria in the NBC comedy series Free Agents in 2011. She also played recurring roles in the HBO shows Hung and Girls in this period.

She took up the recurring role of Jennifer Barkley in the NBC comedy series Parks and Recreation from 2012 to 2015. She received much appreciation for her performance and was nominated for a Critics' Choice Television Award.

After playing supporting roles in films for many years, Kathryn Hahn finally bagged her first leading role in the comedy-drama film Afternoon Delight in 2013. She was nominated for the Gotham Independent Film Award for Breakthrough Actor.

In 2014, she co-starred alongside Jason Bateman in the comedy film Bad Words. The same year, she also appeared in the comedy-drama films This Is Where I Leave You and She's Funny That Way.

She played the character of Lee Payne in the Showtime comedy-drama Happyish in 2015. The show didn’t do well and was cancelled after one season. The same year, she co-starred alongside George Clooney in the science-fiction adventure film Tomorrowland.

She co-starred with Viggo Mortensen in the drama film Captain Fantastic in 2016. Soon after, she appeared in the comedy film Bad Moms alongside Mila Kunis, Kristen Bell, Christina Applegate, and Jada Pinkett Smith. This film was a major hit and spawned a sequel titled A Bad Moms Christmas.

In 2016-17, she starred in the Amazon Prime Video comedy series I Love Dick. The series was based on the novel of the same name by Chris Kraus. Hahn was also the executive producer. In 2017, she also made a guest appearance in the sitcom Great News.

After starring in the drama film Private Life in 2018, the actress turned her attention more towards the TV. She produced and starred in the HBO comedy miniseries Mrs. Fletcher in 2019 and acted in the HBO drama miniseries I Know This Much Is True in 2020

She joined the Marvel Cinematic Universe in 2021 and starred in the Disney+ limited series WandaVision as Agatha. The same year, she also appeared in the miniseries The Shrink Next Door.

Kathryn Hahn played Rachel Biegler in the comedy-drama film Private Life in 2018. The film revolves around a middle-aged couple desperately trying to have a child. Hahn was praised for her poignant performance as a woman desperate to get pregnant.

Her performance as Agatha Harkness, a scheming witch who pretends to be a friendly neighbour, in the TV miniseries WandaVision was much appreciated. She received numerous awards and nominations for this role.

She is artistically inclined and loves to paint as a hobby. She also enjoys practicing yoga.

See the events in life of Kathryn Hahn in Chronological Order