Advanced Search
A legendary figure in the world of entertainment, Julie Andrews is a dynamic and talented actor. A ‘Golden Globe’ and ‘Academy Award’ winning star, Andrews enjoyed success on Broadway, London theatres, award-winning films, and television shows. She has also recorded albums and is an acclaimed children’s book author. She is the recipient of the prestigious ‘Kennedy Center Honors.’ Furthermore, Queen Elizabeth II bestowed upon her the title of ‘Dame.’ She is also the Goodwill Ambassador for the United Nations’ ‘UNIFEM’ program. She is best known for her role in the ‘Walt Disney’ blockbuster ‘Mary Poppins.’ Some of her other films include ‘The Sound of Music,’ 'Thoroughly Modern Millie,' 'Victor/Victoria,' ‘The Princess Diaries,’ and ‘The Princess Diaries 2: Royal Engagement.’ Some of her notable television works include ‘The Julie Andrews Hour,’ ‘The Julie Andrews Show,’ and ‘Julie.’ Her autobiography ‘Home: A Memoir of My Early Years’ was a ‘New York Times’ Best Seller. Equipped with a fighter’s spirit, she sailed through numerous setbacks to establish herself as a successful and popular performer in the entertainment industry. British People
British Women
Libra Actresses
British Actresses
Actresses Who Are In Their 80s
Childhood & Early Life
Julia Elizabeth Wells was born on 1 October 1935, in Walton-on-Thames, Surrey, England, to Barbara Ward Wells. She was born from her mother’s affair with a family friend. Her mother later married Edward Charles Ted Wells.
Ted Wells and Barbara got divorced and she married singer Ted Andrews. The family struggled financially and lived in the slum. When her parents achieved success in their stage career, they relocated to a better place.
Her stepfather sponsored her education. She studied at ‘Cone-Ripman School,’ London. She was also taught by Madame Lilian Stiles-Allen, a concert soprano and voice instructor. She later continued her education at ‘Woodbrook School.’ 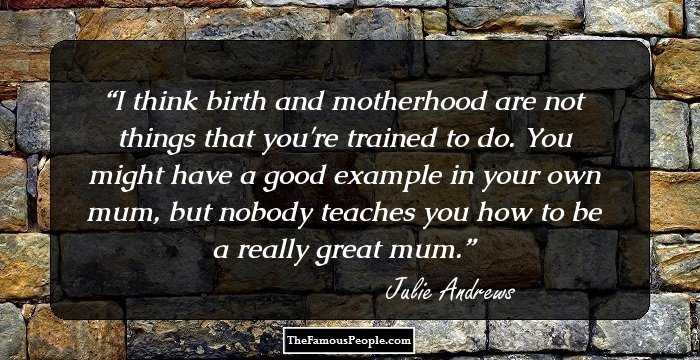 Quotes: You, Think
Continue Reading Below
Career
From 1945, she performed on stage with her parents for two years. On certain occasions, she performed solo or sang duet with her stepfather, while her mother played the piano.
Her stepfather introduced her to theatrical impresario Val Parnell in order to get her a big break. On October 22, 1947, she made her solo debut with the musical revue ‘Starlight Roof’ in which she sang 'Je suis Titania' at the London ‘Hippodrome.’
On November 1, 1948, she performed at the ‘London Palladium’ in the ‘Royal Command Variety Performance.’ She was the youngest solo performer to perform for King George VI's family.
She performed in the musical interlude of the comedy show ‘Up the Pole.’ On October 8, 1949, she made her debut on television with a ‘BBC’ program titled ‘RadiOlympia Showtime.’
From 1950 to 1952, she was cast as a member of the ‘BBC’ radio comedy show, 'Educating Archie.’ The show earned her recognition all over the United Kingdom.
On September 30, 1954, she made her Broadway debut with the London musical, ‘The Boy Friend.’ In the musical, she played ‘Polly Browne,’ a role which earned her acclaim as the stand-out performer.
In 1955, she signed to work in the TV film ‘High Tor.’ The following year, she played ‘Eliza Doolittle’ in the Broadway musical production of ‘My Fair Lady.’ Her performance earned her a ‘Tony Award’ nomination.
On March 31, 1957, she starred in the ‘CBS’ television musical ‘Cinderella,’ which was written by Rodgers and Hammerstein. She earned an ‘Emmy Award’ nomination for her performance.
In 1960, she was cast as ‘Queen Guinevere’ in the Broadway period musical ‘Camelot,’ which opened at the ‘Majestic Theatre,’ Manhattan. The show produced 873 performances.
Continue Reading Below
From 1958 to 1962, she made appearances in a number of TV shows, including 'The Broadway of Lerner & Loewe,' 'The Fabulous Fifties,' and ‘The Ed Sullivan Show.'
In 1962, she co-starred with actor Carol Burnett on the Emmy Award-winning American TV musical comedy show, ‘Julie and Carol at Carnegie Hall.’
In 1964, she delivered an Academy Award-winning performance in the musical film ‘Mary Poppins,’ which was directed by Robert Stevenson. Walt Disney chose her for the role after watching her in ‘Camelot.’
In 1964, she also starred in the American comedy-drama war film ‘The Americanization of Emily,’ which was directed by Arthur Hiller. The film was an adaptation of William Bradford Huie’s novel of the same name.
In 1965, she starred in the musical film ‘The Sound of Music’ which was directed by Robert Wise. The film was inspired by a Broadway musical of the same name.
She was a guest star on ‘The Andy Williams Show,’ and also hosted ‘The Julie Andrews Show.’ In 1966, she starred in the award-winning film ‘Hawaii.’ The same year, she was also seen in the Alfred Hitchcock film ‘Torn Curtain.’
In 1967, she earned a ‘Golden Globe’ nomination for her role as ‘Millie Dillmount’ in the American musical film ‘Thoroughly Modern Millie.’ The film was a box office hit.
From 1968 to 1972, her career went through a rough patch as she starred in flop films like 'Star!' and ‘Darling Lili.’ During that period, she was seen in the documentary film ‘Julie,’ and also appeared on TV in shows like 'An Evening with Julie Andrews and Harry Belafonte' and 'Julie and Carol At Lincoln Center.'
In 1972–73, she starred in the award-winning ‘ABC’ TV variety show ‘The Julie Andrews Hour.’ The show ended after a season, but she continued her association with ‘ABC.’
Continue Reading Below
In 1977, she guest-starred on ‘The Muppet Show.’ The following year, ‘Julie Andrews: One Step Into Spring’ was broadcast and received mixed reviews.
In 1980, she headlined the CBS-TV special ‘Because We Care,’ along with other prominent stars, in order to raise funds for the ‘Cambodian Famine’ victims. Later that year, she was seen in the film ‘Little Miss Marker.’
In 1981, she appeared in her first on-screen nude scene while playing ‘Sally Miles’ in Blake Edwards’ comedy film ‘S.O.B.’ The following year, she played a dual role in the film ‘Victor/Victoria.’
In 1983, she played ‘Marianna’ in the comedy film ‘The Man Who Loved Women.’ She earned ‘Golden Globe’ nominations for her subsequent films, 'That's Life!' and 'Duet for One.'
In 1987, she was seen in ‘Julie Andrews: The Sound Of Christmas,’ an ‘ABC’ Christmas special show. Following this, she was also seen on TV shows, such as ‘Julie & Carol: Together Again’ and ‘Julie Andrews in Concert.’
In 1991, she starred in the TV film ‘Our Sons,’ a film about AIDS victims. The film was inspired by the documentary film ‘Too Little, Too Late.’ The following year, she starred in the TV sitcom ‘Julie,’ and also hosted 'Christmas In Washington.'
In 1993, she was seen in the TV show ‘Sound of Orchestra.’ The same year, she played ‘Amy’ in the revue ‘Putting It Together,' which premiered at the ‘Manhattan Theatre Club.’
In the 1990s, she recorded two solo albums and starred in the stage production of ‘Victor/Victoria.’ She also starred in the ‘CBS’ network TV film ‘One Special Night.’
In 2001, she starred in the live TV show ‘On Golden Pond.’ The show was an adaptation of Ernest Thompson’s play of the same name. The same year, she also starred in ‘The Princess Diaries.’
Continue Reading Below
In 2003, she appeared in the film ‘Eloise at the Plaza.’ Subsequently, she starred in films, such as ‘Eloise at Christmastime’ and ‘The Princess Diaries 2: Royal Engagement.’
From 2004 to 2010, she played voice roles in films, such as 'Shrek 2,' 'Shrek the Third,' 'Enchanted,' 'Shrek Forever After,' and 'Despicable Me.' She was also seen in ‘Broadway: The American Musical.’
In 2017, she voiced ‘Marlena’ in the animated comedy movie ‘Despicable Me 3.’ The following year, she voiced ‘Karathen’ in the superhero film ‘Aquaman.’ Along with her daughter Emma, she co-created a preschool TV series titled ‘Julie’s Greenroom,’ which premiered on ‘Netflix’ in 2017.
She has authored many children’s books. Some of her books include ‘The Very Fairy Princess: Here Comes the Flower Girl,’ ‘Dragon: Hound of Honor,’ ‘Dumpy and the Firefighters,’ and ‘Dumpy to the Rescue!’ 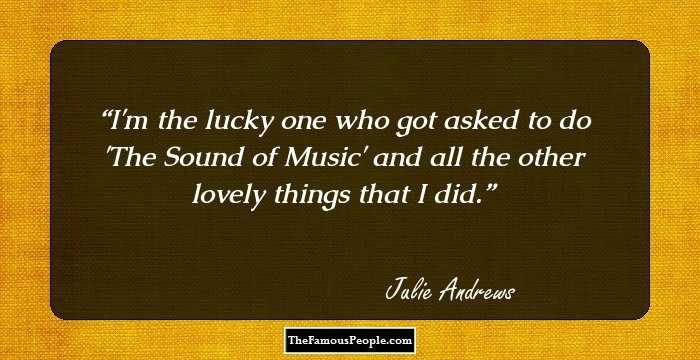 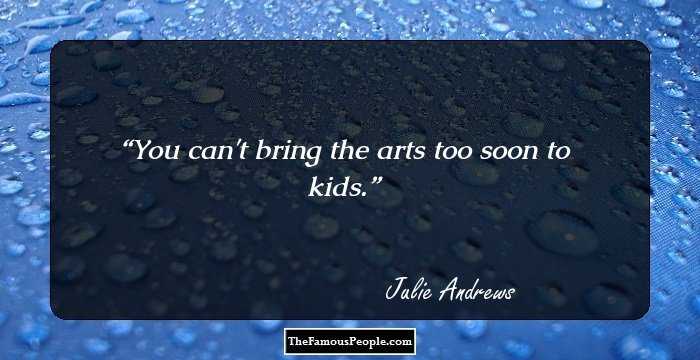 Quotes: You
Personal Life & Legacy
On May 10, 1959, she married a set designer named Tony Walton with whom she had a child. Andrews and Walton got divorced in 1967.
On November 12, 1969, she married Blake Edwards. They adopted two children, namely Amy and Joanna. Blake Edwards died in 2010.
Around 1997, she developed problems in her throat and could no longer continue in Broadway. She underwent surgery for the same.
In 2008, she published her autobiography titled ‘Home: A Memoir of My Early Years.’ The book made it to ‘The New York Times’ Bestseller List.
Trivia
This ‘Academy’ and ‘Golden Globe’ award-winning actor and Broadway star once sported a bumper sticker on her car that read ‘Mary Poppins is a junkie.’

Quotes By Julie Andrews | Quote Of The Day | Top 100 Quotes

See the events in life of Julie Andrews in Chronological Order