Judith Margaret Loe is an English stage and TV actor. She is best recognized for starring in the series ‘Singles’ and ‘Space Island One.’ After graduating with a BA degree in English and drama from the ‘University of Birmingham,’ Judy began acting in repertory theater shows in Crewe and Chester. She was part of the original British cast of the popular rock musical ‘Hair.’ She made her British TV debut with the fantasy children's show ‘Ace of Wands.’ In the ensuing years, Judy starred in the series ‘Yesterday's Dreams,’ ‘Singles,’ ‘Revelations,’ and ‘Space Island One.’ She has also guest-starred in series such as ‘Z Cars,’ ‘Dixon of Dock Green,’ ‘Ripping Yarns,’ ‘Miss Jones and Son,’ and ‘Robin's Nest.’ She was previously married to the late English actor Richard Beckinsale. She is presently married to British TV director Roy Battersby. Her daughter from Richard, Kate Beckinsale, and her stepdaughter, from Richard’s first marriage, Samantha, are both English actors. 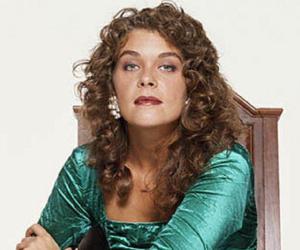 British People
University Of Birmingham
Pisces Actresses
British Actresses
Actresses Who Are In Their 70s
Childhood & Early Life
Judith Margaret Loe was born on March 6, 1947, in Urmston, Lancashire, England, to Norman Scarborough Loe and Nancy (Jones). Her father worked in an equipment business while her mother worked in a departmental store.
She studied at the ‘Urmston Grammar School’ and then graduated with a BA degree in English and drama the ‘University of Birmingham.’
Continue Reading Below
You May Like

Who Is The Most Popular BTS Member?
Career
Following her graduation, Judy performed in repertory theater in Chester and Crewe. The original British cast of the popular rock musical ‘Hair’ included Judy. She made her British TV debut in 1970, with the role of ‘Lillian “Lillu” Palmer’ in the fantasy children's program ‘Ace of Wands.’ It was aired on ‘ITV,’ between 1970 and 1972. She then guest-starred in TV series such as ‘Armchair Theatre,’ ‘Man at the Top,’ ‘Dixon of Dock Green,’ and ‘Z Cars.’
She appeared in ‘Woodstock,’ a short-lived ‘BBC’ TV show, in 1973. She took a hiatus from acting after her daughter, Kate Beckinsale, was born that year. She made her comeback in 1975 and appeared in the British TV miniseries ‘Edward the Seventh,’ featuring as ‘Princess May of Teck.’ It was made by ‘ATV’ and consisted of 13 episodes. This was followed by guest roles in comedy series such as ‘Miss Jones and Son,’ ‘The Upchat Line,’ ‘Robin's Nest,’ and ‘Ripping Yarns.’
From 1978 to 1979, she essayed the character of ‘Dr. Helen Sanders’ in the ‘ITV’ British daytime soap opera ‘General Hospital,’ produced by ‘ATV.’ In the ensuing years, she appeared in several other TV series, such as ‘The Gentle Touch’ (1980), ‘Heartland’ (1980), ‘Sunday Night Thriller’ (1980), and ‘When the Boat Comes In’ (1981). She was also featured in a small role of a nurse in the commercially successful 1983 British musical sketch comedy film ‘Monty Python's The Meaning of Life.’
She bagged the starring role of ‘Diane Daniels,’ opposite Paul Freeman, in the British romantic TV series ‘Yesterday's Dreams.’ The series was aired for a season on ‘ITV,’ from January 9 to February 20, 1987. The following year, she earned a starring role in the sitcom ‘Singles,’ playing ‘Pamela,’ appearing along with Roger Rees. It was broadcast on ‘ITV’ for three seasons, from June 19, 1984, to August 21, 1991.
Meanwhile, from 1990 to 1993, she played the regular role of ‘Dr. Elizabeth Stafford’ in the first three seasons of the ‘ITV’-aired British TV crime-drama series ‘The Chief.’
She played the lead role of ‘Jessica,’ alongside Paul Shelley, in the late-night soap opera ‘Revelations,’ which was broadcast between 1994 and 1996 on the ‘Granada,’ ‘Central,’ and ‘Carlton’ networks.
In 1997, she appeared in an episode of the British detective drama TV series ‘Inspector Morse,’ titled ‘Death is Now My Neighbour.’
Her next starring role was that of ‘Commander Kathryn MacTiernan’ in the British/German science-fiction TV series ‘Space Island One,’ which aired on ‘Sky One’ from January 7 to November 9 in 1998.
She portrayed the character of ‘Jan Goddard’ in the British medical drama series ‘Casualty’ from 2001 to 2002 and then again in the series spin-off, ‘Holby City,’ from 2002 to 2003. She also appeared in the long-running and ongoing British medical soap opera ‘Doctors’ in 2009.
The filmmaker’s commentary for the 2012 American 3D action–horror film ‘Underworld: Awakening,’ which starred Judy’s daughter Kate Beckinsale as ‘Selene,’ mentioned that Judy had made a cameo feature in the film, as a vampiress.
Lately, she has been seen in the film ‘Absolutely Anything’ (2015) and the series ‘Walliams & Friend’ (2016).
Family & Personal Life
In 1977, she married English actor Richard Beckinsale. Their daughter, Kate Beckinsale, was born on July 26, 1973. Kate has made her mark as a noted English actor. Judy also has a stepdaughter, Samantha, from Richard’s first marriage. Richard died on March 19, 1979, at 31 years of age.
Years later, on March 6, 1997, Judy married British TV director Roy Battersby.
You May Like

See the events in life of Judy Loe in Chronological Order