Advanced Search
Joss Whedon started off his career in the entertainment industry as a staff writer. Since then, his career has only spiraled upwards with him making valuable contribution in a number of award-winning films including, ‘Toy Story’ and ‘Serenity’. However, one project that was and remains closest to his heart is ‘Buffy the Vampire Slayer’, which he created and directed under his production label Mutant Enemy Productions. Apart from his successful career as a television writer, he has also produced a number of films including the horror film, ‘The Cabin in the Woods’ and has directed blockbuster hits like ‘Marvel’s The Avengers’. A cheerful, ambitious personality, Whedon dons the hat of a comic author as well, writing during his free time. He has created the comic versions for ‘Astonishing X-Men’, ‘Buffy the Vampire Slayer’, ‘Angel: After the Fall’ and ‘Runaways’. From a very young age, he was creatively inclined and always dreamt of becoming an actor. However, fate had other plans for him and today, he is known as the celebrated director, screenwriter and author, who has managed to gather a cult status with his prolific work. However, like every other personality in the entertainment industry, Whedon has also had his moments of disappointments. A number of his projects including an adaptation of ‘Wonder Woman’ and an animated show based on the ‘Buffy’ series never took off as per his plans. Thematically, Whedon’s works typically revolve around a sole protagonist, who works with a number of other characters in the film or show, to accomplish a goal. American People
Atheists
Directors
Screenplay Writers
T V & Movie Producers
Childhood & Early Life
Joseph Hill ‘Joss’ Whedon was born to Tom Whedon and Lee Stearns, in New York City. He is the third of the five children born to the couple. He studied at Riverdale Country School, where his mother was a history teacher.
From a very young age, he was extremely passionate about writing and acting and is believed to have been inspired by the works of William Shakespeare, Monty Python, Ray Bradbury, Steven Spielberg and James Cameron.
He studied at Wesleyan University and graduated from there in 1987. He then went to spend a couple of years at Winchester College, in England. 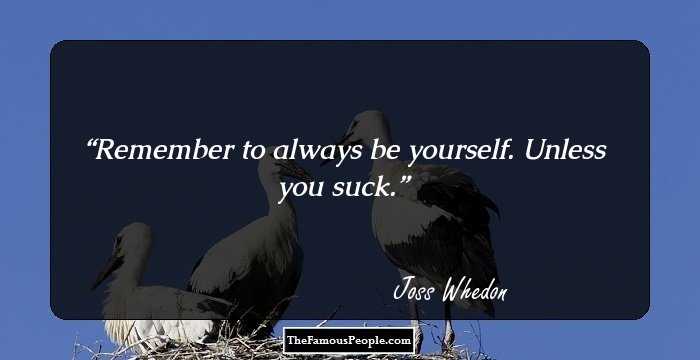 Quotes: You, Yourself
Continue Reading Below
Career
He started off as a staff writer for the 1989-1990 sitcom ‘Roseanne’, where he was the writer and also the producer. The same year, he also directed and wrote for the show, ‘Parenthood’.
He wrote the script for ‘Buffy the Vampire Slayer’, which released in 1992, starring Kristy Swanson, Hilary Swank and Donald Sutherland. The television adaptation of the same was yet to be made.
In 1994, he wrote the script for two films; ‘Speed’ and ‘The Getaway’; both of which became blockbuster hits and won a number of awards. His career catapulted to success the following year, when he was asked to pen the script for the films, ‘Waterworld’ and ‘Toy Story’.
In 1997, his most prized work ‘Buffy the Vampire Slayer’ was written and directed by him as a television series. Starring Sarah Michelle Gellar, Nicholas Brendan and Alyson Hannigan, the show had a successful run with a total of 144 episodes. The same year, he penned the script for ‘Alien Resurrection’.
In 1999, he wrote, directed and even co-produced another one of his pet projects ‘Angel’ that earned him widespread critical acclaim. The show was a spin-off from the original ‘Buffy’ series and was released on the ‘WB’ channel.
The new millennium saw him working on a number of projects including, ‘Titan A.E.’ and ‘X-Men’.
In 2001, he wrote the script for the movie, ‘Atlantis: The Lost Empire’. The following year, he wrote, directed and co-produced the television series, ‘Firefly’, which gathered a cult status.
In 2004, he was working on the animated series for ‘Buffy’, which never took off. The next year saw him writing the script for the film, ‘Serenity’, which he also happened to direct. Both ‘Firefly’ and ‘Serenity’ gained the top two spots in the poll conducted by New Scientist magazine, ‘The World's Best Space Sci-Fi Ever’. He also released a series of online shorts, titled ‘R. Tam Sessions’.
In 2005, he released the three-issue comic miniseries, ‘Serenity: Those Left Behind’ and the second comic book series, ‘Serenity: Better Days’ released three years later.
Continue Reading Below
In 2009, he wrote, directed and co-produced the American sci-fi television series, ‘Dollhouse’, which ran only for two seasons, but was a successful show till the time it ran.
2010-2011 proved to be an extremely busy year for the screenwriter/director as he directed one episode of the hit musical, ‘Glee’. He also went on to write the script for one of the biggest blockbusters of the year 2011; ‘Captain America: The First Avenger’, based on ‘The Avengers’ comics.
In 2012, he penned the script and produced the thriller flick ‘The Cabin in the Woods’. He also wrote and directed the film, ‘The Avengers’, which went on to make waves at the box-office.
Year 2013 began with him penning, directing and co-producing the television show, ‘Agents of S.H.I.E.L.D’ and for the films, ‘Much Ado about Nothing’ and ‘In Your Eyes’. 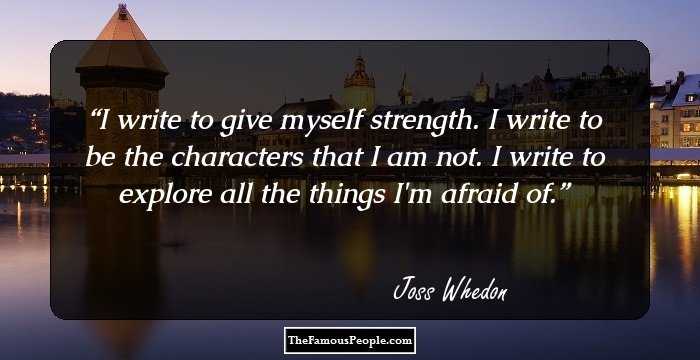 Quotes: I
Major Works
‘Buffy the Vampire Slayer’ is largely regarded as his magnum opus, which had a successful run from March 10, 1997 to May 20, 2003. The story is about a young woman who chooses to battle demonic elements, vampires and other forces of darkness. The show became so popular that it has a comic book adaptation, ‘Buff the Vampire Slayer’ and another related show, ‘Angel’. The series garnered around 4-6 million viewers from around the globe and was rated as one of the ’50 Greatest TV shows of All Time’.
Awards & Achievements
He won the Eisner Award for ‘Best Continuing Series’ for ‘Astonishing X-Men’, in 2006.
He won the Emmy Award for ‘Outstanding Special Class- Short-format Live-action Entertainment Program’ for ‘Dr. Horrible’s Sing-Along Blog’, in 2009.
He was presented with the Outstanding Lifetime Achievement Award in ‘Cultural Humanism’ by Harvard University, in 2009.
He won the Volta Award for ‘Contribution to Film’, in 2013.
He won the Bram Stoker Award for ‘Superior Achievement in Screenplay’, which he shared with Drew Goddard, for ‘The Cabin in the Woods’, in 2013.
He won the 13th Belfast Film Festival Audience Award for ‘Much Ado About Nothing’, in 2013. 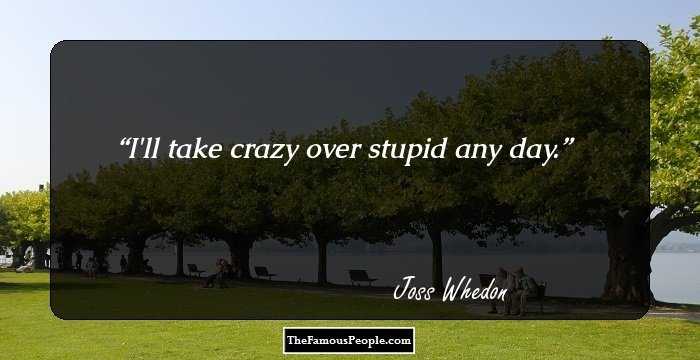 Personal Life & Legacy
He married Kai Cole, who is the co-founder of Bellwether Pictures. The couple has two children and currently resides in Los Angeles.
He believes he is a humanist and is an ardent supporter of gay rights.
Trivia
This popular screenwriter/director usually works on strong supernatural or sci-fi themes and always features a powerful female lead in most of his works.

Quotes By Joss Whedon | Quote Of The Day | Top 100 Quotes

See the events in life of Joss Whedon in Chronological Order