(Actor and Comedian Known for His Films: ‘It's a Mad, Mad, Mad, Mad World’ and ‘The Loved One’)
Advanced Search

Jonathan Winters, one of America’s best known comedians, enjoyed a career spanning six decades, and was described, "Pound for pound, the funniest man alive." After a stint in the Marine Corp during WW II, he returned, desperately looking to settle into a career. His big break as a comedian came after winning a talent contest. It brought him many assignments on television. At first, he performed as Johnny Winters, and soon had his own show on NBC, ‘The Jonathan Winters Show’. He had the distinction of being the first to use colored video tapes as part of the show. He was a good friend of Jack Paar and appeared frequently on ‘The Tonight Show’ when Paar was the host. He continued to perform on the show when Johnny Carson became its host. He also appeared on many other shows such as ‘The Dean Martin Show’, ‘The Dean Martin Celebrity Roast’, ‘The Andy Williams Show’, ‘The Steve Allen Show’, and ‘The Garry Moore Show’. He was a talented mimic; his impersonation of John Wayne, Cary Grant and President Kennedy is still remembered. Also memorable is the character of an old lady named Maude Frickert, weaved into his routines. He inspired comedians such as Billy Crystal, Steve Martin, and Jim Carrey, while Robin Williams idolized him.

Pete Davidson
Actors #1832
Comedians #356
Stand-up Comedians #72
DID WE MISS SOMEONE?
CLICK HERE AND TELL US
WE'LL MAKE SURE
THEY'RE HERE A.S.A.P
Quick Facts

American Celebrities
Stand-up Comedians
American Men
Ohio Actors
Scorpio Actors
Childhood & Early Life
Jonathan Winters was born on November 11, 1925 at Bellbrook, Ohio, to Alice Kilgore Rodgers, a radio personality, and Jonathan Harshman Winters II, an insurance salesman turned stock broker. When he was seven, his mother separated from his alcoholic father.
Mother and son shifted to Springfield, Ohio, to live with Alice’s mother. A weak student, he derived solace in the company of the imaginary characters he developed, in solitude, in his room.
He dropped out of school during his final year at Springfield High School. He took part in the Pacific operation of the U.S Marine Corp during the Second World War.
After returning home, he enrolled at Kenyon College. He later shifted to Dayton Art Institute, where he did a course in cartooning. He was a member of the Delta Kappa Epsilon fraternity. 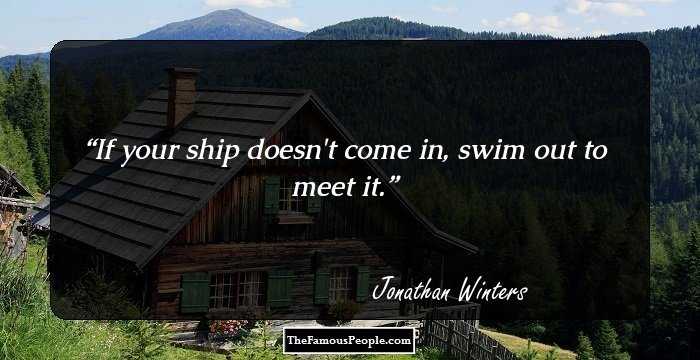 The Best Black Actresses Of All Time
Career
Winters started doing comedy routines while he was a student at Kenyon College. Between 1950 and 1953, he hosted several local programs for Columbus's WBNS-TV, but resigned after the station refused him a raise.
He moved to New York, where, having lost his wristwatch, he was encouraged by his wife to participate in a talent contest that promised a wristwatch for the winner - he won the contest.
Following his win in the contest, he began to get more television assignments. In 1954, he featured in the Broadway revue, ‘Almanac’, and on the television series, ‘Chance of a Lifetime’, as Johnny Winters.
In 1956, he began hosting the television series, ‘The Jonathan Winters Show’, on NBC. The first ever public demonstration of color videotape was broadcast on this show, that year.
He was the voice of two talking beer mugs, Shultz and Dooley, in a television advertisement for Utica Club beer, between 1959 and 1964. He also represented the Hefty brand of trash bags in advertisements.
He cut numerous comedy albums for Verve Records. One of his characters during the 1960s was of Maude Frickert, an old woman whose behavior was outrageous and unbecoming of a woman her age.
He became popular in ‘The Tonight Show’ hosted by Jack Paar between 1957 and 1962. In a prank, he even pretended to be President Kennedy over the telephone, on the show.
He continued his association with ‘The Tonight Show’ after Johnny Carson became the host. He would appear disguised as a character, leaving it for Carson to guess, during a mock interview.
In the 60s and 70s, he appeared regularly on ‘The Dean Martin Show’, ‘The Dean Martin Celebrity Roast’, ‘The Andy Williams Show’, ‘The Steve Allen Show’, ‘The Garry Moore Show’, and ‘The Hollywood Squares’.
Continue Reading Below
In the final season of the sci-fi comedy show, ‘Mork and Mindy’ in 1981, he was introduced as Mearth, Mork & Mindy’s child. His appearance in the show failed to prop up its ratings.
In the 1980s, he dubbed for many television and film characters. He lent his voice to Grandpa Smurf in ‘Smurf’, to Bigelow in the film, ‘Pound Puppies’, and in the cartoon series Yogi's Treasure Hunt.
He starred in the 1994 superhero film, ‘The Shadow’ as Wainwright Barth, a serious cop and uncle of the protagonist Lamont Cranston (‘The Shadow’), played by Alec Baldwin.
In the ABC television sitcom, ‘Life with Bonnie’, that aired from 2002 to 2004, he guest starred as a writer with multiple personalities, and was nominated for an Emmy award.
In the new century, he appeared in the films ‘The Adventures of Rocky and Bullwinkle’ and as Papa Smurf’s voice in ‘The Smurf’. His last work was the 2013 release, ‘The Smurfs 2’. 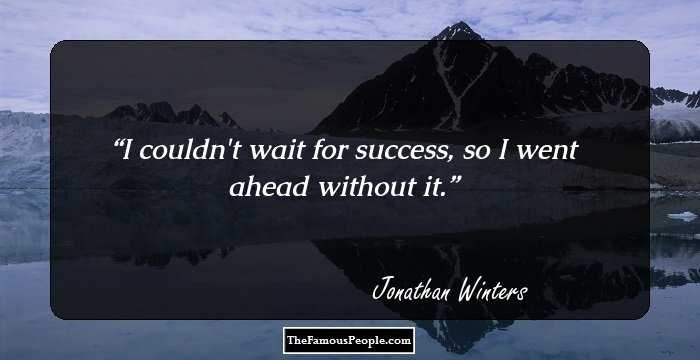 Quotes: I
Major Works
Winters’ role in the 1963 comedy film, ‘It's a Mad, Mad, Mad, Mad World’, about the crazy quest of $350,000 in stolen cash by a group of strangers, won him a Golden Globe nomination.
In the sitcom, ‘Davis Rules’, he essayed the role of Gunny Davis assisting his widowed son in bringing up his children. The role won him an Emmy Award in 1991
Awards
In 1991, he won a Primetime Emmy for his Supporting role in ‘Davis Rules’, and was adjudged American Comedy Award’s Funniest Male Performer in a TV Special for ‘Jonathan Winters and His Traveling Road Show’.
Winters received 11 Grammy nominations. He won two Grammies – Best Album for Children for his contribution to an adaptation of ‘The Little Prince’, and Best Spoken Comedy Album for ‘Crank(y) Calls’, in 1996.
Hollywood recognized his contribution to television, and particularly to comedy. On 8th February 1960, he was awarded a Star on the Walk of Fame for television at 6290, Hollywood Blvd. 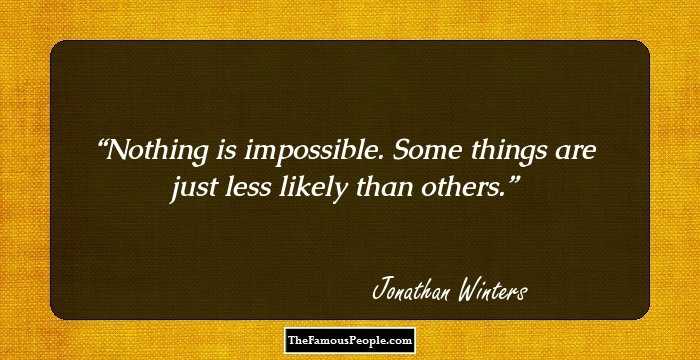 Personal Life & Legacy
Jonathan Winters married Eileen Schauder in 1948. She died after bravely battling breast cancer for 20 years.
He died on April 11, 2013 in California and is survived by his children, Jay and Lucinda.
Trivia
This American comedian was a gifted abstract painter. The book ‘Hang Ups’ is an anthology of his paintings. He was a good writer too, and penned a collection of short stories called ‘Winters Tales’.
This comedian was voluntarily institutionalized twice, and underwent treatment for bipolar disorder and nervous breakdowns; he returned to make it a subject of his standup routines.

See the events in life of Jonathan Winters in Chronological Order