Advanced Search
Considered one of the greatest American writers of the twentieth century, John Updike was a two-time Pulitzer Prize winner author and was also the recipient of many prestigious literary awards. A prodigious and prolific writer, most of Updike’s novels center on religion, sex and the American middle class. Talking about average American people, he once said, "I like middles. It is in middles that extremes clash, where ambiguity restlessly rules." Many of his novels have been adapted for movies and television for their visual appeal and proximity to the lives of Americans. Apart from a fair number of novels and short stories to his credit, he was also a regular contributor to ‘The New Yorker’. According to famous essayist and writer, Adam Gopnik, Updike was "the first American writer since Henry James to get himself fully expressed, the man who broke the curse of incompleteness that had haunted American writing”. Updike’s prose style has always been the highlight of his novels for its "rich description and language," making it almost inimitable. However, his novels are not his only major works. He was an equally good poet and short story writer. He has a composed huge number of poems, written a large number of short stories and essays and literary criticisms. To know more about this great personality, read the biography below. Lauren Graham
18th March In History
DID WE MISS SOMEONE?
CLICK HERE AND TELL US
WE'LL MAKE SURE
THEY'RE HERE A.S.A.P
Quick Facts

American Celebrities
Novelists
Literary Critics
Short Story Writers
American Men
Childhood & Early Life
John Updike was born in Pennysylvania to Linda Grace and Wesley Russell Updike. His mother’s aspiration for writing and getting her works published served as an inspiration for him from a very young age.
He completed high school studies from the Governor Mifflin Senior High School in 1950 and went to study at Harvard University on a full scholarship to major in English.
While at Harvard, he contributed cartoons to the in-house journal ‘Harvard Lampoon’ and later became its president. He graduated in 1954 earning a degree in English.
Following his graduation he attended ‘The Ruskin School of Drawing and Fine Art’ at the University of Oxford to become a graphic artist. 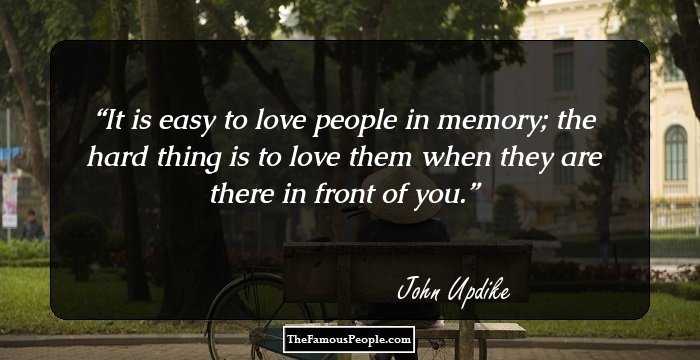 Quotes: You, Love
Continue Reading Below
Career
After returning to the U.S. he moved from Pennsylvania to New York where he contributed to ‘The New Yorker’ to begin his career in writing.
In 1958, he published his first book of poetry ‘The Carpentered Hen and Other Tame Creatures’ and in 1959 he published ‘The Same Door’.
He relocated to Ipswich, Massachusetts with his family in 1960 where he wrote another of his books ‘Rabbit, Run’ and in 1963 ‘The Centaur’ was published. Both the works were well-received and later won him a National book Award.
Until he came up with his next piece of work, he continued to contribute to ‘The New Yorker’. In 1971, he wrote a sequel to the ‘Rabbit Run’ called ‘Rabbit Redux’ .
In 1979 he came out with a collection of short stories ‘Too Far To Go’
His next big work of literature was in 1980 with the publication of ‘Rabbit Is Rich’ which brought him great critical acclaim worldwide.
Following the publication of the ‘Rabbit’ sequel, he came up with ‘The Witches of Eastwick’ in 1984 and ‘Roger's Version’, in 1989.
His final rabbit novel was ‘Rabbit At Rest’ published in 1990 in which the protagonist dies. The book was critically acclaimed and made him one of the most celebrated writers of his time.
In the later part of his career he wrote a number of novels; the most famous one being 1996 novel ‘In the Beauty of the Lilies’.
Continue Reading Below
In 2006, he published ‘Terrorist’ which though did not gain much critical praise but attracted a lot of media attention.
His last novel was ‘The Widows of Eastwick’ in 2008, a sequel to one of his previous novels ‘The Witches of Eastwick’. 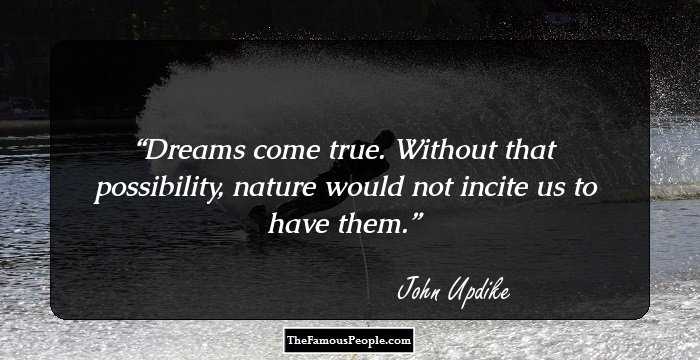 Quotes: Nature, Dreams
Major Works
Updike’s most celebrated work till date is his ‘Harry ‘Rabbit’ Angstrom’ which refers to the four novels he wrote namely, ‘Rabbit, Run’, ‘Rabbit Redux’, ‘Rabbit Is Rich’ and ‘Rabbit At Rest’. Harry ‘Rabbit’ Angstrom or just ‘Rabbit’, a fictional character, is the protagonist whose childhood, youth, adulthood and death form the basis of the novels.
‘The Witches of Eastwick’ written in 1984, is another great novel by this author which was adapted to a film, a television series and was also made into several musicals.
Awards & Achievements
For his novel ‘Rabbit Is Rich’, Updike was awarded the Pulitzer Prize for Fiction in 1982 along with the National Book Award and the National Book Critics Circle Award.
He was awarded the Pulitzer Prize for the second time in 1991 after the publication of his magnum opus, ‘Rabbit at Rest’. 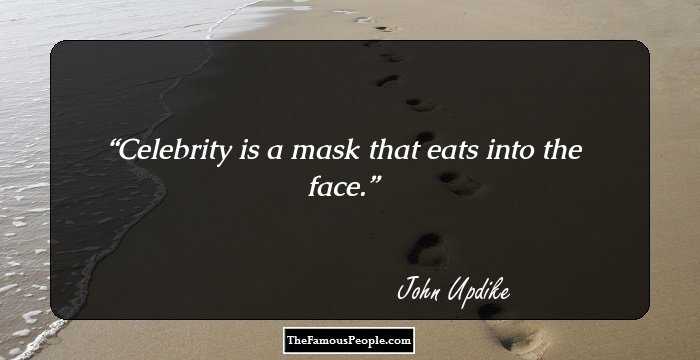 Personal Life & Legacy
Updike married Mary E. Pennington in 1953 and in 1955, their first child Elizabeth was born. They had three more children, before they divorced in 1974.
In 1977, he married Martha Ruggles Bernhard with whom he spent the rest of his life.
He died of lung cancer at the age of 76.
Trivia
Apart from William Faulkner and Booth Tarkington, this great American novelist is the only writer to have won two Pulitzer Prizes for fiction.
Recommended Lists:
Literary Critics #3
Writers #793
Critics & Connoisseurs #13

Quotes By John Updike | Quote Of The Day | Top 100 Quotes

See the events in life of John Updike in Chronological Order