John Smeaton was an English engineer and a physicist, famously known as the ‘Father of Civil Engineering’. He was a master at his work and a self-proclaimed Civil Engineer, an eminent forerunner of his profession. Although initially he pursued the legal profession like his father, later he decided to be an instrument maker. He gained most of his training and scientific knowledge through reading and attending the meetings of Royal Society of London. He constructed bridges, canals and harbors in addition to his works of mechanical engineering. He devised new ways for construction; whether it was the material he used for building or the technique to strengthen the rigidity of the object. Through his dedication and genuine efforts, his every project emerged as a masterpiece, a passionate work of art. He transformed the work of engineering, which was considered as a handicraft work, to a scientific process of experimenting and devising mechanisms in architectural work. He was the first person to coin the term ‘civil engineers’ and also established the first ever engineering society in the world. His earnest work is an inspiration for everyone; to be fearless of the choices they make in life and work with dedication for their dreams to come true. British People
Male Engineers
Gemini Engineers
British Engineers
British Civil Engineers
Childhood & Early Life
He was born on June 8, 1724 in Austhorpe, Leeds, England. His father was an attorney having a law firm.
In childhood, he used to make hand tools through forging and casting. He made a small lathe for turning wood and also a steam engine which succeeded in pumping out water from his father’s pond.
At the age of 16, his father persuaded him to join his law firm. He started legal studies at his father’s office. Two years later, he was about to enter the legal profession formally when he decided to leave it and pursue his dream of being an instrument maker. 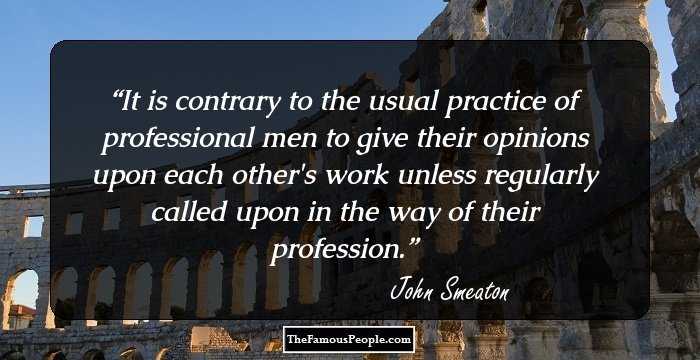 The Best Black Actresses Of All Time
Career
In 1748, he opened his own shop in Great Turnstile in London with a little knowledge of science and tool-making under his sleeve. His friend, Henry Hindley, helped him to understand the art of making instruments.
In 1750, he collaborated with Dr. Gowin Knight to develop a mariner’s compass, which later became a Royal Navy standard issue. Along with the compass, he also invented a prototype machine to measure the speed of ships, which was not very accurate in heavy seas.
In 1751, he moved his shop from Great Turnstile to a larger place in Furnival Inn Court and employed three craftsmen under his supervision.
In 1752, he conducted some experiments related to power of windmills and water wheels which were successful and proved his expertise in the knowledge of science and engineering.
In 1756, he was chosen to build the new lighthouse for Eddystone Rocks near Plymouth, England. It was his first and one of his most acknowledged engineering projects.
In 1759, he published a paper concerned with watermills, the major source of power at that time. His work was honored with the Copley Award.
In 1760, he showed his mechanical engineering skills and developed a water pressure engine that pumped water which was later superseded by James Watt’s steam engine. He also developed a pyrometer to study material expansion
During his professional career, he engineered the construction of various canals, bridges and harbors including the Coldstream Bridge, Ripon Canal, Aberdeen Bridge, Peterhead Harbour and Forth and Clyde Canal in Scotland. He also contributed in building 43 mills including his most significant one at Carron Company ironworks in 1769.
In 1782, he built the Chimney Mill at Spital Tongues in ‘Newcastle upon Tyne’, the first 5-sailed smock mill in Britain. He is also recognized for improving the Edmund Halley’s diving bell by adding an air pump to it, so that it can be used underwater as well.
Continue Reading Below
He was member of Lunar Society and a co-founder of the ‘Society of Civil Engineers’ in 1771 which was renamed ‘Institution of Civil Engineers’ in 1818.
From 1759 to 1782, he conducted some experiments which supported the theory of formulation of conservation of energy by Gottfried Leibniz. But his discovery was opposed by followers of Isaac Newton, who believed his formulation was inconsistent with Newton’s theory of conservation of momentum.
Major Works
One of his most notable works is of the construction of the lighthouse on Eddystone Rocks from 1756 to 1759. After the destruction of two previous lighthouses due to storms, he was selected to construct a rigid one which he did successfully. He was the first to use ‘hydraulic lime’ for its steady foundation and also developed a technique involving dovetailed blocks of granite for its construction.
In 1759, he published a paper ’An Experimental Enquiry Concerning the Natural Powers of Water and Wind to Turn Mills and Other Machines Depending on Circular Motion’ addressing the relationship between pressure and velocity for objects moving in air and his concepts were subsequently developed to devise the 'Smeaton Coefficient'.
He coined the term ‘civil engineers’ to distinguish them from military engineers of that time and was also a co-founder of ‘Society of Civil Engineers’ in 1771.
Awards & Achievements
In 1753, he became a Fellow of the Royal Society through his published papers on instrument making.
He was honored with the Copley Award in 1759 for his extraordinary research in the mechanics of waterwheels and windmills.
In 1834, the Society of Civil Engineers, which he was a co-founder of, was renamed as the ‘Smeatonian Society of Civil Engineers’ in his honor.
Personal Life & Legacy
He never married and had no children.
He died on October 28, 1792 due to a stroke. He was buried in the parish church at Whitkirk, West Yorkshire.
He was a great personality who encouraged the emerging talents of his time. His pupils included canal engineer William Jessop and architect Benjamin Latrobe.
You May Like

See the events in life of John Smeaton in Chronological Order