Isambard Kingdom Brunel was a great English civil engineer who lived during the 19th century. He was the man who built the Great Western Railway, the railway company which linked London with the west part of England. The company, which pioneered the use of large, more economic wagons, was known as "God's Wonderful Railway". Brunel was a civil engineer with a highly innovative mind. He was always open to experimenting with different engineering techniques and ideas in order to devise better solutions to the existing problems. Many “firsts” in British civil engineering are credited to him. A risk-taker, he was never afraid to move away from traditionally held notions nor was he loath to implement unconventional concepts. He came up with the idea of building a tunnel under a river and played a pivotal role in the development of the first propeller-driven iron ship meant to sail on the oceans thus revolutionizing naval engineering. His brilliant mind could have achieved much more, if he had not been a heavy smoker. He suffered a stroke and died when he was just 53. Named at the second place in a BBC public poll, ‘100 Greatest Britons’, he was a much celebrated civil engineer during his time; several monuments erected in his honor are testament to the fact that is revered in today’s times too. John Bradfield
Civil Engineers #2
Engineers #3
9th April In History
DID WE MISS SOMEONE?
CLICK HERE AND TELL US
WE'LL MAKE SURE
THEY'RE HERE A.S.A.P
Quick Facts

British People
British Men
Aries Engineers
Male Engineers
British Engineers
Childhood & Early Life
He was born to a French civil engineer Sir Marc Isambard Brunel and Sophia Kingdom in Hampshire. He had two sisters. His father was a successful professional and he had a happy childhood.
His father tutored him in drawing and observational techniques. From a young age his father instilled in him a love for civil engineering.
He was sent to Dr. Morrell’s boarding school in Hove when he was eight. His father was very particular that Isambard receive high quality education and thus he sent him to the College of Caen in Normandy and then Lyc�e Henri-IV in Paris.
His father, though a brilliant engineer, was poor with managing finances and had accumulated a lot of debts because of which he was sent to a debtor’s prison. He was however released later on.
Isambard tried for a seat in the famous French engineering school �cole Polytechnique. But the school refused to accept him as he was a foreigner. He then became an apprentice under horologist Abraham-Louis Breguet and came back to England in 1822. 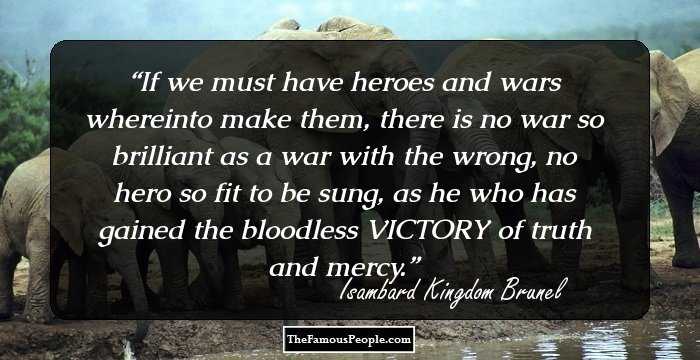 The Best Black Actresses Of All Time
Career
On returning to England he started working with his father. The work to build a tunnel under London's River Thames began in 1825 and a couple of years later Isambard Brunel was appointed Resident Engineer on the project which his father was managing.
A major accident occurred during the building of the tunnel in 1828 in which two senior miners were killed. Brunel himself narrowly escaped death and was seriously injured. This forced the work to stop for several years.
In 1831, a competition was held for finding the best design to build a bridge across the Avon river gorge at Clifton in Bristol. Brunel won the competition and got the opportunity to design the Clifton Suspension Bridge.
Work on the Clifton Suspension Bridge began in 1831. The bridge had the longest span of any bridge in the world at that time. However, the work had to be stopped because of the Queen Square Riots. The bridge would not be completed within Brunel’s lifetime.
He was appointed chief engineer of the Great Western Railway in 1833. He decided to use a broad gauge of 7 ft (2,134 mm) for the tracks which created much controversy as most British Railways of that time used standard gauge. The railway started running its first trains in 1838.
In 1836, he was appointed engineer of Great Western Steam Ship Company and began the construction of the SS Great Britain, a passenger steamship, which was the first propeller driven iron ship and also the largest ship of her time. The ship was launched in 1843.
He designed the SS Great Western, an oak-hulled paddle-wheel steamship, built for crossing the Atlantic. From 1837 to 1839, she was the largest passenger ship. She was later sold to the Royal Mail Steam Packet Company.
Over the course of his career he designed many bridges including the Royal Albert Bridge spanning the River Tamar, the Somerset Bridge, the Windsor Railway Bridge, and the Maidenhead Railway Bridge over the Thames.
Major Works
He is best known as the chief engineer of the Great Western Railway project. The railway was built to connect London with the west of England and Wales. He implemented many innovations in his design of the railway which later came to be known as "God's Wonderful Railway".
Awards & Achievements
He was elected a Fellow of the Royal Society in 1830.
The Brunel Museum in England is dedicated to the works of Isambard Kingdom Brunel and his father, Marc.
Personal Life & Legacy
He married Mary Elizabeth in 1836. His wife was the daughter of composer Horsley. The couple had three children. One of his sons, Henry, too became a successful civil engineer.
He was a heavy smoker. He suffered a stroke in 1859 and died after ten days; he was just 53 years old.
Trivia
This early 19th century English civil engineer was the subject of ‘Great’, an animated film directed by Bob Godfrey in 1975.
You May Like