John Cleese is an English actor, producer, screenwriter, and comedian. The most revered figure in British comedy, he is perhaps one of the few comedians to come up with original, innovative slapstick antics and puerile character sketches. A law graduate from ‘Downing College,’ Cambridge University, Cleese became part of the famed ‘Footlights Dramatic Club’ at the university. ‘Footlights’ provided him the platform to showcase his comedic talent and he soon became part of the immensely successful ‘Footlights’ revue, ‘Cambridge Circus.’ This helped him launch his career in comedy. He later became part of the legendary comedy group ‘Monty Python.’ The group created the popular British sketch comedy series ‘Monty Python’s Flying Circus.’ He was also part of the group’s films, such as 'And Now for Something Completely Different,' 'Monty Python and the Holy Grail,' 'Life of Brian,' and 'The Meaning of Life.' He is also the co-creator of ‘Emmy’ award-winning sitcom ‘Fawlty Towers’ in which he played ‘Basil Fawlty.’ John Cleese is also a writer and has co-authored two books, namely ‘Families and How to Survive Them’ and ‘Life and How to Survive It.’ He attended ‘St Peter's Preparatory School’ where he exceled in English studies and actively participated in cricket and boxing competitions. When he was 12, he landed his first acting role in a school theatre production.

At the age of 13, he received a scholarship to study at ‘Clifton College,’ an English public school in Bristol. It was there that he played cricket professionally and exceled in academics.

In 1958, he graduated from ‘Clifton College’ and took up a teaching job at his former alma mater ‘St Peter's Preparatory School.’ He taught English, Science, Geography, History, and Latin.

In 1960, he gained admission to study law at ‘Downing College,’ Cambridge University. It was during his years at the university that he showed his comedy skills at the famed ‘Footlights Dramatic Club.’ At ‘Footlights,’ he met his future professional partner, Graham Chapman.

In 1961, he wrote additional material for the ‘Footlights Dramatic Club’ revue, ‘I Thought I Saw It Move.’ The following year, he was appointed as the registrar of the club and also acted in the revue, ‘Double Take!’ 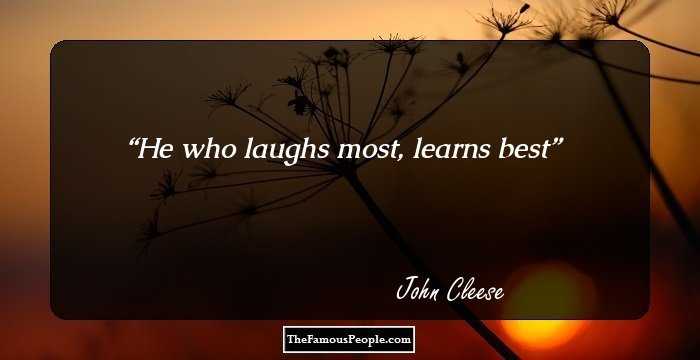 In 1963, he graduated from ‘Cambridge University.’ The same year, he was employed as one of the script writers and cast members of the ‘Footlights’ revue, ‘A Clump of Plinths.’ The Revue was successful at the ‘Edinburgh Festival Fringe’ and was renamed ‘Cambridge Circus.’

On July 10, 1963, ‘Cambridge Circus’ opened at the ‘West End’ theatre in London. The show later opened in New Zealand, where four radio shows and a television special were recorded and broadcast the following year.

In October 1964, he was seen in some of the sketches of ‘The Ed Sullivan Show,’ broadcast on CBS. Post ‘Cambridge Circus,’ he performed on and Off-Broadway.

He also worked as a sketch writer for ‘The Dick Emery Show.’ In 1965, the success of ‘Cambridge Circus’ inspired the creation of the BBC radio comedy, ‘I'm Sorry, I'll Read That Again.’

In 1965, he began to write for ‘The Frost Report.’ The following year, he was introduced to television as a performer for the series. His tall built and good looks caught the attention of many. It was during this time that he became acquainted with British comedian Peter Cook.

In 1967, he and Graham Chapman were employed as writers and performers for the satirical TV show ‘At Last the 1948 Show.’ He also wrote sketches for the TV comedy series ‘Doctor in the House.’

He co-wrote the 1968 television show ‘How to Irritate People.’ He also began to work on a television project with Graham Chapman, Eric Idle, Terry Gilliam, Terry Jones, and Michael Palin. Together, they formed the comedy group ‘Monty Python.’

In 1969, along with the members of ‘Monty Python,’ he created the British sketch comedy series ‘Monty Python’s Flying Circus.’ The series was broadcast on ‘BBC Television’ network.

From 1970 to 1973, he was employed as the rector of the ‘University of St Andrews.’ During this time, he also worked on the sketch of the stand-up comedy show ‘Sez Les’ with comedian Les Dawson.

In 1971, the film ‘And Now for Something Completely Different’ released. The film was inspired by the television comedy series ‘Monty Python’s Flying Circus.’

In 1972, along with many other television professionals, he co-founded the video production company ‘Video Arts.’ The company produced training videos like ‘Meetings, Bloody Meetings’ and ‘More Bloody Meetings.’

He quit ‘Monty Python’ after the third season of ‘Monty Python’s Flying Circus.’ He starred in the British comedy sketch show ‘Sez Les’ from 1974.

Even after officially quitting ‘Monty Python,’ he maintained cordial relations with them and began writing with them for the film ‘Monty Python and the Holy Grail.’ The film released on April 9, 1975.

Released on September 19, 1975, the award-winning British BBC sitcom ‘Fawlty Towers’ was written by him and his then-wife Connie Booth. The couple also starred in the show.

He appeared as a guest on the TV series ‘The Muppet Show.’ In 1980, he worked on the TV special ‘Peter Cook and Co.’ He then played 'Petruchio' in the BBC Shakespeare series ‘The Taming of the Shrew.’

In 1981, he played ‘Robin Hood’ in the British fantasy film ‘Time Bandits.’ The following year, he was part of the concert film ‘Monty Python Live at the Hollywood Bowl.’ He also starred in ‘The Secret Policeman's Ball’ to raise funds.

In 1983, his bestselling self-help book titled ‘Families and How to Survive Them’ was published. The book was co-authored by psychiatrist and psychotherapist Robin Skynner. That year, he also co-wrote the film ‘Monty Python's The Meaning of Life.’

In 1985, he played a minor role in the film ‘Silverado.’ The following year, he played the role of ‘Mr. Stimpson,’ a disciplinarian school headmaster in the British comedy film ‘Clockwise.’

In 1988, he played the role of ‘Lawyer Archie Leach’ in the ‘Academy’ award-winning heist-comedy film ‘A Fish Called Wanda.’ The next year, he was seen in films like ‘Erik the Viking’ and ‘The Big Picture.’

In 1993, in collaboration with psychiatrist and psychotherapist Robin Skynner, he authored the book ‘Life and How To Survive It.’ The same year, he starred in the British film ‘Splitting Heirs.’

In 1999, he was seen in the James Bond film ‘The World Is Not Enough’ where he played ‘R.’ He also appeared in another James Bond film ‘Die Another Day’ in which he reprised his role as ‘R.’

In 2001, he was seen in the comedy film ‘Rat Race,’ directed by Jerry Zucker. The following year, he made a cameo appearance in the film ‘The Adventures of Pluto Nash.’

In 2004, he was the co-writer for the DC Comics graphic novel ‘Superman: True Brit.’ The following year, he went on a tour to New Zealand for a stage show titled ‘Cleese-His Life, Times and Current Medical Problems.’

He made a guest appearance in one of the episodes of the fifth season of American sitcom TV series ‘Cheers.’ He frequently appeared on the comedy series ‘Will & Grace.’ He also voiced ‘King Harold’ in ‘Shrek 2,’ ‘Shrek the Third,’ and ‘Shrek Ever After.’

In 2012, he did 'An Evening with John Cleese,' which ran for a couple of weeks in Dubai. He was also cast in ‘Hunting Elephants,’ but later backed out of the film due to heart problems.

In 2013, he appeared as himself in the documentary film ‘Chalky,’ which was about producer Michael White. The same year, it was announced that he would go to Canada for a comedy tour and host shows in Dubai.

Cleese joined hands with Eric Idle for the 2015 and 2016 tour of North America, Canada, Australia, New Zealand, and the United States.

He has also voiced characters in many animated films like ‘Planes,’ ‘Trolls,’ ‘Charming,’ and ‘Arctic Dogs.’� 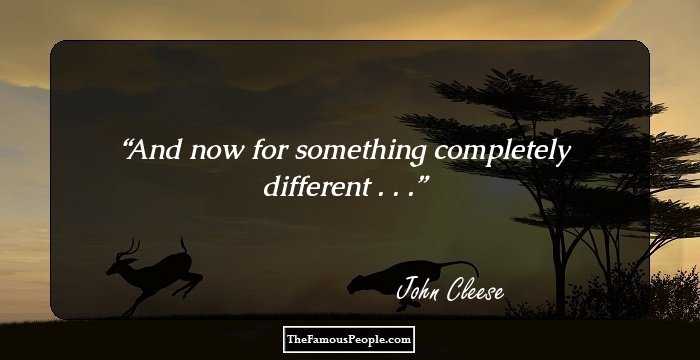 His show ‘Fawlty Towers’ was placed at number one position on the British Film Institute’s list of ‘100 Greatest British Television Programmes.’ In the 2004 Britain's Best Sitcom poll, the show was voted fifth.

The comedy sketch ‘Monty Python’s Flying Circus’ was included in Channel 4’s list of ‘50 Greatest British Sketches.’ It was also included in ‘Time’ magazine’s list of '100 Best TV Shows of All Time' in 2007.

In 1980, he received a ‘BAFTA’ under the ‘Best Light Entertainment Performance’ category for ‘Fawlty Towers.’

In 1987, he won the ‘Primetime Emmy’ for ‘Outstanding Guest Performer in a Comedy Series’ for 'Cheers.' 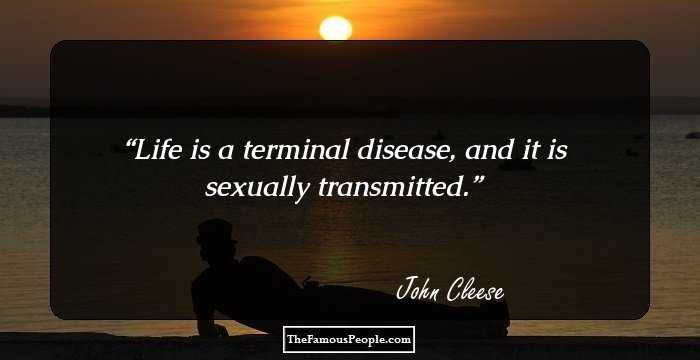 He has been married four times and three of his marriages ended in divorce. His former spouses are Connie Booth, Barbara Trentham, and Alyce Faye Eichelberger. In 2012, he married Jennifer Wade.

He has two children from his previous marriages; one from his marriage with Connie Booth and one from Barbara Trentham.

This English comedian’s ancestral name was ‘Cheese,’ but his father was too embarrassed to continue with the name and changed it to ‘Cleese’ when he enlisted in the ‘World War I Army.’

5. And Now for Something Completely Different (1971)

Quotes By John Cleese | Quote Of The Day | Top 100 Quotes

See the events in life of John Cleese in Chronological Order