Known for his debonair good looks and boyish charm, John Krasinski is one of the most ‘popular’ television stars of today. He has appeared in a number of films including ‘Away We Go’, ‘License to Wed’, ‘Something Borrowed’ and ‘It’s Complicated’, but is best known for portraying the character of ‘Jim Halpert’ in the popular American sitcom, ‘The Office’. He started laying the foundation for a livelihood in the entertainment industry by attending National Theater Institute and The Royal Shakespeare Company, which helped him garner a few commercials in New York and a few off-Broadway plays. In order to live a decent life in the city of dreams, he worked as a waiter to manage his expenses. Although he appeared in a number of episodes on hit television shows like ‘CSI: Crime Scene Investigation’ and ‘Ed’, he got his first breakthrough with ‘The Office’, which earned him a number of prestigious awards and nominations. Apart from acting, he has also directed a couple of episodes of ‘The Office’ and has written and directed, ‘Brief Interviews with Hideous Men’, which premiered at the Sundance Film Festival. American People
Directors
American Men
Massachusetts Actors
Brown University
Childhood & Early Life
John Burke Krasinski was born on October 20, 1979, in Boston, Massachusett, to Dr. Ronald Krasinski and Mary Clare. He has two older brothers: Kevin and Paul. He was raised as a Roman Catholic.
He enrolled at Brown University, where he studied theater arts. While attending college, he also assisted in coaching the basketball team at The Gordon School, Rhode Island.
After graduating from college as a playwright with an honors thesis entitled ‘Contents Under Pressure’, he went to attain training at the National Theater Institute, in Waterford, Connecticut
Meanwhile, he even attended The Royal Shakespeare Company in Stratford-upon-Avon, England and The Actors Center in New York City. It was in New York that his tryst with the acting began as he bagged a few commercials and guest-spots on television shows.
He also appeared in off-Broadway plays, while simultaneously working as a waiter to earn additional money.
He was appointed as a script intern on ‘Late Night with Conan O’ Brien’ in 2000. 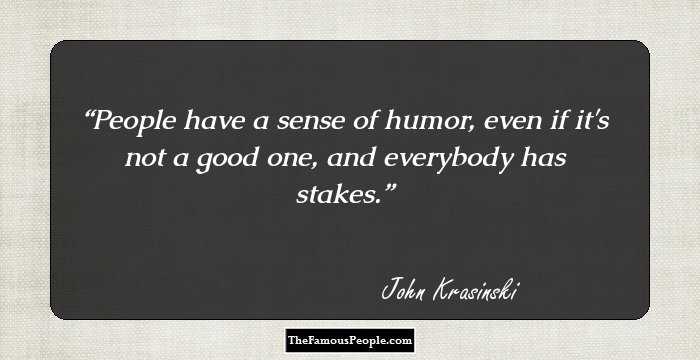 Continue Reading Below
Career
He made a cameo appearance in the film, ‘State and Main’, where he played the role of the judge’s assistant. Two years later, he starred in two movies; ‘Fighting Still Life’ and ‘Alma Mater’.
He debuted on television on an episode of ‘Ed’, in 2003. He then went on to appear in an episode of ‘Law & Order: Criminal Intent’ as Jace Gleesing. The following year, proved to be a busy one for Krasinski as he starred in the film, ‘Kinsey’ and made a cameo appearance in ‘Taxi’.
Year 2005 proved to be an extremely fruitful year for him as he starred in two unconventional films, ‘Duane Hopwood’ and ‘Jarhead’. He was also cast in the popular American television series, ‘The Office’ as ‘Jim Halpert’, for which he received a number of awards and was also nominated in a number of popular categories.
In 2006, he starred in the television series, ‘American Dad!’. He was also seen in films such as ‘Doogal’, ‘For Your Consideration’, ‘Dreamgirls’ and ‘The Holiday’. The same year, he began narrating a series of commercials for Ask.com, Apply TV and Verizon Wireless. What’s more, he even appeared in a number of print advertisements for the brand, Gap.
2006 also saw him debut as a writer and director with ‘Brief Interviews with Hideous Men’, which was a film adaptation based on the short-story collection by David Foster Wallace.
In 2007, he appeared in films like ‘A New Wave’, ‘Smiley Face’, ‘License to Wed’ and in a voice role for ‘Shrek the Third’. The following year, he was cast as Carter Rutherford in the movie, ‘Leatherheads’.
From 2009 to 2011, he made a number of big screen appearances with films like “Away we Go’, ‘The Muppets’ and ‘It’s Complicated’. He was also seen in the television show, ‘Rove LA’, where he was cast as himself in a single episode.
The 2012 released film ‘Promised Land’ saw him don the hat of a producer, in addition to being one of the screenwriters and actors for the film. The following year, he starred as Frank McCay in ‘Monster’s University’ and also appeared in an episode of ‘Arrested Development’. 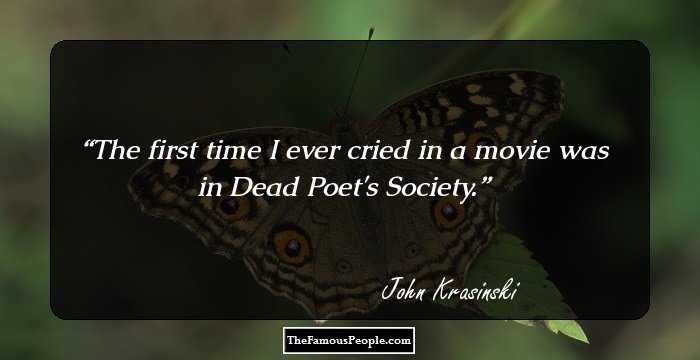 Continue Reading Below
Major Works
In 2005, he played the character of Jim Halpert for the hit American comedy series, ‘The Office’, which depicts the everyday life in office. All the seasons of ‘The Office’ received widespread critical acclaim and have won several awards. Till date, it is the highest-rated scripted series on the NBC and became one of the first shows that were available for download online from the iTunes Store.
Awards & Achievements
He won the Screen Actors Guild Awards for ‘Outstanding Performance by an Ensemble in a Comedy Series’ for ‘The Office’ in 2006 and 2007, consecutively.
His film, ‘Brief Interviews with Hideous Men’ was showcased at the famous Sundance Film Festival, in 2009. 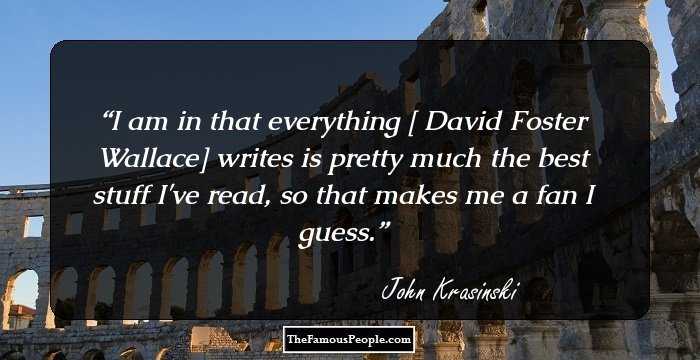 Family & Persona Life
He married Emily Blunt on July 10, 2010, at Como, Italy. The grand wedding was attended by superstars such as George Clooney, David Schwimmer, Meryl Streep, and Matt Damon.
Krasinski and Blunt have two daughters: Hazel, born in February 2014; and Violet, born in July 2016.
Krasinski is a fan of the Boston Red Sox team of Major League Baseball (MLB).
Trivia
This popular American actor from ‘The Office’ fame hosted a fundraiser for Democratic Senate nominee, Elizabeth Warren, along with Ben Affleck and Matt Damon.

Quotes By John Krasinski | Quote Of The Day | Top 100 Quotes

See the events in life of John Krasinski in Chronological Order