Fred Allen, born John Florence Sullivan, was an American comedian. Beginning his career as an entertainer in the vaudeville as a comic juggler, he starred on Broadway with his partner/wife Portland Hoffa in revues such as ‘The Passing Show’. He soon became immensely popular with the ‘Fred Allen Show’. One of this series' most popular features was ‘Allen's Alley’, a weekly jokefest which had the recurring characters Senator Claghorn, Mrs. Nussbaum and Titus Moody Allen. His best-remembered gag was his long-running mock feud with friend and fellow comedian Jack Benny. He continued his radio program until it was knocked out of the ratings race by CBS' ‘Stop the Music’. Throughout his career, he had acted in films, but did not relish scripted acting. During the 1950s, Allen worked primarily as a guest star on other comedians' radio and TV series and appeared as a regular on ‘What's My Line?’. A prolific writer, Allen turned also published two best-selling memoirs in his last decade, ‘Much Ado About Me’ and ‘Treadmill to Oblivion’. His routines influenced fellow comic talents, including Groucho Marx, Stan Freberg, Henry Morgan and Johnny Carson, while President Franklin D. Roosevelt and novelists William Faulkner, John Steinbeck and Herman Wouk were among his fans.

Adam Sandler
Comedians #895
Film & Theater Personalities #12067
DID WE MISS SOMEONE?
CLICK HERE AND TELL US
WE'LL MAKE SURE
THEY'RE HERE A.S.A.P
Quick Facts

American Celebrities
American Men
Boston University
Male Comedians
American Comedians
Childhood & Early Life
Fred Allen was born John Florence Sullivan in Cambridge, Massachusetts. His mother Cecilia Herlihy passed away when he was just three. His father, James Henry Sullivan, devastated by his wife’ death, took to drinking.
He and his baby brother, Robert, were brought up by their Aunt Lizzie. Eventually, Allen's father got married again and asked his sons to stay with him, however, Allen decided to stay with his aunt. 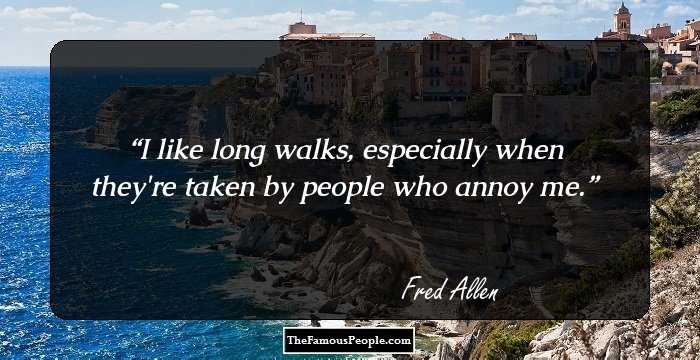 The Sexiest Men Of 2020, Ranked
Career
Allen joined piano classes and started working at the Boston Public Library and took up juggling.
He was asked by his library colleagues to do juggling and comedy for a show, they organized. While performing one of the audiences cried out ‘You ought to go on stage’ which inspired him to pursue comedy as a career.
He adopted the stage-name Fred St. James and started performing at the local vaudeville circuit at $30 a week. He toured all around the world performing monologue comedy.
In 1917, he returned to the New York circuit and changed his stage-name to Fred Allen and tried to earn more salary.
In 1922, he had the theater-curtain covered with an elaborate painting depicting a cemetery with several punch lines on the gravestones, called ‘Old Joke Cemetery’.
He left vaudeville and in 1922 started working in Shubert Brothers stage productions such as ‘The Passing Show’. The show performed remarkably in its run-up to Broadway but didn’t survive for long at the ‘Winter Garden Theatre’.
His first radio-appearance was on Chicago’s ‘WLS Showboat’ while waiting for an opportunity of a show in Arthur Hammerstein musical.
Allen and his wife were offered a Hammerstein show, ‘Polly’ with an actor called Archie Leach. ‘Polly’ never kicked off but Allen went on to do more acclaimed shows such as ‘The Little Show’ and ‘Three's a Crowd’.
He made the transition to radio with ‘The Lint Bath Club Revue’, in 1932 on CBS and the show shifted to NBC the following year with the title ‘The Salad Bowl Revue’, Allen's perfectionism led him to move from sponsor to sponsor.
Continue Reading Below
His show ‘The Salad Bowl Revue’ changed many titles and became ‘The Sal Hepatica Revue’, ‘The Hour of Smiles’ and eventually the ‘Town Hall Tonight’ between 1933 and 1940.
He hosted CBS’ ‘Texaco Star Theater’ in 1940 which was cut down to half an hour couple of years later.
‘The Fred Allen Show’, his last series, ran from 1942 to 1949 and opened each week with the young DeMarco Sisters harmoniously chiming "Oh, Mr. Allen?" as a set-up for his clever opening line.
Owing to ABC’s musical quiz, ‘Stop the Music’, and the surging popularity of television brought the show’s ratings down. He decided to take a year off for health reasons and never did a full-time show again.
Between 1940 and 1952, he acted in three important films- ‘Love Thy Neighbor’, ‘It's In the Bag!’ and ‘We're Not Married with Ginger Rogers’.
After his own show ended, Allen started appearing on Tallulah Bankhead’s NBC program ‘The Big Show’ between 1950 and 1952. He featured on 24 of the show's 57 episodes.
His following television projects also failed. He also unsuccessfully tried to revive ‘Allen's Alley’ for television. However, between 1954 and 1956, he appeared as a panelist on the CBS quiz show, ‘What’s My Line?’.
In the later phase of his life he worked mostly as newspaper columnist and came out with two memoirs, ‘Treadmill to Oblivion’ and ‘Much Ado About Me’. 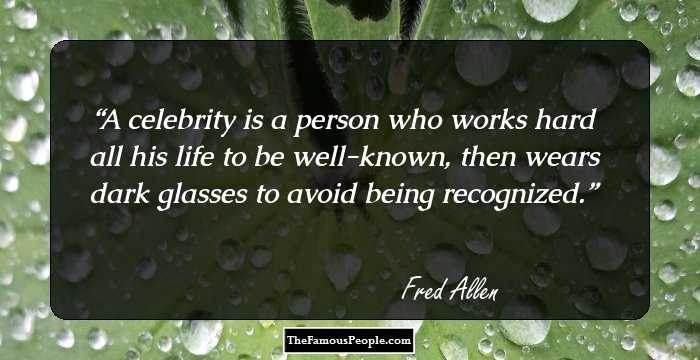 Quotes: Life
Major Works
‘Allen's Alley’, first aired in 1942 was a reoccurring sketch on ‘The Fred Allen Show’ satirizing small town America which showed the comedian and his wife meet a colorful array of exaggerated characters.
Awards & Achievements
Allen had two stars on Hollywood Walk of Fame: a radio star at 6713 and a TV star at 700, Hollywood Boulevard. 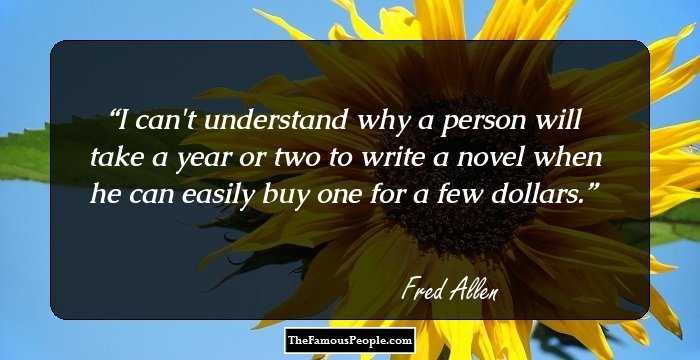 Quotes: Will, I
Personal Life & Legacy
He got married to Portland Hoffa, in 1927, who also appeared on his ‘Allen’ Alley’ sketch.
He died on March 17, 1956 following a heart attack and was laid to rest at Gate of Heaven Cemetery in Hawthorne, New York.
Trivia
This comedian once said, “A celebrity is a person who works hard all his life to become well known, then wears dark glasses to avoid being recognized”.
You May Like

See the events in life of Fred Allen in Chronological Order