Advanced Search
Joe Namath is a former American football quarterback. He played in the AFL and NFL and earned the title of ‘Broadway Joe’ for his off-field activities and reveling. His name was flagged in sports history with his performance in the Superbowl III and he brought upon more attention on himself when he was selected to play for the Los Angeles Rams, a National Football League team. His overall career was an impressive one, but the highlight was when he once, confidently assured the Jets’ victory over the NFL team, Baltimore Colts. His predictions were right as he led his team to a stunning 16-7 victory. Throughout his career, he participated in 143 games and has had a total of 68 wins with his team, 71 losses, 4 ties and 173 touchdowns. He was inducted into the ‘Pro Football Hall of Fame’ and is currently regarded as one of the most important former players of the NFL. Apart from his flourishing football career, Namath has also starred in a few selected movies such as ‘C.C. and Company’ and appeared on television shows like, ‘Here’s Lucy’, ‘The Brady Brunch’, ‘The Simpsons’ and ‘The Dean Martin Show’. His popularity in the world of entertainment grew so much that he even hosted his very own ‘The Joe Namath Show’ for a brief period of time.

American People
American Men
University Of Alabama
Tall Celebrities
Tall Male Celebrities
Childhood & Early Life
Joseph William ‘Joe’ Namath was born in Beaver Falls, Beaver County, Pennsylvania. He was close to both his parents, but lived with his mother after the couple divorced.
While in school, he was spectacular in basketball, baseball and football. He participated in his school football team, which would go on to win the WPIAL Class AA Championship.
After he graduated, he received a number of offers from Major League Baseball teams, but he always wanted to build a career in football.
He was given a number of offers from Division I college football programs including Penn State, Alabama and Notre Dame University. After Alabama’s head coach, Bear Bryant’s offer, Namath accepted a full scholarship.
From 1962 to 1964, he played for the Alabama Crimson Tide football team and led the team to a National Championship. After the death of his coach, Namath was left heartbroken.
He did not receive his college degree, which he willingly pursued much later in his life. 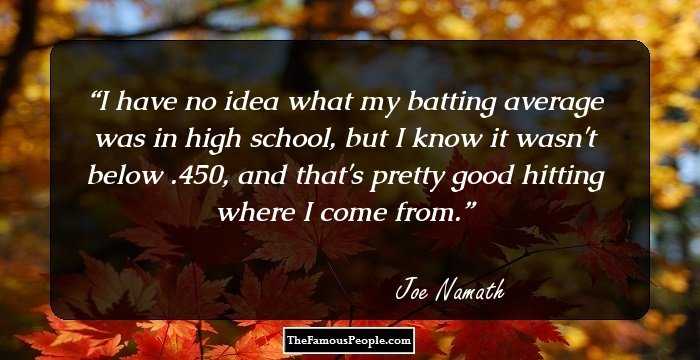 Continue Reading Below
Career
He was drafted in the upstart American Football League and the National Football League on November 28, 1964. As NFL drafted him 12th overall and AFL drafted him as their first pick with the ‘Jets’, he decided to sign a contract with the Jets.
For the 1967 season, he became the first quarterback to pass 4000 yards in one season. The next year, he led the Jets to a 27-23 win over the defending AFL champions, ‘Oakland Riders’.
1969 proved to be the highlight year of his career, when the Jets had a 16-7 win over the Baltimore Colts. This is considered one of his career high-points because he became the first-quarterback to ever win a national championship game in college, a major professional league championship and a Super Bowl.
In 1969, he also hosted his very own show, ‘The Joe Namath Show’, with guest-host, Dick Schaap.
After the season, he opened his very own Upper East Side bar, ‘Bachelors III’. However, since his reputation was at stake, the NFL commissioner asked him to dissociate himself from the bar.
In 1974, during a game against the city rival, New York Giants, he led the Jets to a 26-20 victory. Namath was then offered a chance to play with the ‘Chicago Winds’ from the ‘World Football League’. However, due to a certain demand made by Namath, the offer was taken back by the Winds and he continued to play with the Jets.
He was signed on by the National Football League team, the ‘Los Angeles Rams’ on May 12, 1977. However, his career with the Rams was not at all illustrious, due to a series of knee injuries which he suffered from.
He also briefly acted in a few films and television shows. He guest-starred on shows like ‘Married…With Children’, ‘The Flip Wilson Show’, ‘Rowan and Martin’s Laugh-In’ and ‘The John Larroquette Show’. Apart from television he has appeared on Broadway shows, which earned him his nickname such as, ‘Damn Yankees’, ‘Fiddler on the Roof’, ‘The Caine Mutiny Court Martial’ and ‘Lil’ Abner’.
He was also a color commentator for NFL games, especially for the 1985 season of ‘Monday Night Football’. Three years later, he auditioned to host the show, ‘Family Feud’ but the role was given to Ray Combs instead.
Continue Reading Below
He currently hosts, ‘The Competitive Edge’, a business show. He was invited as a guest speaker at the Pro Football Hall of Fame on June 2, 2013. 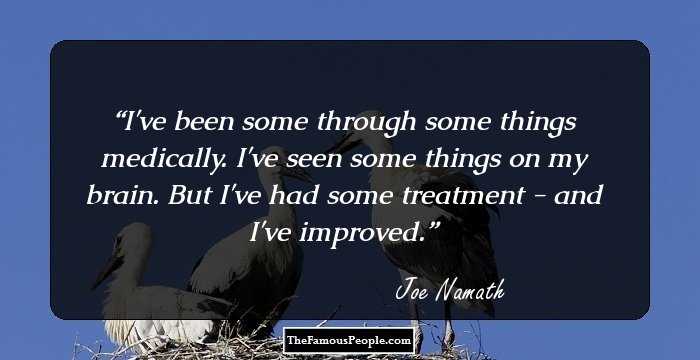 Awards & Achievements
He received the American Football League Rookie of the Year, in 1965.
He is the proud recipient of the Hickok Belt, which he earned in 1968.
In 1969, he won the AFL-NFL Super Bowl MVP.
He won the NFL Comeback Player of the Year Award, in 1974.
Personal Life & Legacy
He married Deborah Mays in 1984. While he was 41 at the time of wedding, Deborah was just 22 years old. They couple was blessed with two children, Jessica and Olivia.
They divorced in 2000 and following the split, his daughters chose to live with him.
He is known for publicly admitting to his alcohol problem. He even entered an outpatient treatment program for alcohol on January 12, 2004. He has written about his experiences with alcohol in the book, ‘Namath’.
Apart from his career in football, he has spent many years appearing as a rooter for golf tournaments and other causes, such as youth camps and football camps.
He also opened a number of bars under the name of ‘Broadway Joe’ in Alabama and New York City.
In 2006, a biography titled ‘Namath’ was written by Mark Kriegel and published by Rugged Land Books.
In 2007, he enrolled in the University of Alabama’s External degree program and earned his B.A. in interdisciplinary studies the same year. 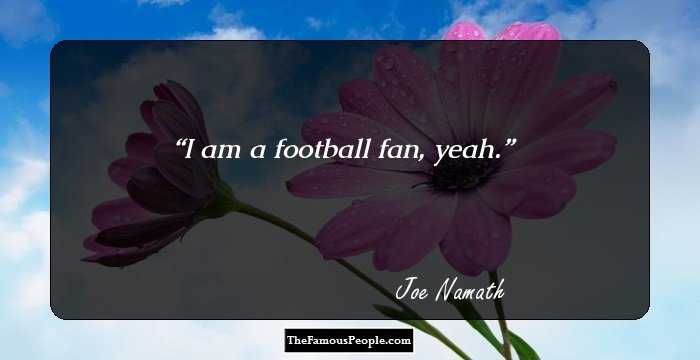 Trivia
The ‘Jaw-Strap’ helmet was designed after this famous American AFL-NFL player fractured his jaw, when he was maltreated by an Oakland lineman during a game with ‘The Oakland Raiders’.

See the events in life of Joe Namath in Chronological Order