(Actress and Model Known for Her Films: 'The Texas Chainsaw Massacre' and 'Ulee's Gold')

Advanced Search
Jessica Biel is a celebrated model and actress of American origin. She started her modelling career at a very young age. After receiving a scholarship in a convention, she attended acting classes at Young Actor’s Space. She came into the limelight as part of ‘7th Heaven’ of WB series by portraying the character of Mary Camden. Though this role earned her huge popularity, yet she felt that the image of Mary Camden as a good girl would limit her acting ability. To break the image, she appeared partially clothed for the cover picture of “Gear” magazine. This act of Jessica created much uproar among her fans. She left the television series ‘7th Heaven’ after performing in its sixth season. Her praiseworthy acting in the role of a teenager Casey Jackson in the film ‘Ulee’s Gold’ brought her instant fame. She even won the Best Supporting Young Actress for this film. The comedy film ‘Summer Catch’ bears the proof of her brilliant acting ability. In spite of her stellar performance in ‘the Rules of Attraction’, her film did not receive much success. Later, her acting in the horror film ‘The Texas Chainshaw Massacre’ caught public’s attention. She has also acted in suspense film and has proved herself as a serious actress. American People
American Women
Minnesota Actresses
Pisces Actresses
American Actresses
Childhood & Early Life
Born in Ely, Minnesota, Jessica Biel’s father Jonathan Biel is an entrepreneur and business consultant and her mother Kimberley is a spiritual healer and homemaker. Jessica has a younger brother.
She has spent her childhood in six different states in America. She started attending dance classes when she was very young. Simultaneously, attending voice coaching.
In 1994, she signed a contract with a talent agency in Denver and started modelling. At the same time, she attended an International Modelling & Talent Association convention.
In this convention, she received a scholarship to attend the Young Actor’s Space in Los Angeles. She attended the acting classes for three years. During this time, she used to go for auditions along with pursuing her studies at school.
In 1996, she played the role of Mary Camden on the WB series ‘7th Heaven’, a successful family drama. In 1997, she proved her acting prowess by portraying the role of Peter Fonda’s granddaughter in the film ‘Ulee’s Gold’, released in 1997.
In the next year, she acted with Jonathan Taylor Thomas in a comedy film titled ‘I’ll be Home for Christmas’. In 1999, her name featured in “People” magazine’s ’50 Most Beautiful People’.
In 2000, her partially clothed picture for the cover of “Gear” magazine created lots of controversy. At that time, she was also working for ‘7th Heaven’ which gained popularity among conservative viewers.
In 2000, she took admission at Tufts University, Massachusetts. At the same time, she continued acting in ‘7th Heaven’. After its sixth season, she left the show.
After she completed her first year at college she decided to focus on her acting career. Therefore, she returned to Los Angeles and planned to act in feature films. 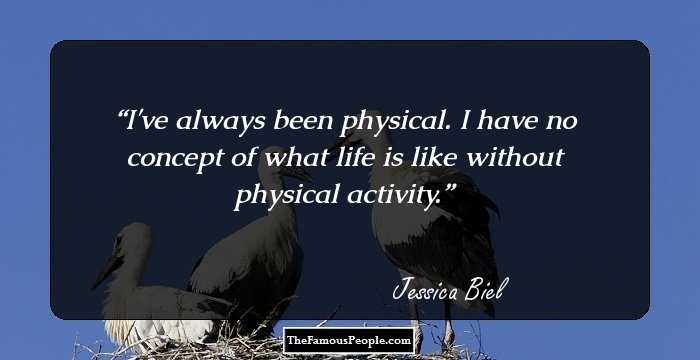 Quotes: Life, Like
Continue Reading Below
Career
She acted opposite Freddie Prinze Jr. in comedy film ‘Summer Catch’, released in 2001.In the following year, she portrayed the bold character of a college student Lara Halleran in ‘The Rules of Attraction’. Unfortunately, the film bombed at box office.
In 2003, her film ‘The Texas Chainshaw Massacre’ was released. In it, she acted as Erin. This horror film received success at the box office. Released in 2004, the film ‘Cellular’ marks her stellar performance opposite Chris Evans
In 2005, her film ‘Stealth’ was released. In this film, she acted as a fighter pilot opposite Jamie Foxx and Josh Lucas. She acted with Chris Evans for the second time in the film ‘London’ which was released in 2005.
In the same year, her film ‘Elizabethtown’ was released. This film marked her outstanding performance as a young office worker opposite Orlando Bloom.
In her film ‘Home of the Brave’, she presented the character of a discharged soldier and her problems of being a single mother.
After working opposite Nicolas Cage in ‘Next’ in 2007, she played the role of a lawyer in the comedy film ‘I Now Pronounce You Chuck and Larry’ in the same year. This film received huge success.
She made a guest appearance on an episode of ‘Saturday Night Live’ in which she played the role of Jessica Rabbit, a cartoon character. Released in 2009, the film ‘Easy Virtue’ features her mind blowing acting as Larita, an American lady married to a British man. Her acting in this film brought her critical acclaim.
Released in 2010, the film ‘Valentine’s Day’ shows her portraying the role of a publicist and her relationship with a reporter. She played the role of an army captain in the film ‘The A-Team’ that was released in 2010.
In 2011, she acted in ‘New Year’s Eve’, a romantic comedy film in which she portrayed the role of a young woman. In 2012, the film ‘Total Recall’ presented her in the role of a resistance leader. In the same year, she featured in ‘Hitchcock’, a biographical film. 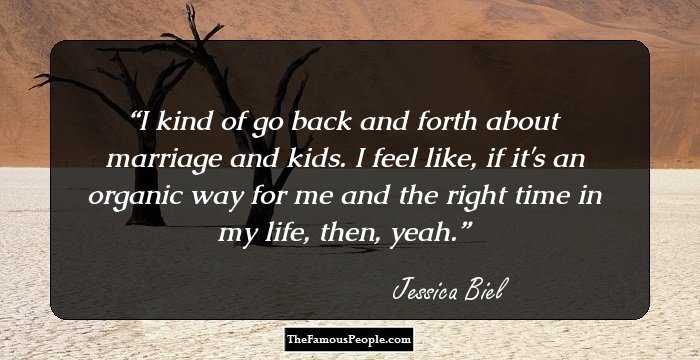 Quotes: Life, Time
Major Works
She portrayed Abigail Whistler, a leader of a group of human vampire in ‘Blade: Trinity’. Released in 2004, this horror film shows her supernatural activitiues as a vampire.
Her portrayal of the Eastern European noblewoman Sophie in ‘The Illusionist’ in 2006, established her as a serious actress. In this film she acted opposite actor Edward Norton.
Personal Life & Legacy
She dated singer and actor Justin Timberlake in 2007. The couple broke up in March 2011. They reunited in the same year. She married Timberlake on October 19, 2012 in Italy. 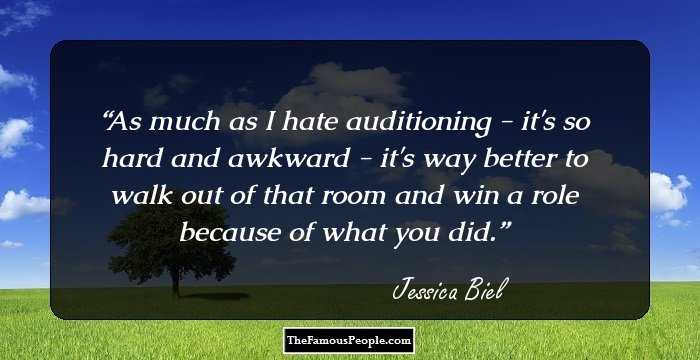 Trivia
This celebrated Hollywood actress was a part of ‘Summit on the Summit' campaign and climbed to the summit of Mount Kilimanjaro to spread awareness about the global water crisis.

Quotes By Jessica Biel | Quote Of The Day | Top 100 Quotes

See the events in life of Jessica Biel in Chronological Order